Bagan is unquestionably one of Asia’s  – indeed the world’s – great sights: a vast swathe of temples and pagodas rising from the hot flat plains bordering the Ayeyarwady River, the landscape bristling with uncountable shrines and stupas which carpet the countryside in an almost surreal profusion and stretch as far as the eye can see in every direction. 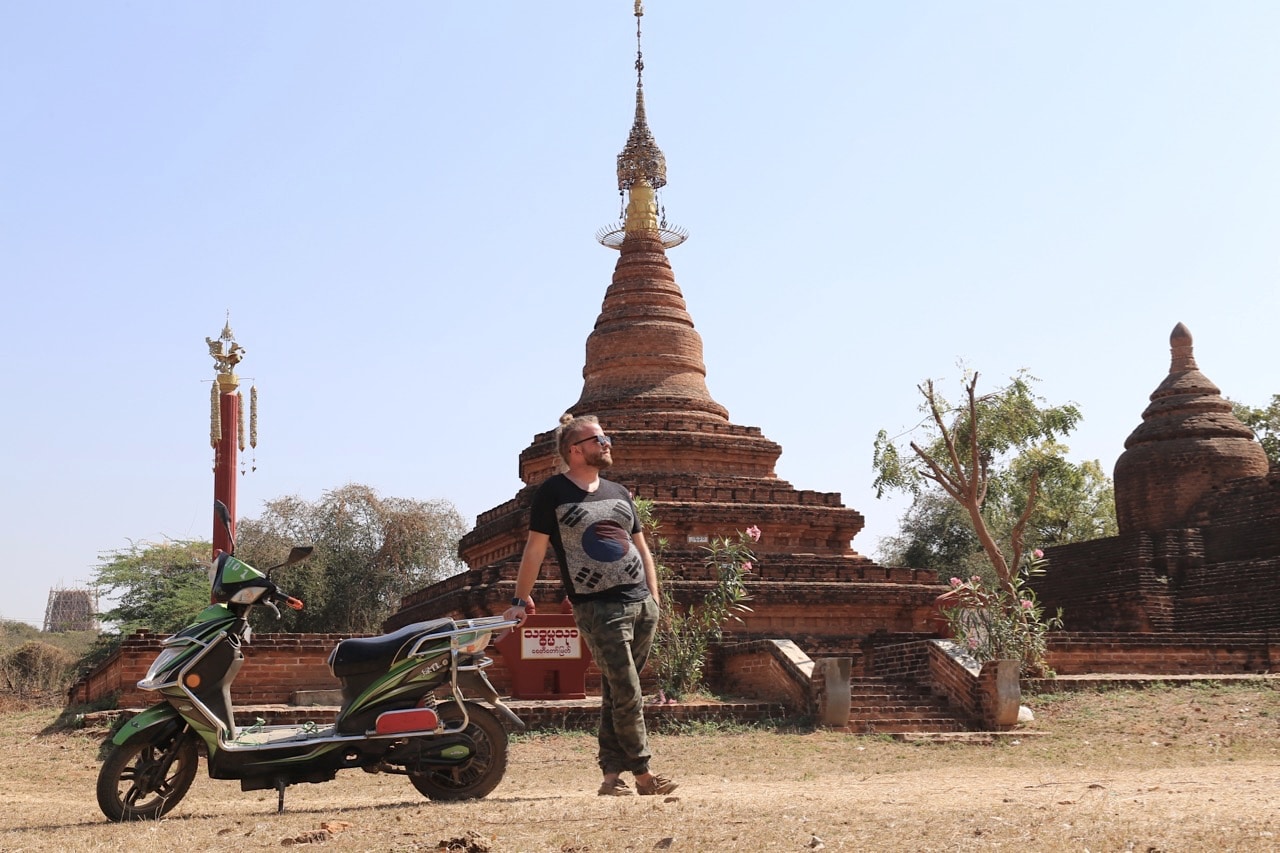 Over two thousand temples lie scattered over an area of almost seventy square kilometres, constructed in one of history’s most extravagant extended building booms over two centuries between 1050 and 1280. As an architectural showpiece Bagan is rivalled only by the roughly contemporaneous Temples of Angkor in Cambodia, although while the major monuments in Angkor have now disappeared under a flood of coach parties, the temples of Bagan remain relatively free from crowds, and still retain much of their prevailing magic and mystery. 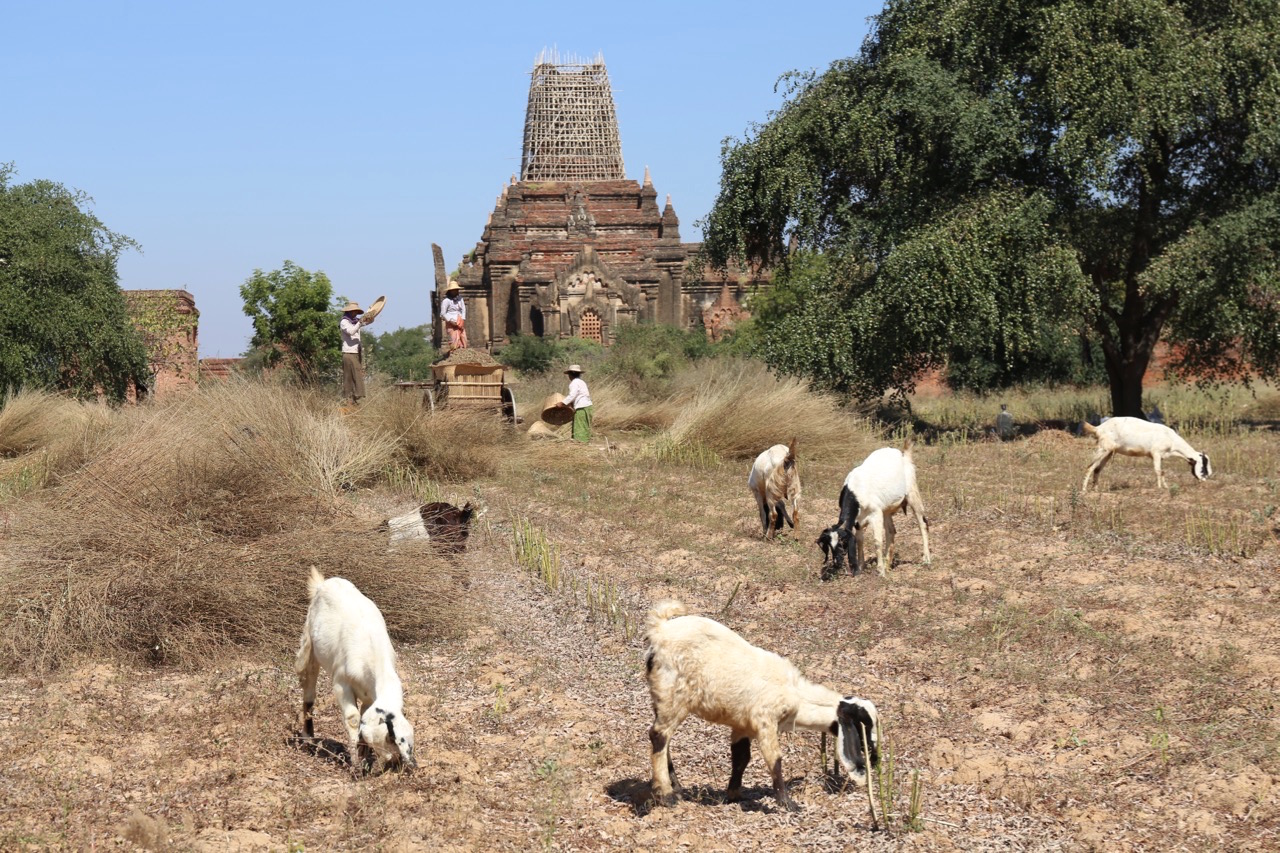 The best way to explore Bagan’s temples in Myanmar is by hiring an E-bike (at time of writing they were renting for $7 a day). Bicycles are also an option but peddling around in the hot midday heat means you’ll cover a lot less ground. You can see plenty of temples if you dedicate two full days zipping around on your scooter. Be sure to plan out your route in advance, plotting each stop on Google Maps and you’re far less likely to get lost (thank God for the iPhone compass).

I’d suggest checking out Bagan’s most famous temples on day one. Then spend day two off the paved roads, whipping your way across sandy paths where you’re likely to say hello to friendly goat herders, local farmers harvesting wheat and tiny villages untouched by time. 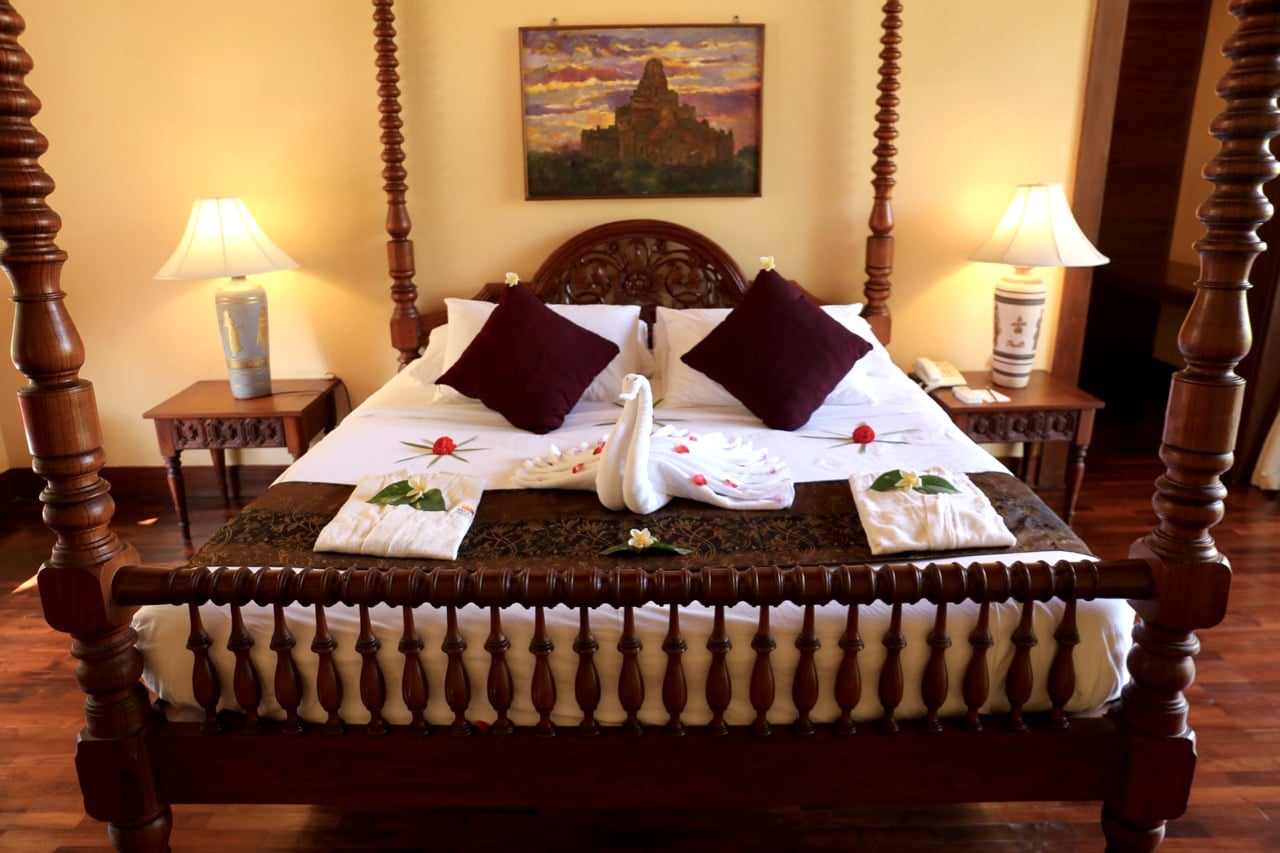 The Hotel at Tharabar Gate is the most stylish – and expensive – of Old Bagan’s hotels, with bungalow-style accommodation scattered around exquisite gardens. The spacious, wooden-floored rooms come with all mod cons and are decorated with an attractive blend of modern chic and traditional paintings and artefacts. 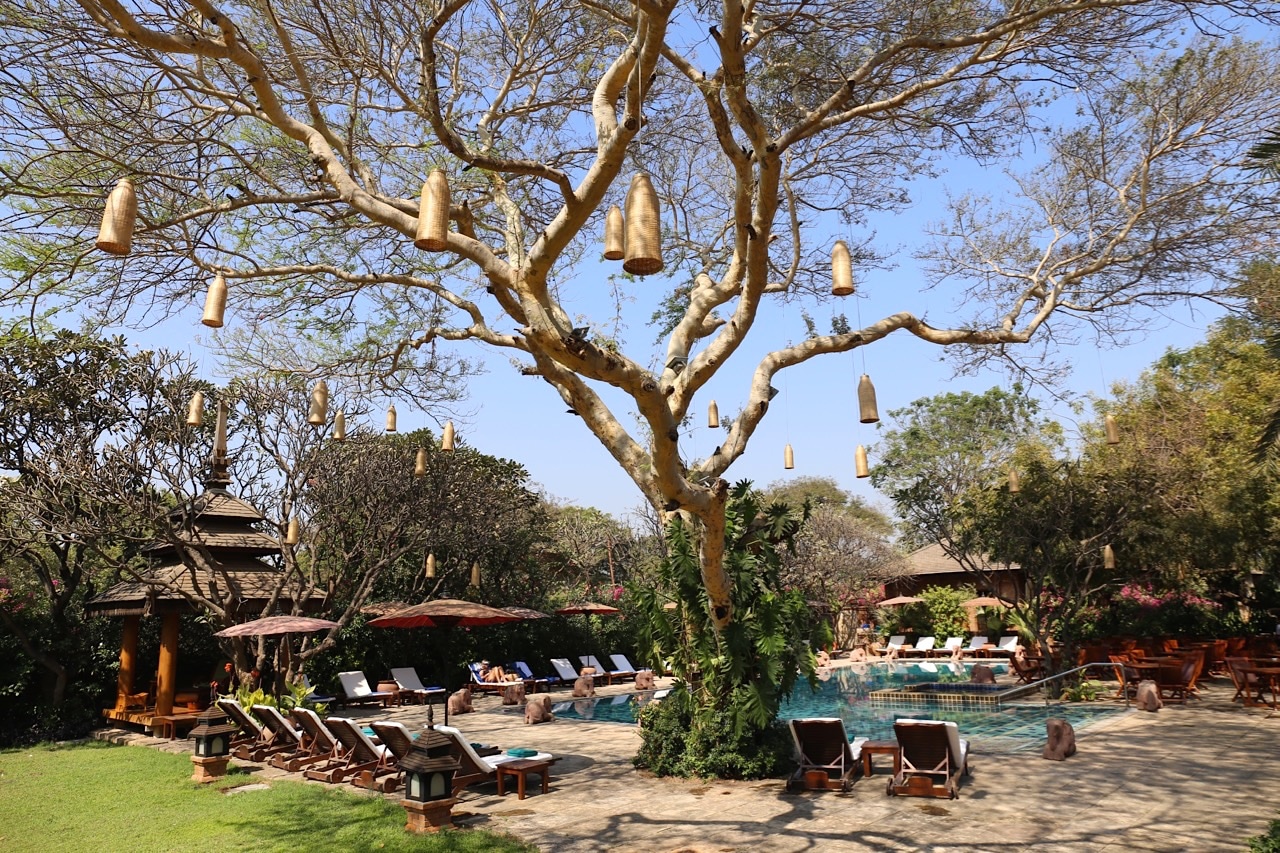 Most guests wake up at the crack of dawn to watch the sunrise, arriving back at the hotel for a late lunch after spending 6 hours or so snapping photos of Bagan’s ancient architectural wonders. It’s best to relax by the hotel’s cool pool in the middle of the day when temperatures rise astronomically. Surrounded by a choir of stone elephants, it’s the perfect verdant oasis to rest and relax. 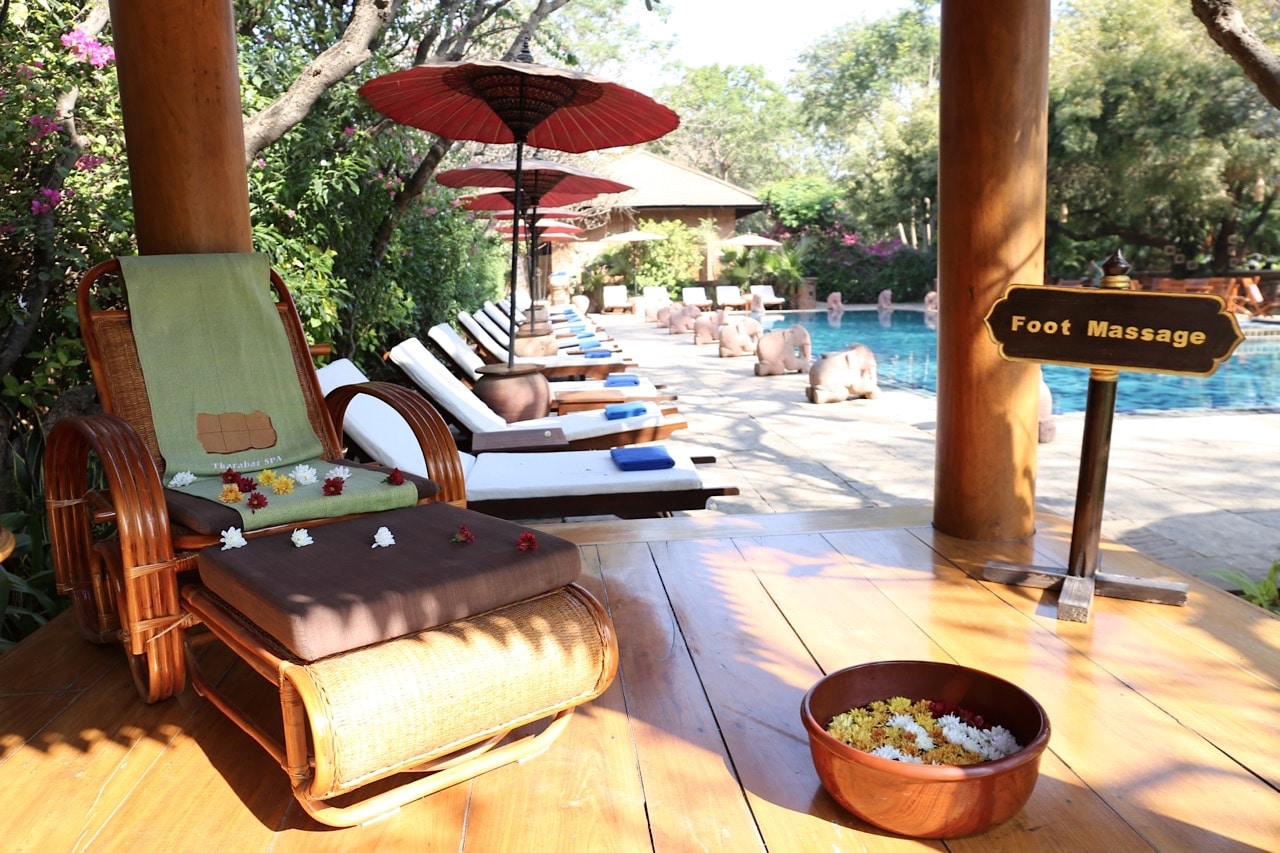 After climbing barefoot up Bagan’s ancient ruins you’ll likely find your hips hurting, feet swollen and back aching. Be sure to book yourself a moment of R&R at the hotel’s serine spa as a reward for all your hard work. Guests can enjoy a soothing foot massage at a cabana overlooking the pool, or if a full body massage is in order skip over to the spa to get all the kinks out. 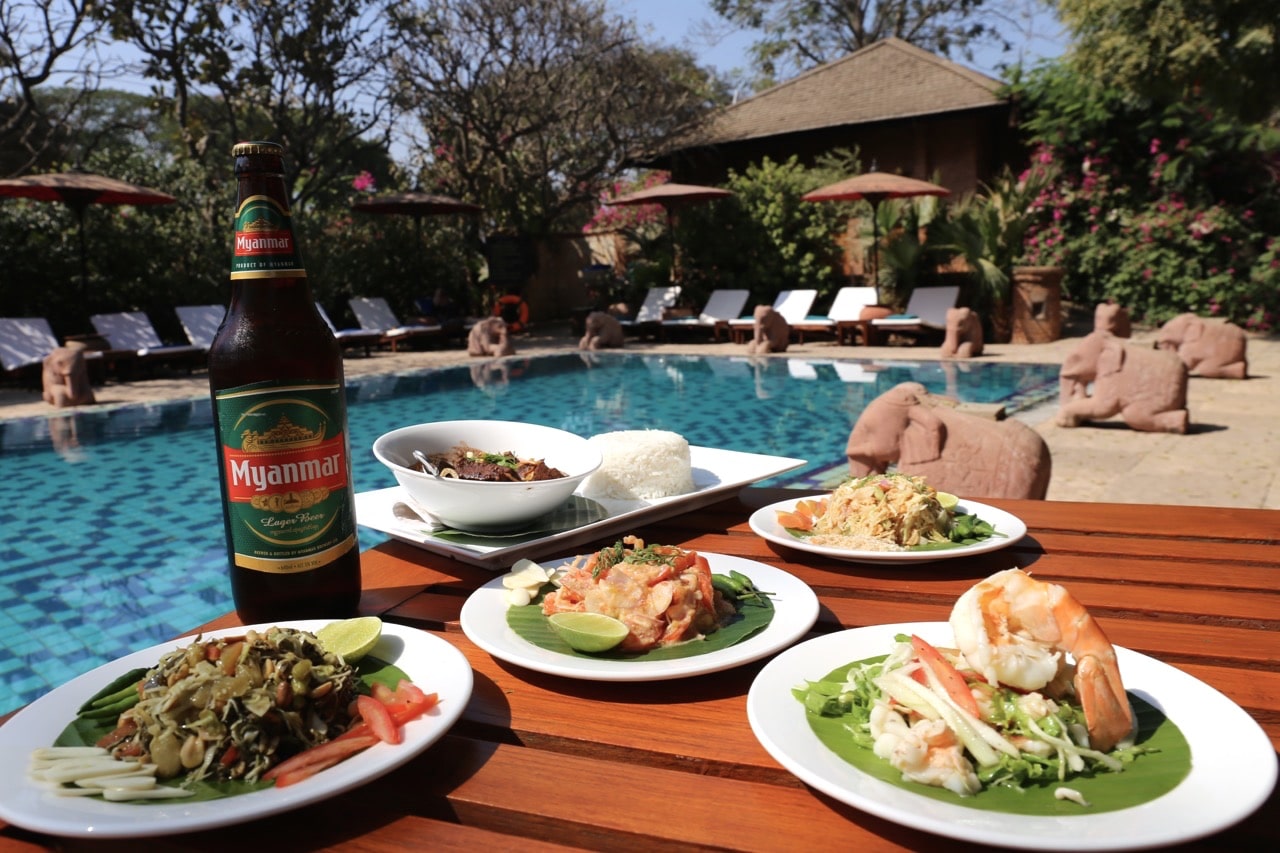 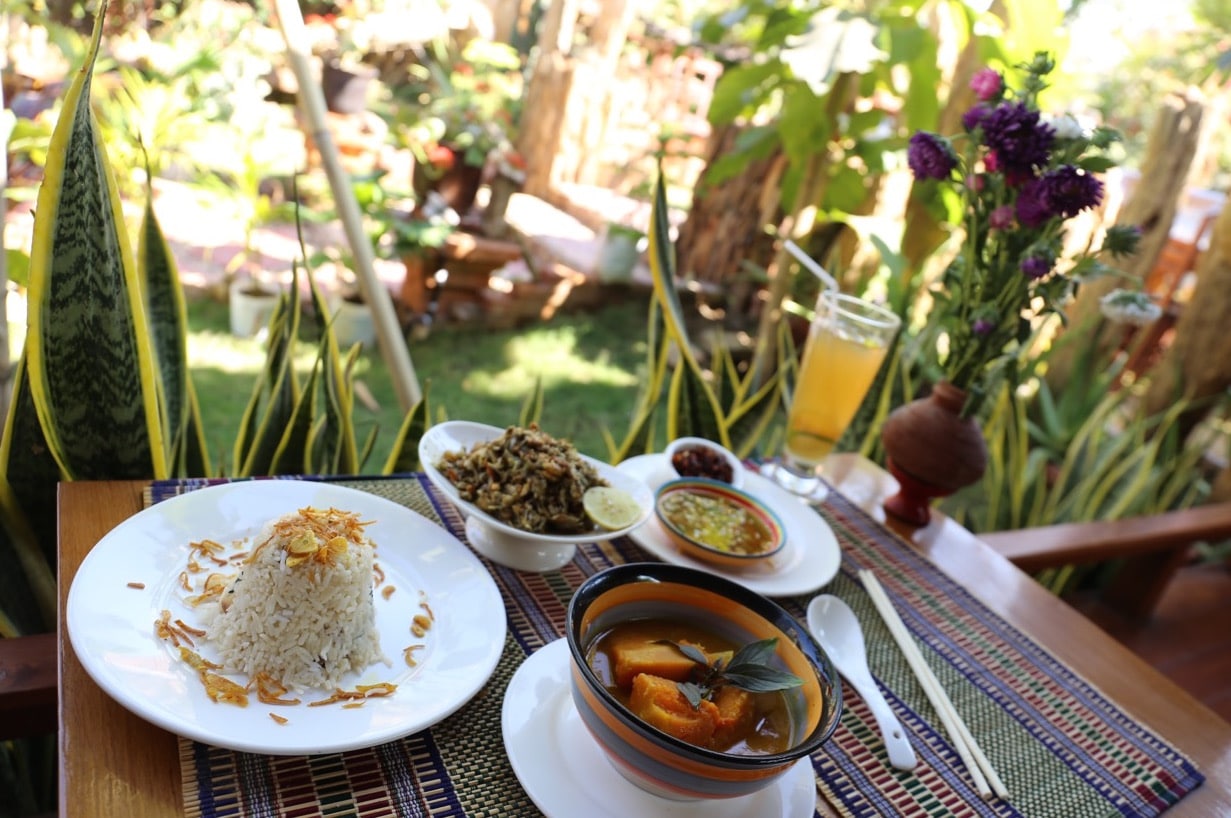 Be Kind to Animals The Moon is one of Bagan’s most popular restaurants, with a name you won’t soon forget. The vegetarian restaurant in New Bagan is surrounded by ancient temples and smack dab in the middle of a lush garden. Slurp through a lime spiked iced tea while nibbling through classic fermented tea leaf salad, sweet coconut rice and steaming bowl of pumpkin curry.

Things to Do in Yangon

The Savoy Hotel Offers an Oasis in the Heart of Yangon

Things To Do on Myanmar’s Inle Lake 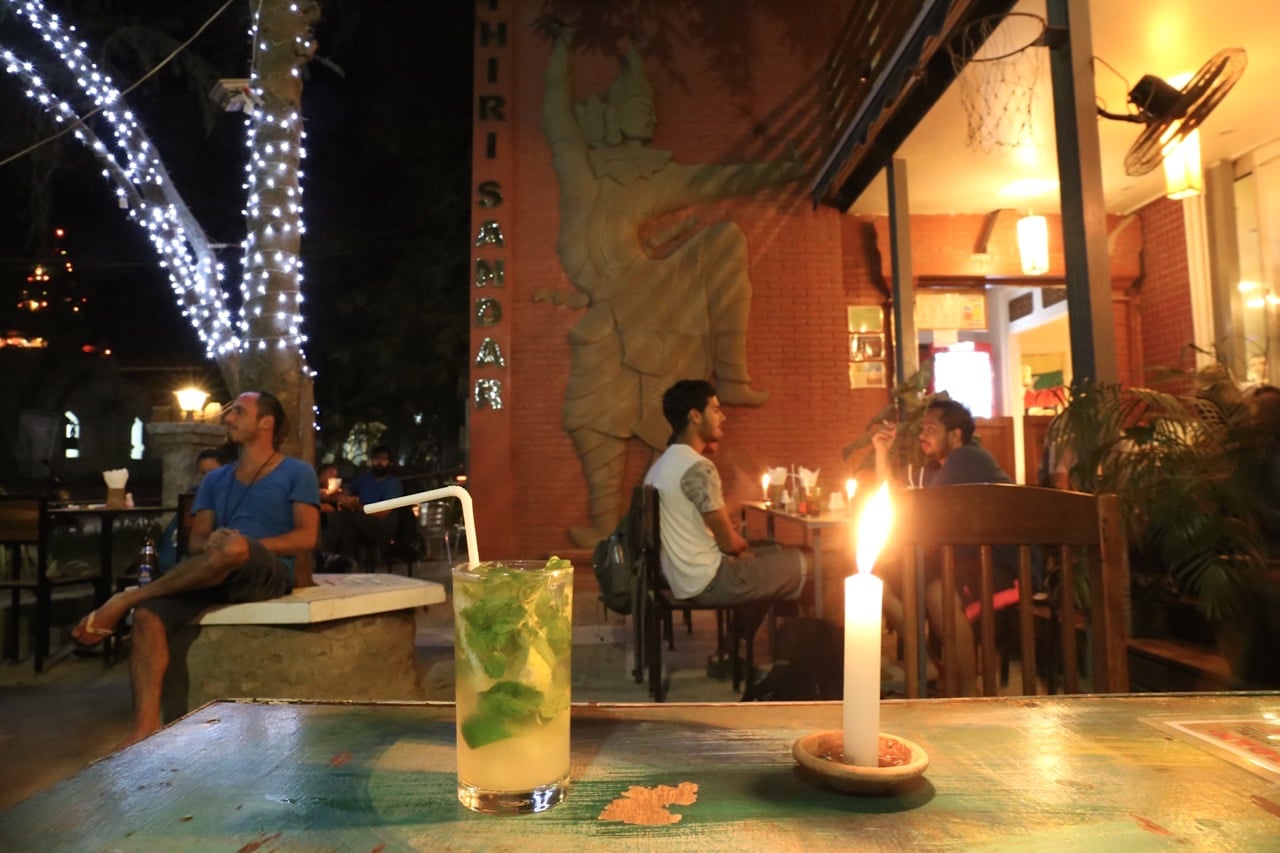 Bagan has a very different vibe than Siem Reap’s Angkor Watt. It’s very much an active pilgrimage site for Buddhist’s and perhaps the world’s top destination for photographers wooed by early morning postcard perfect sunrise. While you won’t find a party town here (sorry nighthawk’s save your all-nighters for Bangkok) the best place in town to enjoy a cocktail and rub shoulders with like minded wanderlusters is Ostello Bello Bagan. 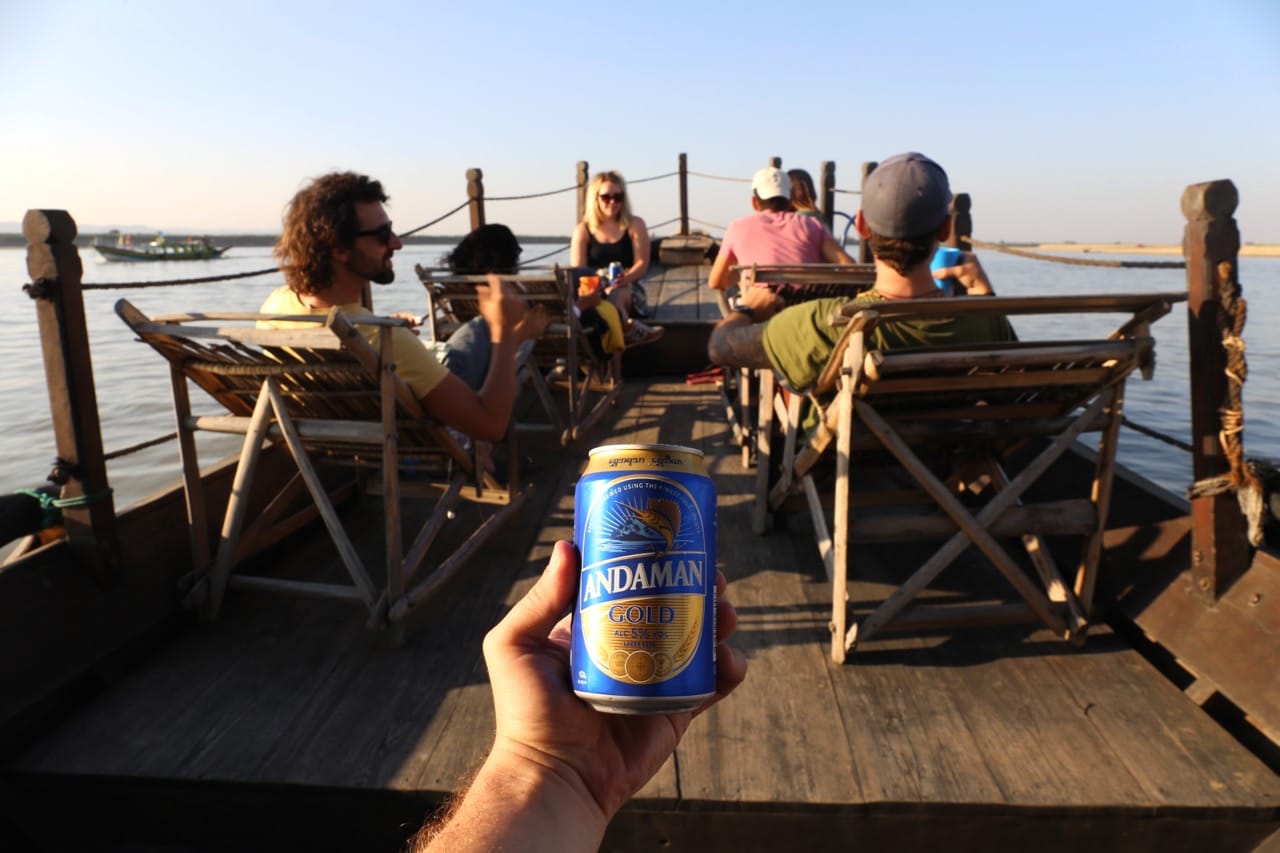 One of the funnest ways to enjoy the sunset is by hopping on a cruise with Bagan Boat Trips. The three our trip departs from the jetty shortly after 4pm and features local snacks (corn fritters, deep fried tofu) and a wee bar featuring ice cold Andaman beer, gin and tonics and rum and coke’s. Plop yourself down on a bamboo lounge chair and watch the sun splash across the horizon. 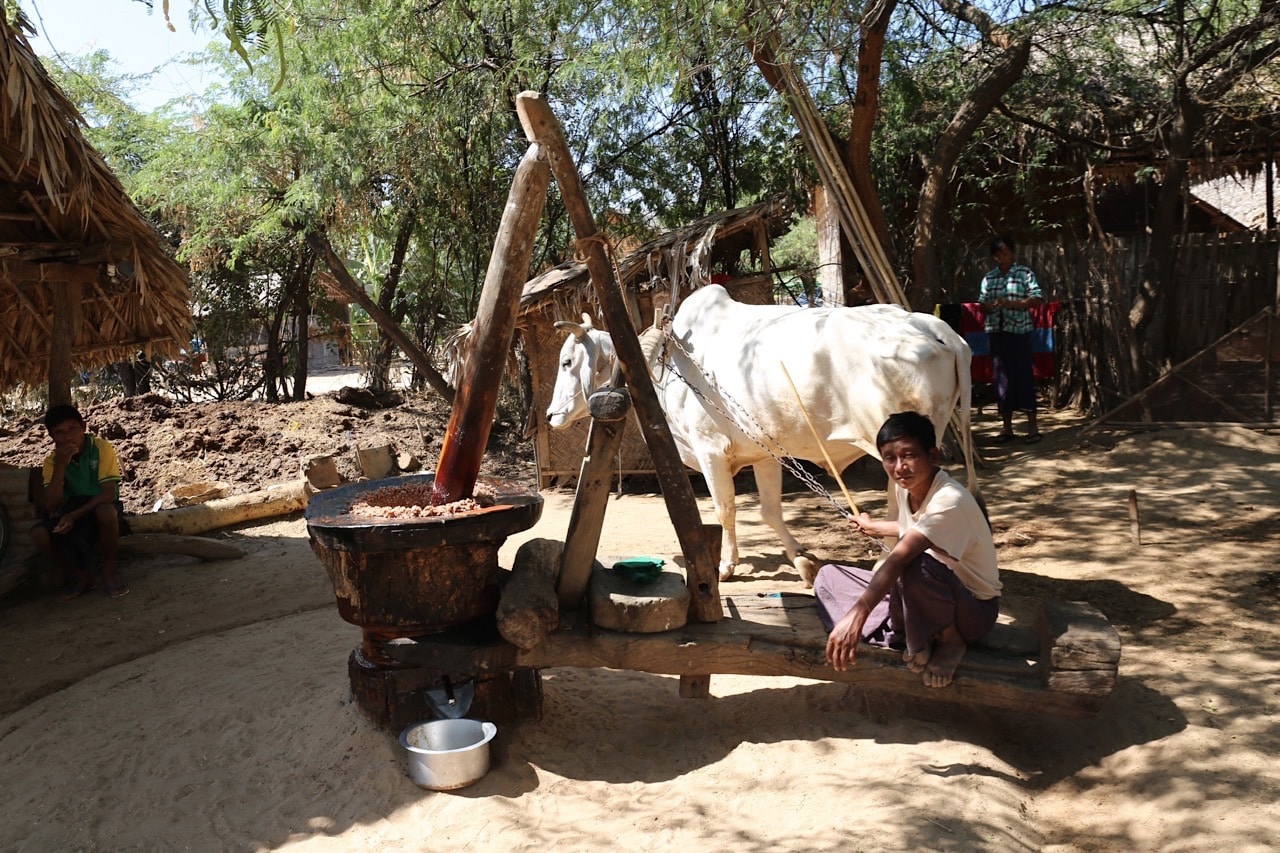 If you’re keen on experiencing the local way of life spend a morning wandering through picturesque Minnathu Village. Located just off Bagan’s tourist trail and surrounded by lesser-known temples, Minnathu locals are delighted to showcase their wee town to those who visit. You’ll find artisan shops, authentic farmers kitchens and plenty of creamy white cows which wander the streets. I was delighted to be invited into a family’s backyard where the man of the house was proud to show me how they produce peanut oil. He sat cross-legged on an old-school wooden apparatus as a bull ground the peanuts into a fine paste while walking in slow circles. 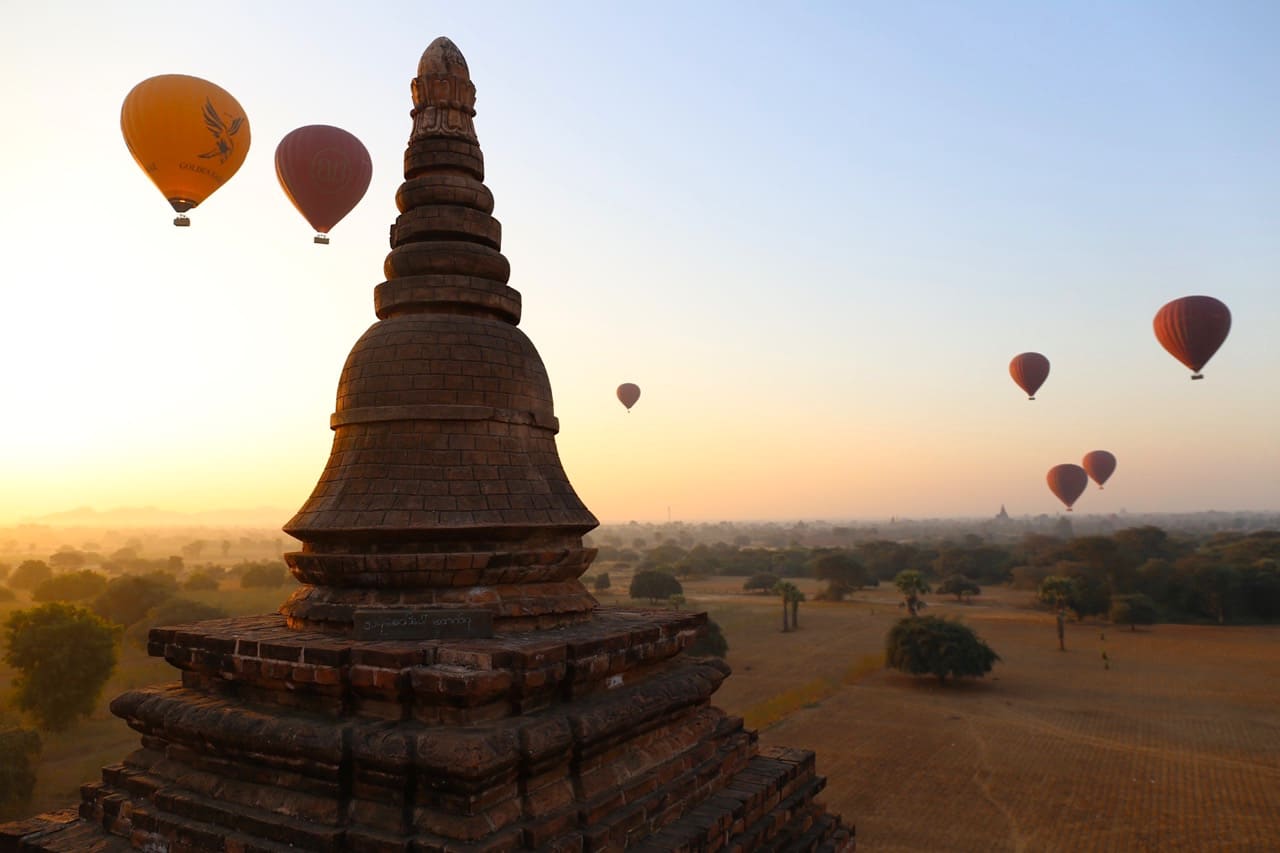 Pya Tha Da Temple is the perfect spot to enjoy sunrise in Bagan. Wake up early and climb the temples steep stairs and wait patiently for a parade of hot air balloons to waft by. It’s one of Bagan’s lesser known sunrise spots so you’ll avoid the chatter of tourist hoards and can truly enjoy a moment of quiet calm as the sun peaks over temple dotted landscape. 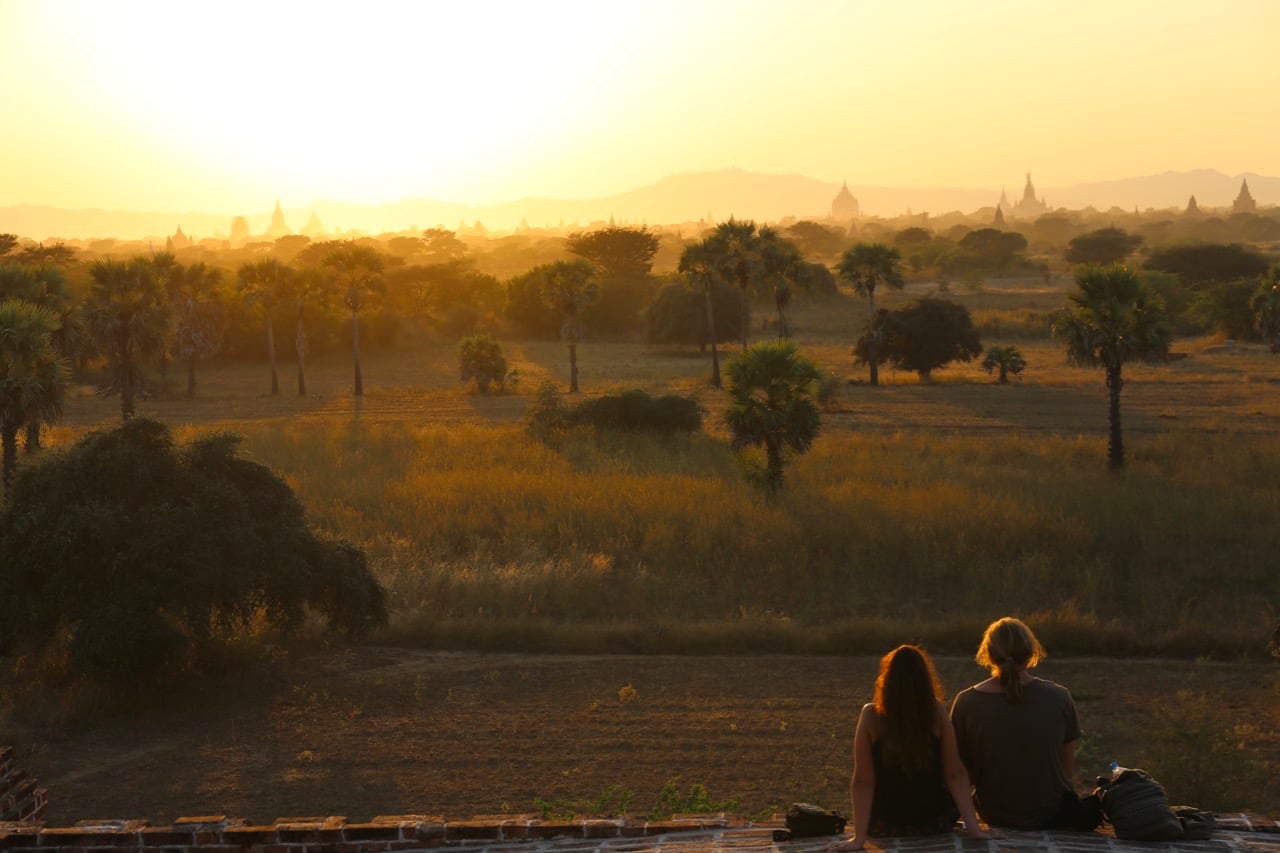 Similarly at sunset, if you’re keen to avoid tourist hoards in the evening, skip the major temples and enjoy a bit of off-roading on your bike in search of Temple 446. The simply titled temple is surrounded by farmers fields and requires a bit of a two-wheel adventure which will have you zig-zagging through sand filled paths and whipping across a grassy meadow. You’ll have to tuck your head towards your knees to make it up the dark and tiny staircase which leads to the temples roomy rooftop. Once you’ve arrived take a deep breath then sit back and relax as golden rays hug the landscape and moody temple tops force a jaw drop. 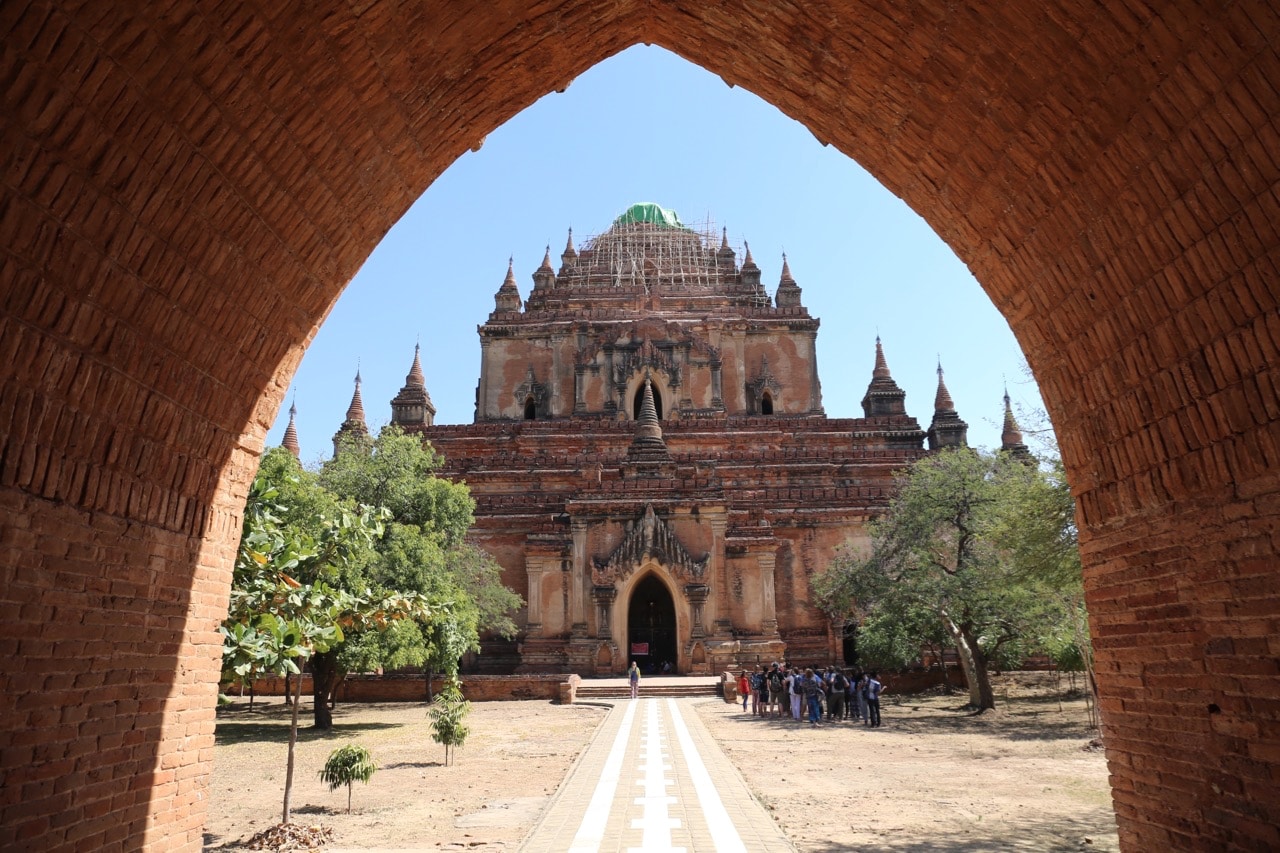 Sitting in splendid isolation more or less at the dead centre of the archaeological zone is the magnificent Sulamani Paya, built by King Narapatisithu in 1183. The Sulamani isn’t the biggest or tallest of Bagan’s myriad temples but for many people it’s the most beautiful of all of the monuments here. The exterior boasts fine plasterwork along with unusual green and yellow glazed decorative tiles. 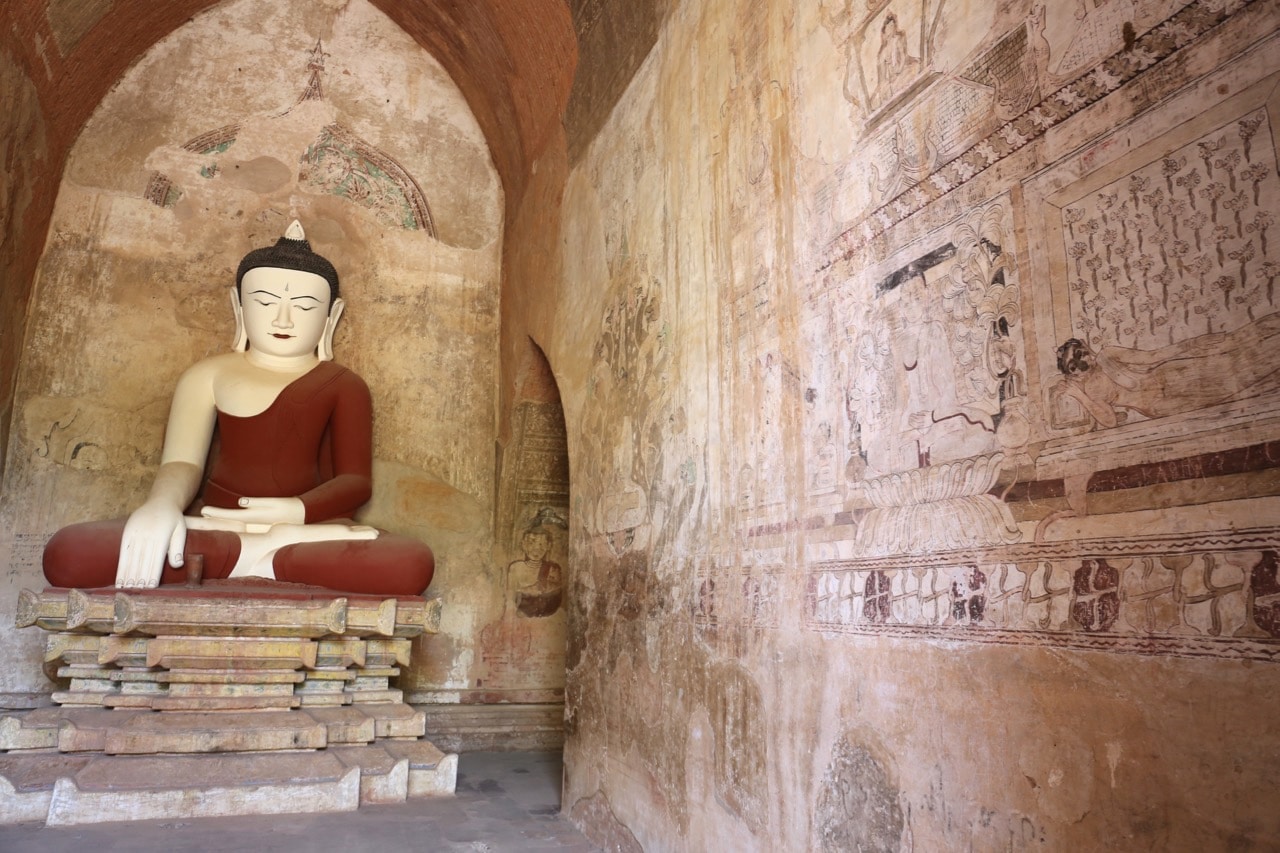 Inside, the temple’s entertaining murals are eighteenth-century Konbaung-era addition, with large figures (including a couple of huge reclining Buddhas) painted in an engagingly naive style. The temple is currently inaccessible to tourists as it was sadly damaged during the recent earthquake. You can still enjoy the temple’s awesome interiors by tip toeing around the temple walls and peeping through each gate. 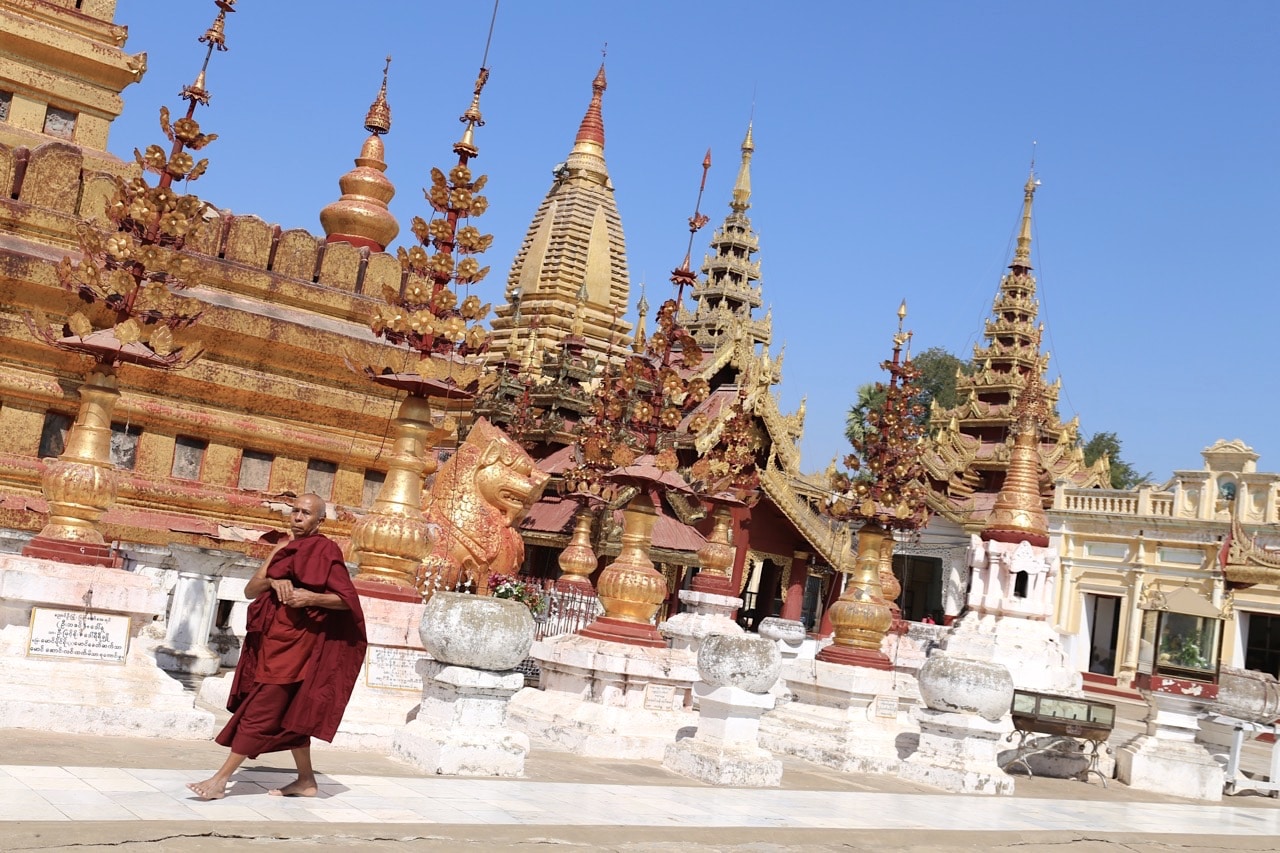 The most important pilgrimage site in Bagan, the Shwezigon Pagoda feels quite different from the other temples of Bagan – closer in appearance and atmosphere to the great working temples of Yangon than the historic monuments elsewhere in the city, with its enormous gilded stupa surrounded by a colourful complex of subsidiary shrines.

Long covered passages, each flanked by a huge pair of white chinthe, lead into the temple from the south and east. Inside, the complex is dominated by its vast stupa, set atop three battlemented terraces, with elaborate red-carpeted staircases flanked with lions rising to the summit. 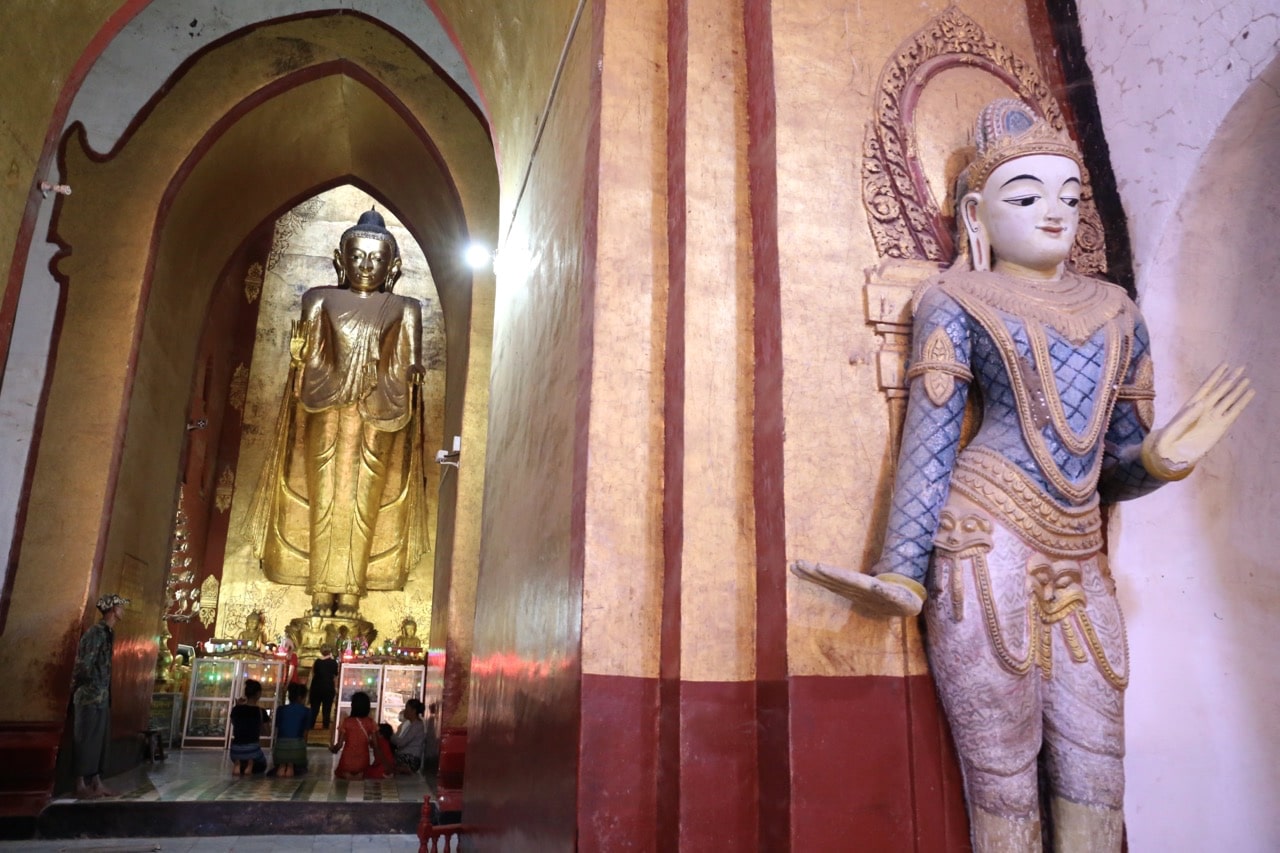 Completed in 1090 during the reign of King Kyansittha, the Ananda Paya is one of the largest and most stunning of all the Bagan temples, its landmark spire rising 52m high above the surrounding plains. The Ananda is generally considered the culminating masterpiece of early-period Bagan architecture, although it also hits at the city’s later architectural style, with its six rooftop terraces and soaring spire giving it an upwardly mobile profile quite unlike earlier, horizontally challenged designs.

The Ananda boasts one of Bagan’s finest interiors. The four entrances are each protected by a pair of door guardians seated in niches. Four enormous Buddhas stand on each side of the temple’s central core, with further pairs of guardian figures in front. 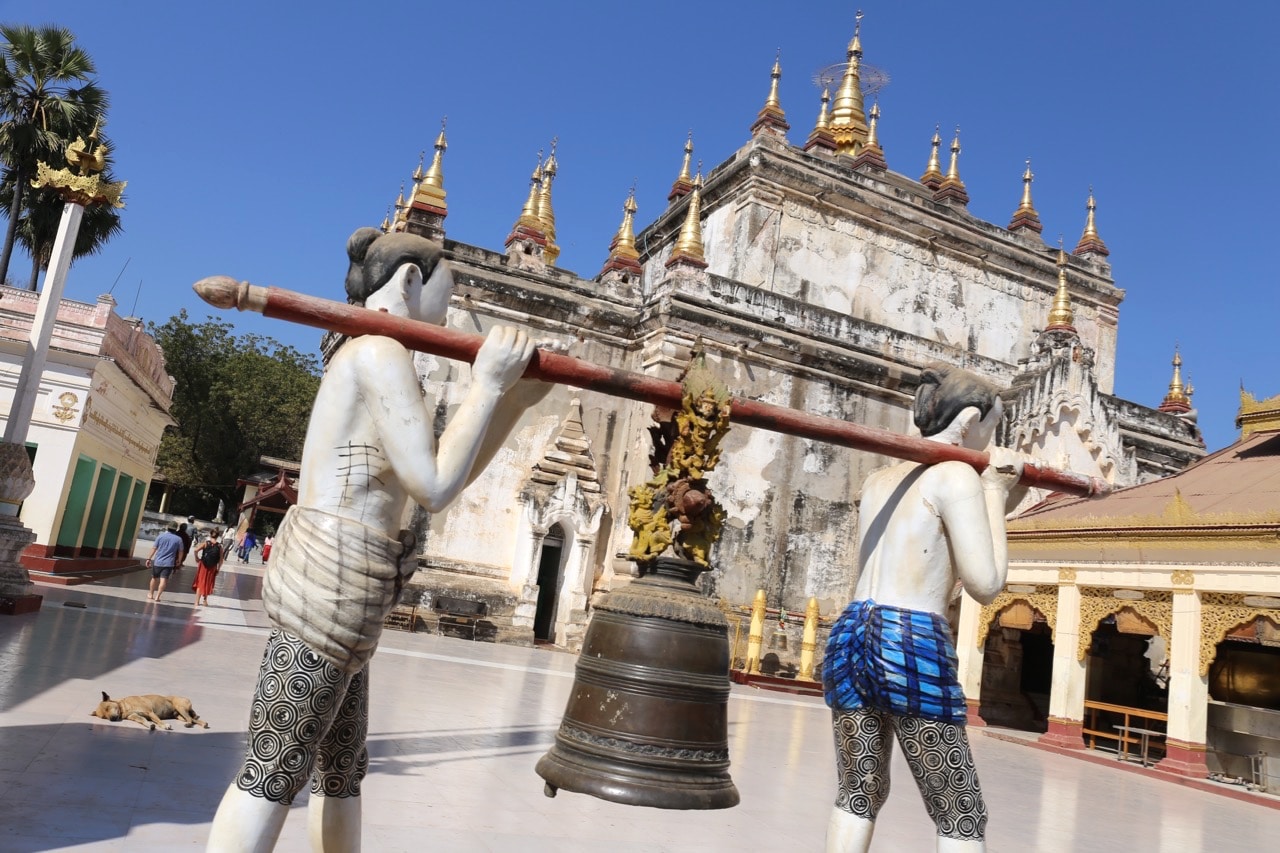 Manuha Temple was built by captive Mon King Manuha in 1067. It is a rectangular building of two storeys which contains three images of seated Buddhas and an image of Buddha entering Nirvana. 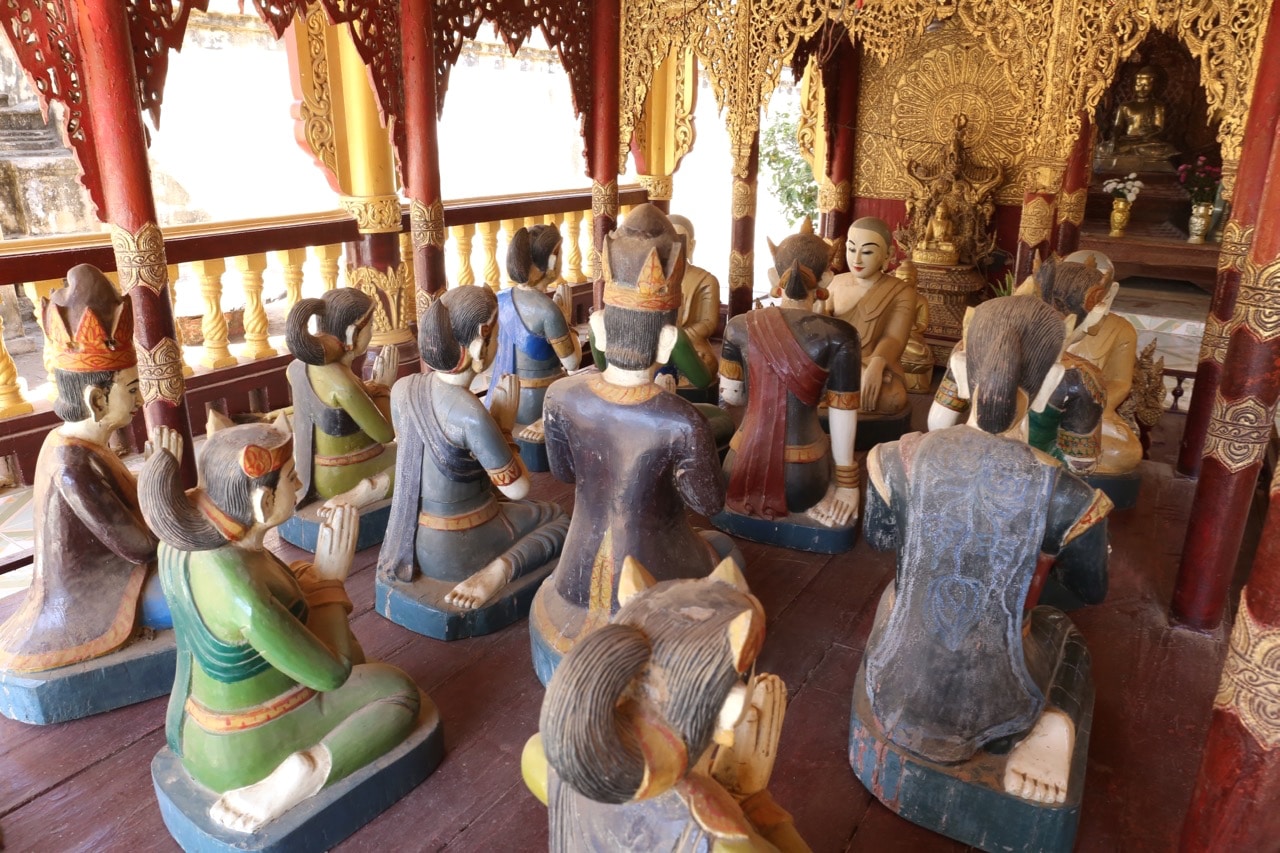 Gubyaukgi Temple was built in 1113 AD by Prince Yazakumar, shortly after the death of his father, King Kyansittha of the Bagan Dynasty. The temple is most notable as it contains a large array of well-preserved frescoes on its interior walls, the oldest original paintings to be found in Bagan. All of the frescoes are accompanied by ink captions written in Old Mon, providing one of the earliest examples of the language’s use in Myanmar. Be sure to pop by the wee shrines out back as there is a splendid painted wood carving featuring royals in communion with three monks. 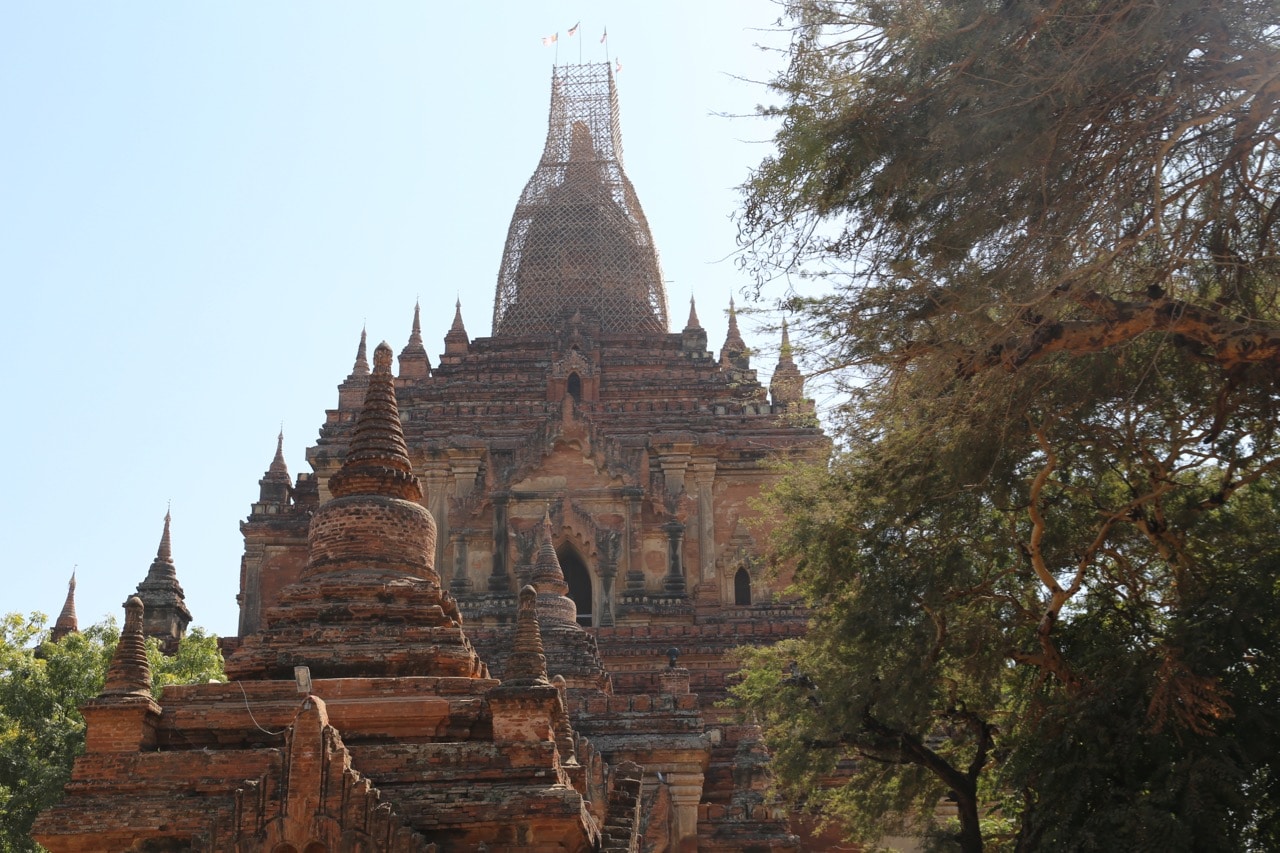 Htilominlo was built during the reign of King Htilominlo 1211-1231. The temple is three stories tall, with a height of 46 metres, and built with red brick. On the first floor of the temple, there are four Buddhas that face each direction. 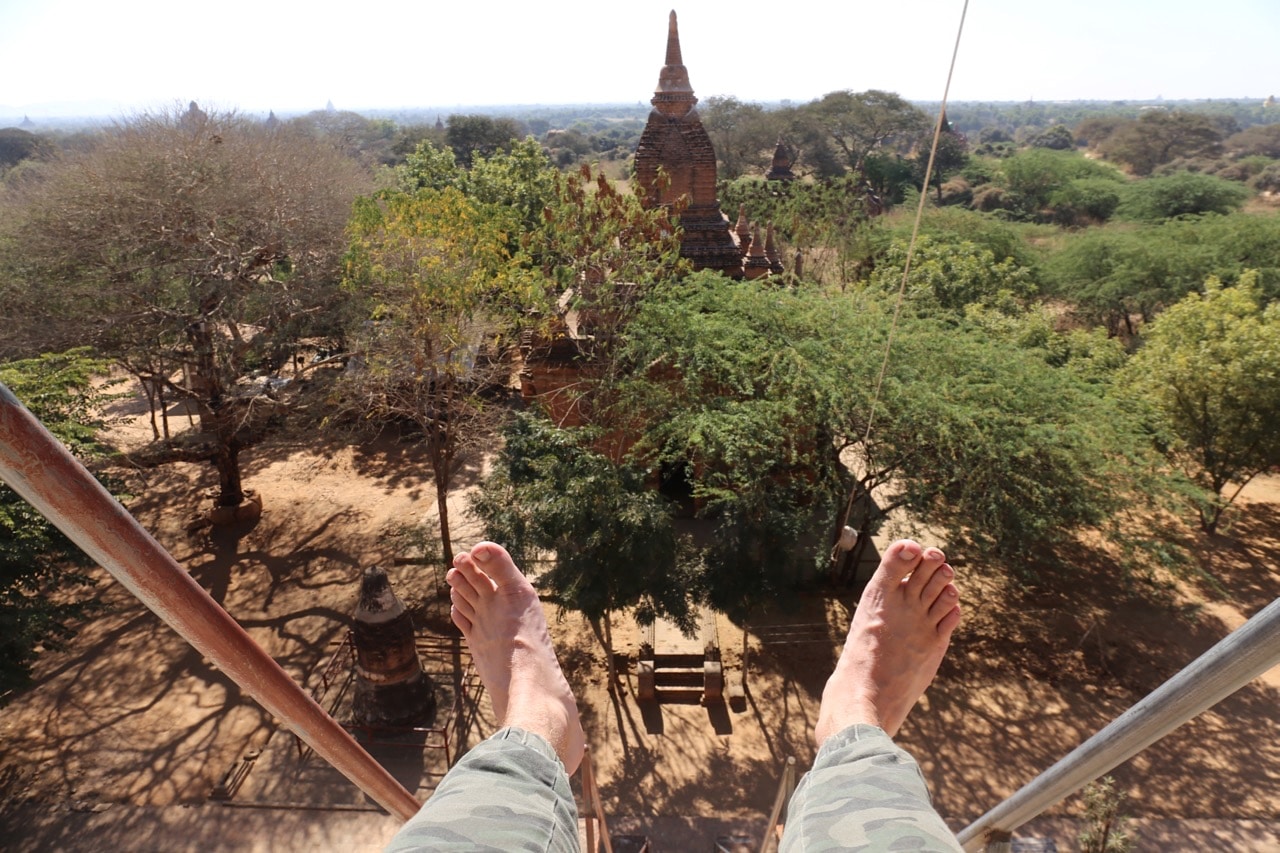 Shwe San Daw Pagoda contains a series of five terraces, topped with a cylindrical stupa, which has a bejewelled umbrella. The pagoda was built by King Anawrahta in 1057, and once contained terra cotta tiles depicting scenes from the Jataka. Enshrined within the pagoda are sacred hairs of Gautama Buddha, which were obtained from Thaton. It’s one of the most popular temples to climb, offering fabulous views over Old Bagan. 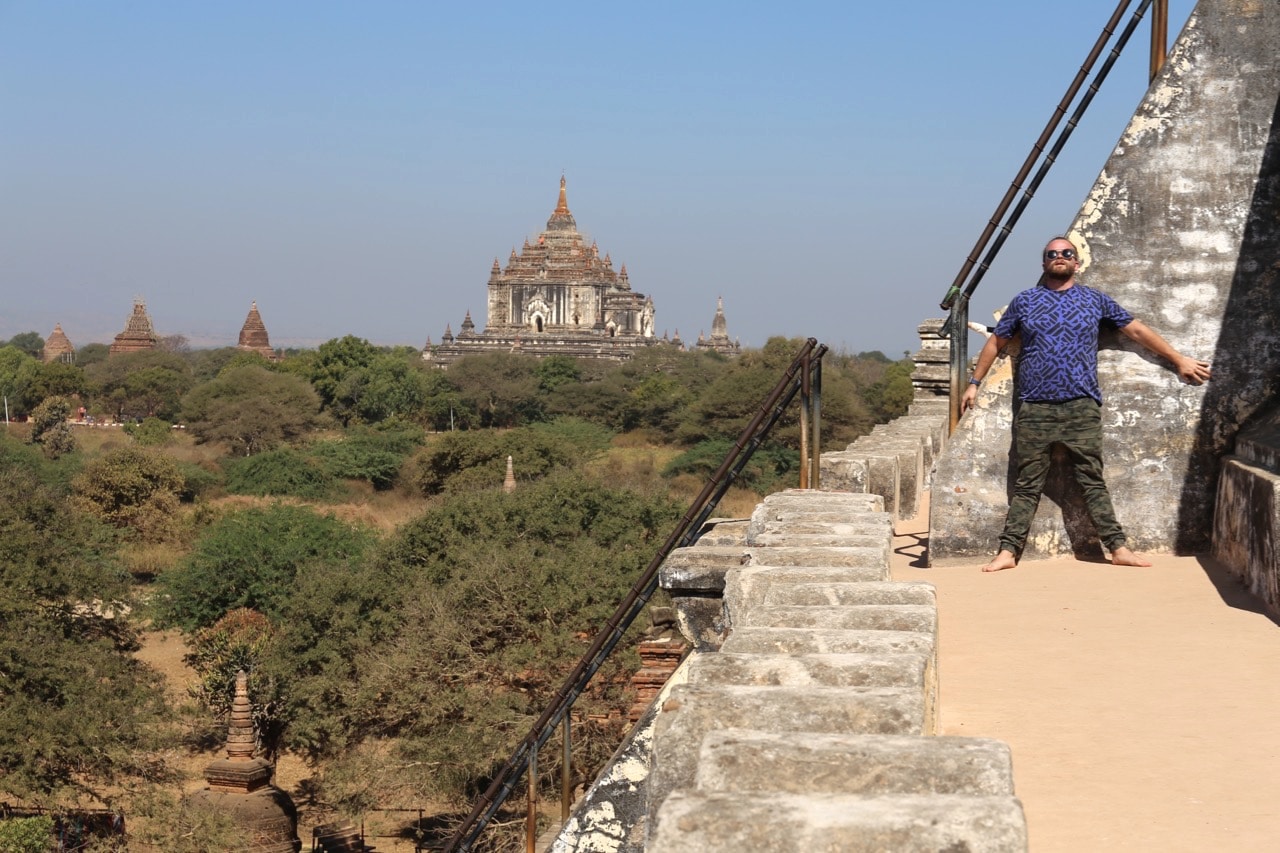 Thatbyinnyu Temple is one of Bagan’s most famous, built in the mid-12th century during the reign of King Alaungsithu. Visible from all over Bagan, Thatbyinnyu which means “omniscience,” is the tallest structure on the site, rising to a majestic 210 ft. It was the first to adopt the double-story hollow (gu) architectural style and features a seated Buddha located on the top floor. 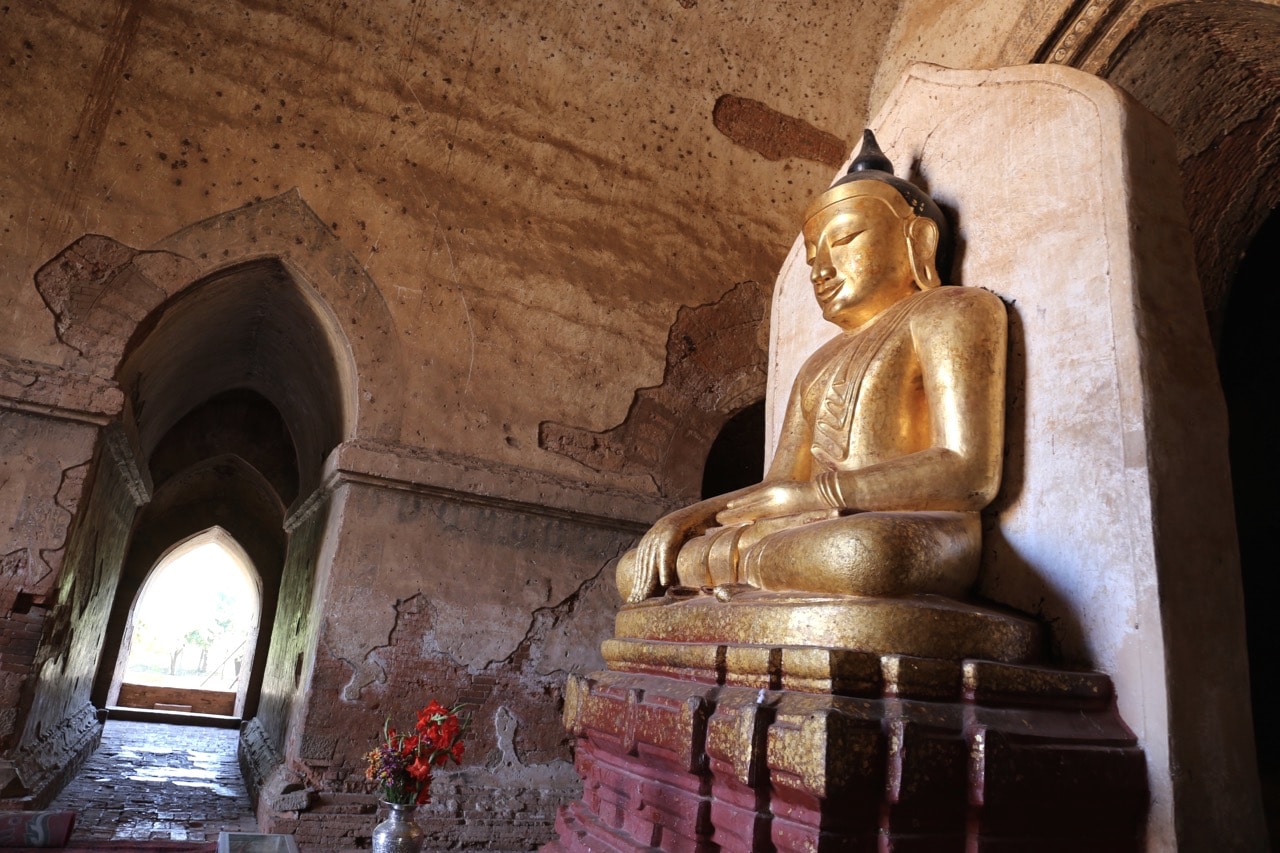 Dhammayangyi Temple is the largest of all the temples in Bagan, built during the reign of King Narathu. He came to the throne by assassinating his father Alaungsithu and his elder brother, and presumably built this largest temple to atone for his sins. The Dhammayangyi is the widest temple in Bagan, and is built in a plan similar to that of Ananda Temple. Burmese chronicles state that while the construction of the temple was in the process, the king was assassinated by some Indians and thus the temple was not completed. 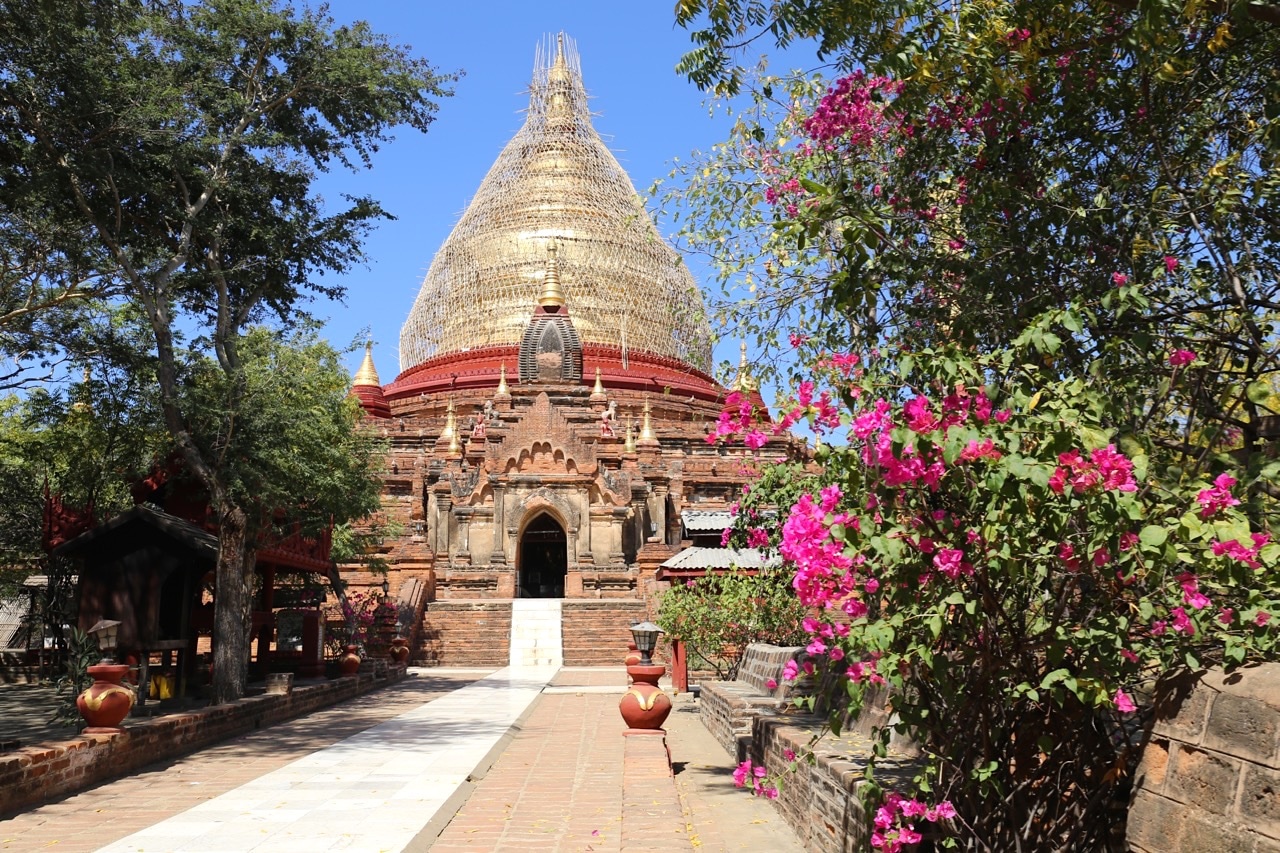 The Dhammayazika Pagoda is located in the village of Pwasaw. It was built in 1196 during the reign of King Narapatisithu. The pagoda is circular in design, and is made of brick. Its three terraces contain terra cotta tiles illustrating scenes from the Jataka. It’s a lovely spot to skip through in the afternoon as the lush gardens offer sweet smells and much needed shade from the bleating sun.