Last year Air Canada launched direct flights to Casablanca, offering jet-setting Canadians a short seven-hour journey from Montreal to the heart of North Africa. And with the host of companies offering extended travel and touring options, now seems like the perfect time to head over to Morocco.

For a travel writer like me who has spent the last decade whittling down my bucket list, Morocco was one of the few countries I was excited to explore. I fell in love with North Africa after enjoying a luxury cruise along Egypt’s Nile River, so was looking forward to experiencing Morocco’s culture, uniquely influenced by its ancient Berber traditions.

In preparation for my epic Moroccan road trip, I researched the destination months in advance using the newest edition of Eyewitness Travel Morocco (DK Publishing, 2017).

The informative guide includes detailed itineraries and “don’t miss” destination highlights at a glance, illustrated cutaway 3-D drawings of important sights, floor plans for major attractions such as mosques, kasbahs, and souks, area maps marked with popular sights, top hotel and restaurant listings, as well as a slew of info on niche interests such as mosque dress etiquette, best spots to shop for local arts and crafts, hiking and trekking, landscape and wildlife, and the flavours of Morocco so you’re up to speed on how to eat and drink like a local. 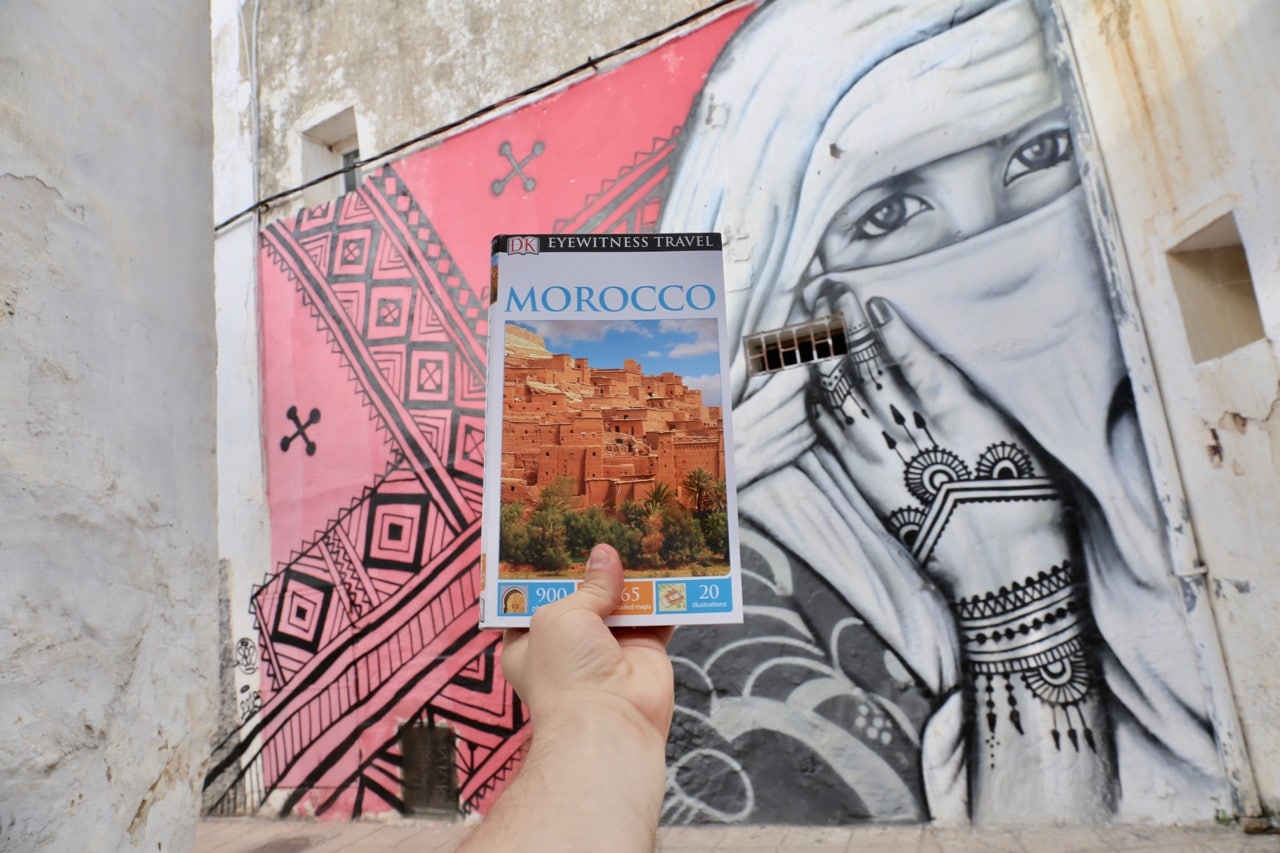 If you’re keen to see all that Morocco has to offer, it’s best to organize a private tour as rural roads here can be wild and parking in many of the country’s ancient villages can easily cause a stress-attack. Sahara Experience is a local tour operator that specializes in organizing bespoke luxury retreats in Morocco. We were picked up at the Four Seasons Hotel Casablanca by a friendly, English-speaking guide who was happy to edit our itinerary along the way based on places that had come recommended to us in our DK Eyewitness Travel Morocco.

Things To Do On a Road Trip of Morocco 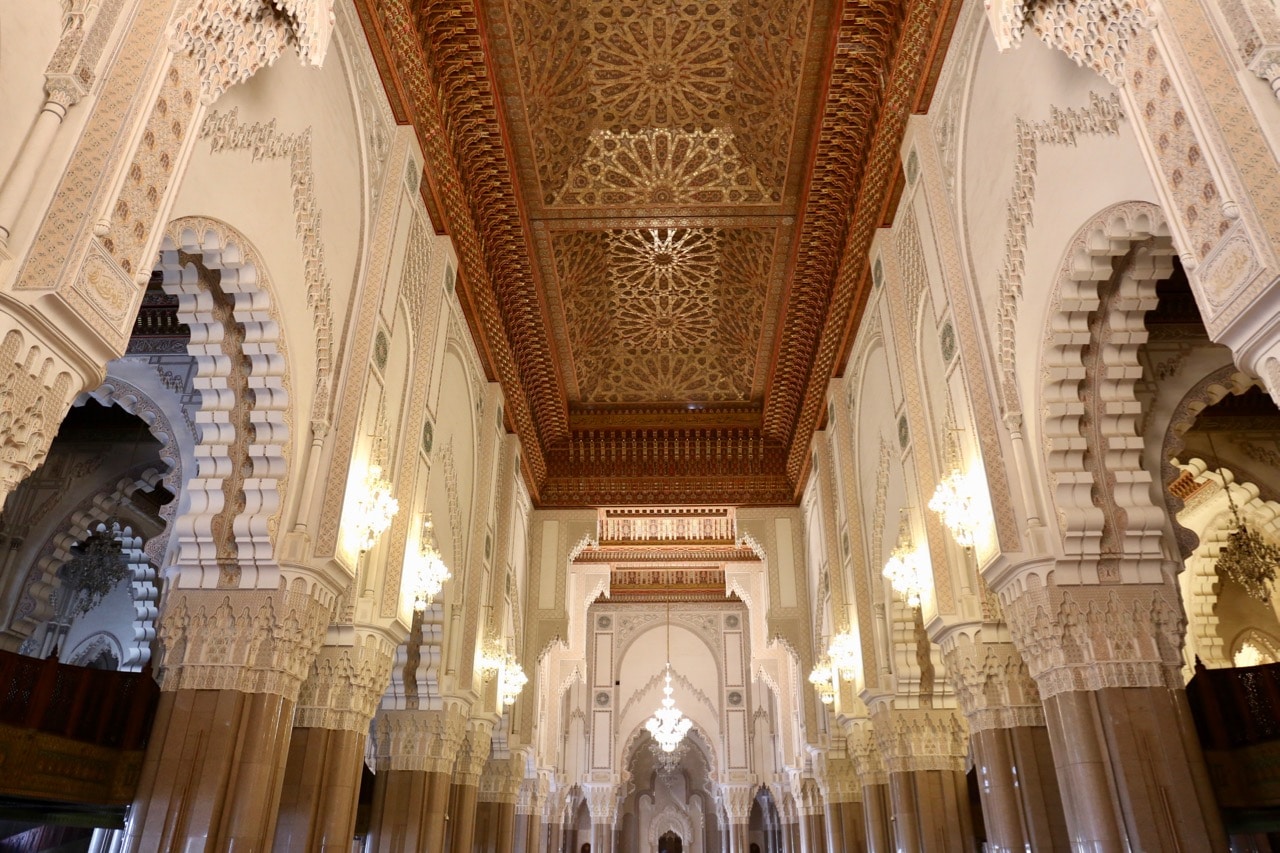 Casablanca’s inescapable signature landmark is the epic Hassan II Mosque. Everything about the Mosque is grand, from its 650-feet-high, green-tiled minaret to the prayer hall that can squeeze in 25,000 worshippers. It is one of only two mosques in Morocco that non-Muslims can enter so long as they are dressed appropriately (long pants or dresses; no exposed shoulders). That means visitors are free to marvel at the marble fountains, wood carvings, and tilework that make the mosque a masterwork of Moroccan artistry. 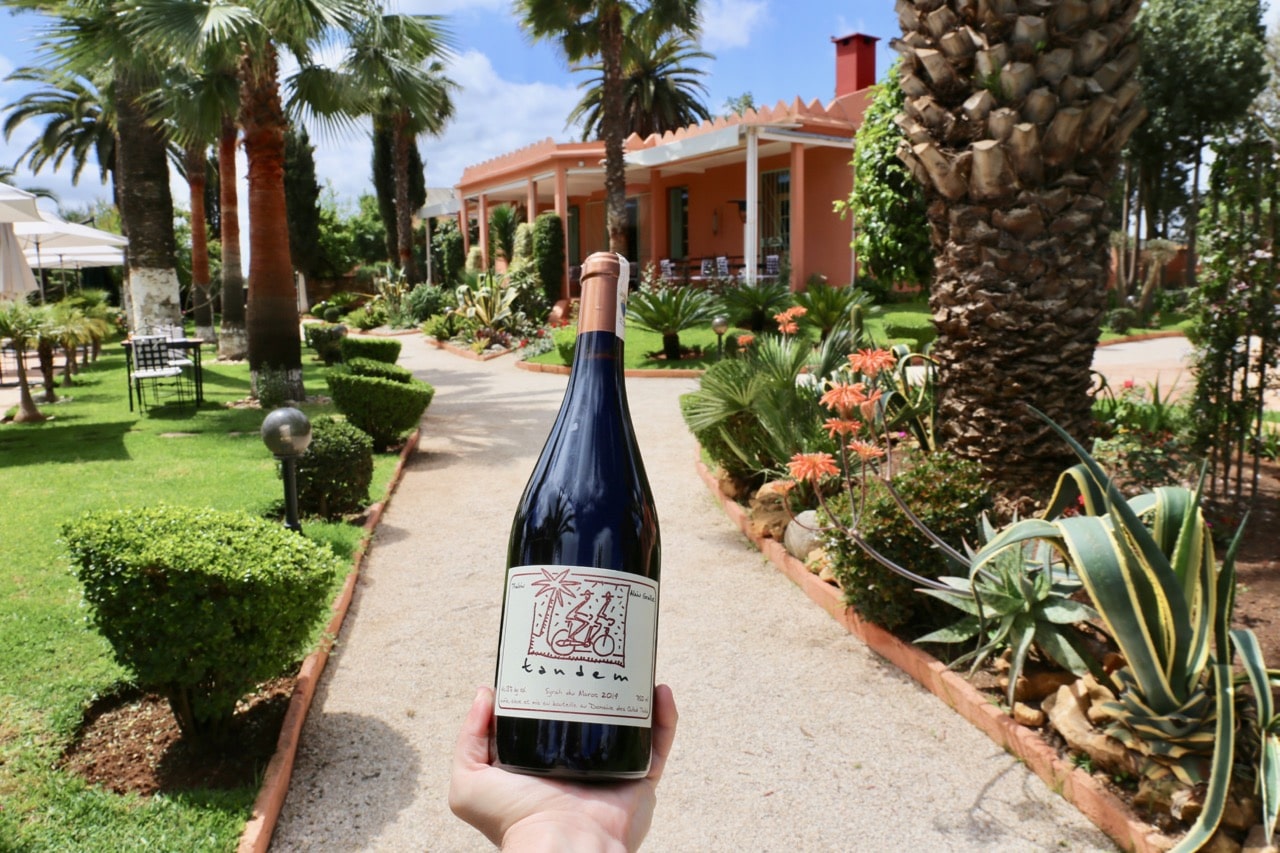 Wine has been produced in Morocco since Roman times, and local wine production was encouraged during the Protectorate. The most popular wines include red and white Medallion and red, white and rosé Siroua. If you’re driving from Casablanca to Rabat, take a quick detour to enjoy a wine-sloshed lunch at Le Ryad des Vignes, which is situated in a gorgeous tropical garden. 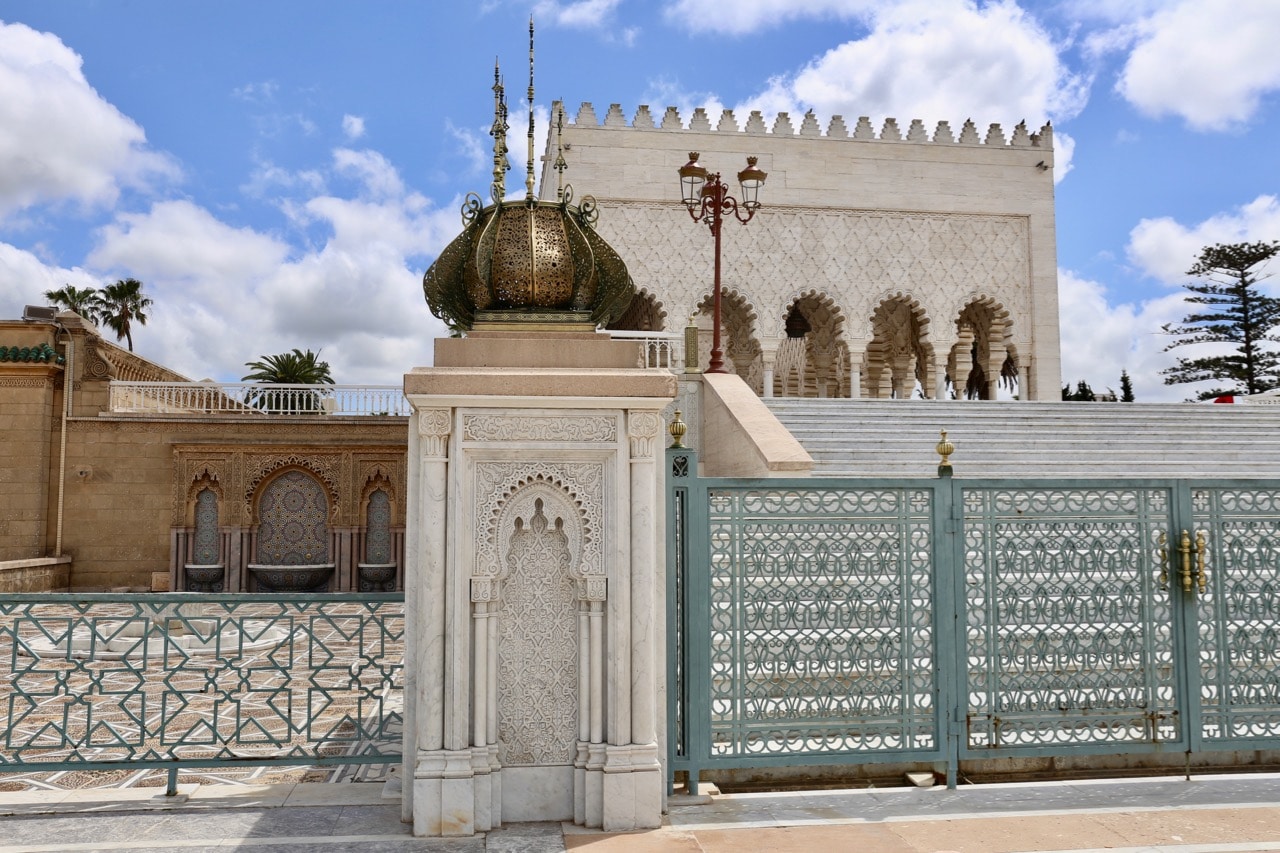 Raised in memory of Mohammed V, the father of Moroccan independence, Rabat’s most visited attraction was commissioned by his son Hassan II. It was designed by Vietnamese architect Vo Toan and built with the help of 400 Moroccan craftsmen.

The group of buildings that make up the Mausoleum of Mohammed V include a mosque and a museum devoted to the history of the Alaouite dynasty. The mausoleum itself, in white Italian marble, stands on a platform, with entry provided by decorative wrought-iron doors that open onto a stairway leading to a jaw-dropping dome. Take some time do wander around the space and you’ll find royal guards in traditional attire as well as the landmark Hassan Tower, which you can reach by weaving your way through ancient columns. 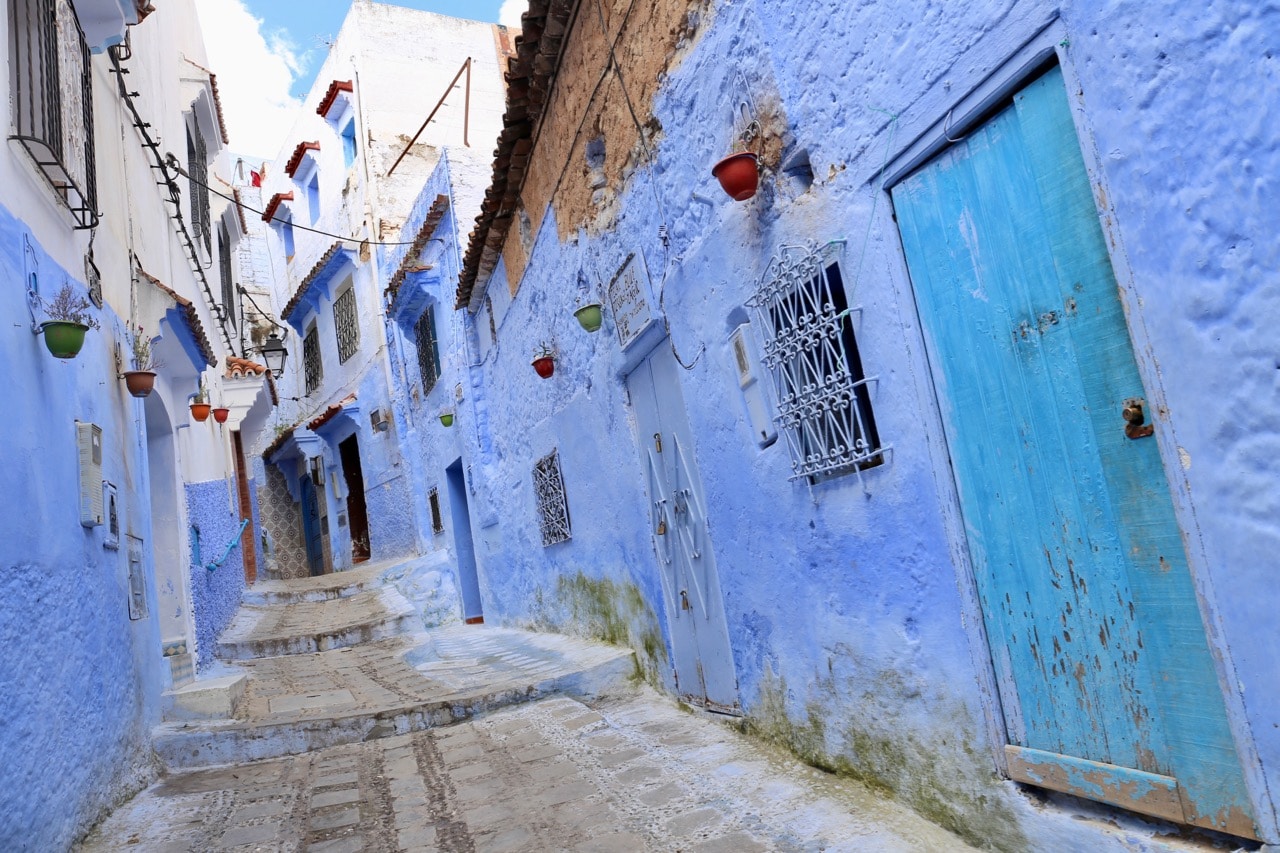 The white-and-blue-coloured town of Chefchaouen is a photographer’s dream. Steep narrow streets with white-and-indigo limewashed buildings, petite squares, frothing fountains, and houses with ornately decorated doorways and red tile roofs make it one of Morocco’s most photographed destinations.

Strap on your sturdy walking shoes as to properly explore Chefchaouen you’ll need to hike up endless staircases. The town has an artsy Santorini vibe with friendly locals selling crafts such as handmade soap, multi-coloured rugs, and brilliant brass lamps. The hub of all the activity can be found in the town’s central square where buskers entertain hungry tourists who sit in the sun on pretty patios while devouring tasty tagine. Be sure to enjoy a stroll through the casbah (castle) and you’ll find a quiet garden dotted with lush orange trees and fragrant rosemary plants. Take the winding stairs to the top floor and catch your breath while indulging in a fantastic 360-degree view. 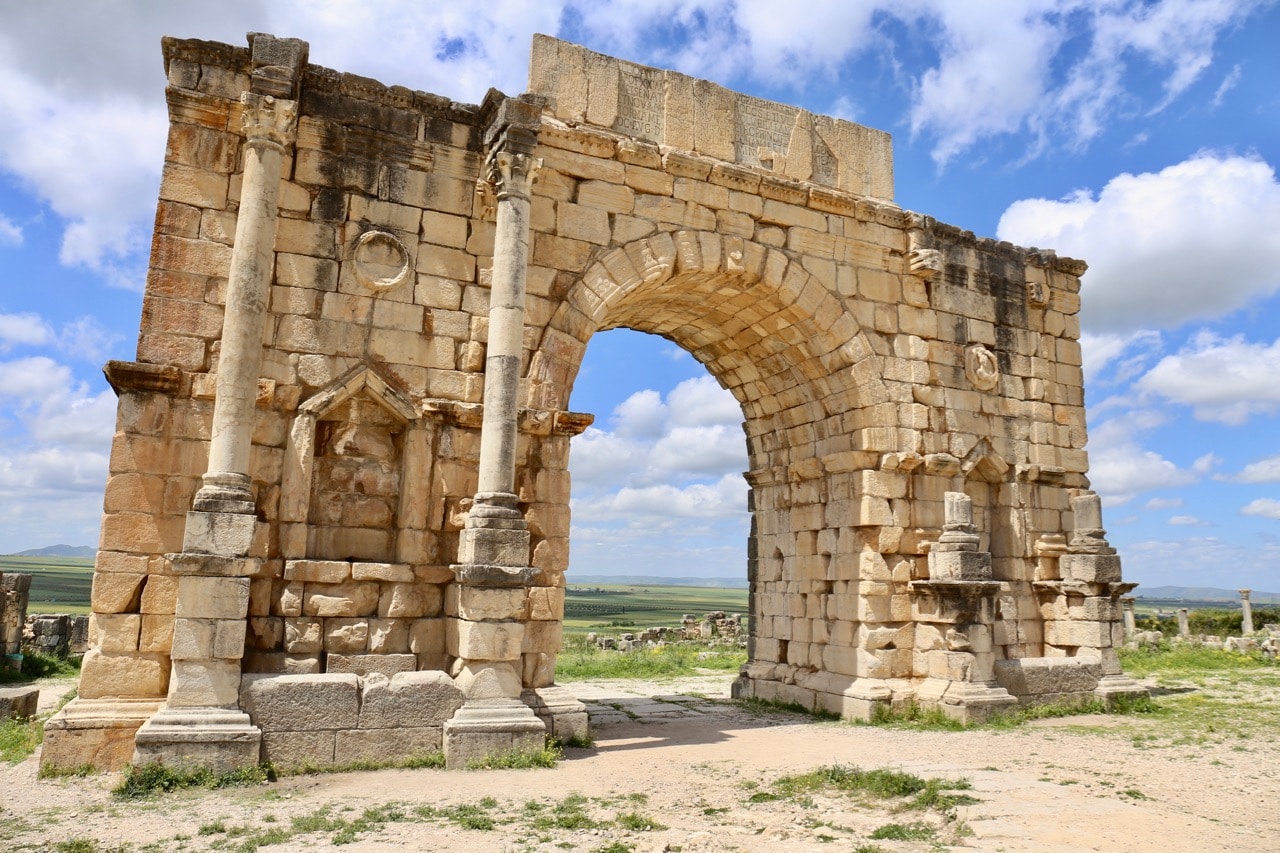 Volubilis is a partly excavated Roman city situated near Meknès. Built in a fertile agricultural area, it developed from the 3rd century BC onward as a Berber and Phoenician-Carthaginian settlement. It grew rapidly under Roman rule from the 1st century AD onward to the end of 3rd century, and expanded to cover about 100 acres. Its prosperity, which was derived principally from olive growing, prompted the construction of many town-houses featuring large mosaic floors. Today tourists tiptoe across rocky paths to gawk at the sheer size of the place with not-to-be-missed highlights including a crumbling Basilica, impressive Triumphal Arch, and several multi-coloured mosaics featuring tigers, fishermen, and Venus bathing nude attended by nymphs. 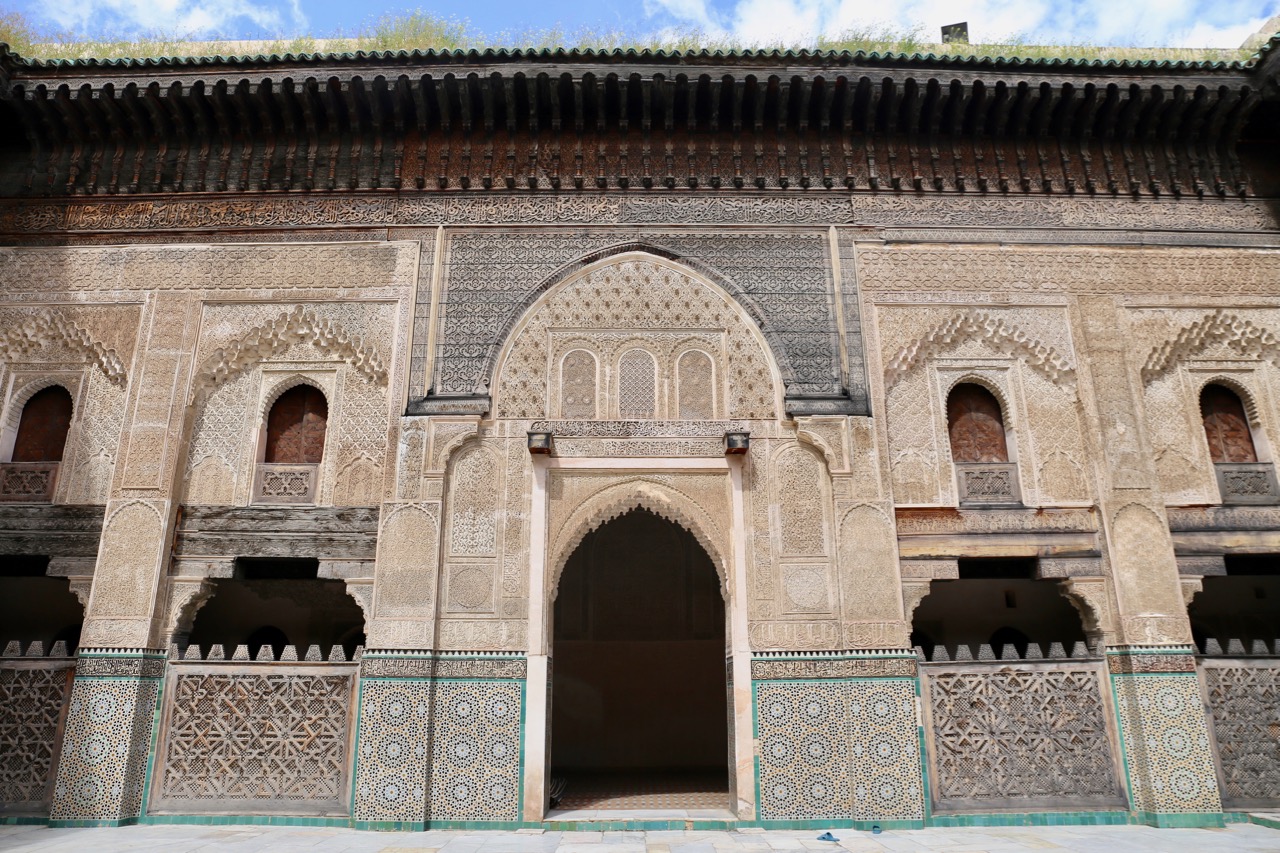 The medina in Fès is one of the best-preserved, ancient walled cities in North Africa. The architectural highlight here is Bou Inania Medersa, the largest and most sumptuously decorated medersa ever built by the Merinids. Constructed between 1350 and 1355 by the sultan Abou Inan, it is the only medersa in Morocco that is outfitted with a pulpit and a minaret and functions as a mosque, cathedral, students’ residence, and school. The one-storey building is arranged around a square Moorish courtyard built with fine marble and onyx. Be sure to take the time to stroll along the covered shopping arcade at the medersa’s entrance. You’ll find stalls teaming with nuts, dried fruit, and olives. 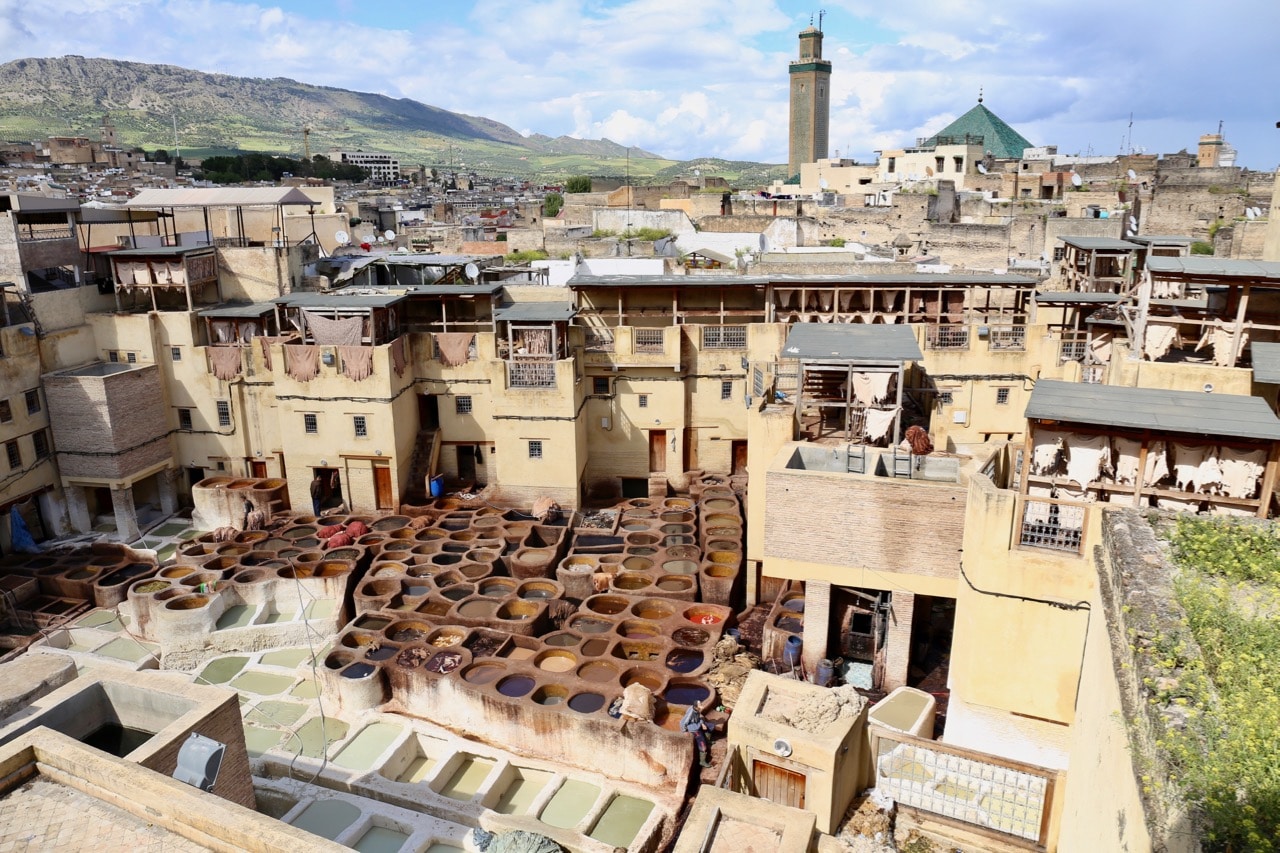 The Chouara, or Tanners’ Quarter, has been located in Fès since the Middle Ages. Its dyeing vats, located in the midst of houses, are best seen from neighbouring terraces. Although the smells that waft around here can cause eyes to cross, this is the most lively and picturesque of all the souks in Fès. Before you take the winding staircase to the roof it is customary for your guide to provide you with a sprig of mint, which you can smell if the stench becomes overwhelming. On your walk back down you’ll be given a tour through extensive leather galleries filled with handcrafted shoes, purses, bags, and belts.

One of the best spots for animal lovers to get up close and personal with wildlife in Morocco is Cèdre Gouraud Forest, located just south of Fès. The spectacular woodland area was named for the French general Henri Gouraud and can be found on National Route 8 between Azrou and Ifrane. The serene cedar forest is a popular stop for visitors keen to watch Barbary macaques swing from the branches above. 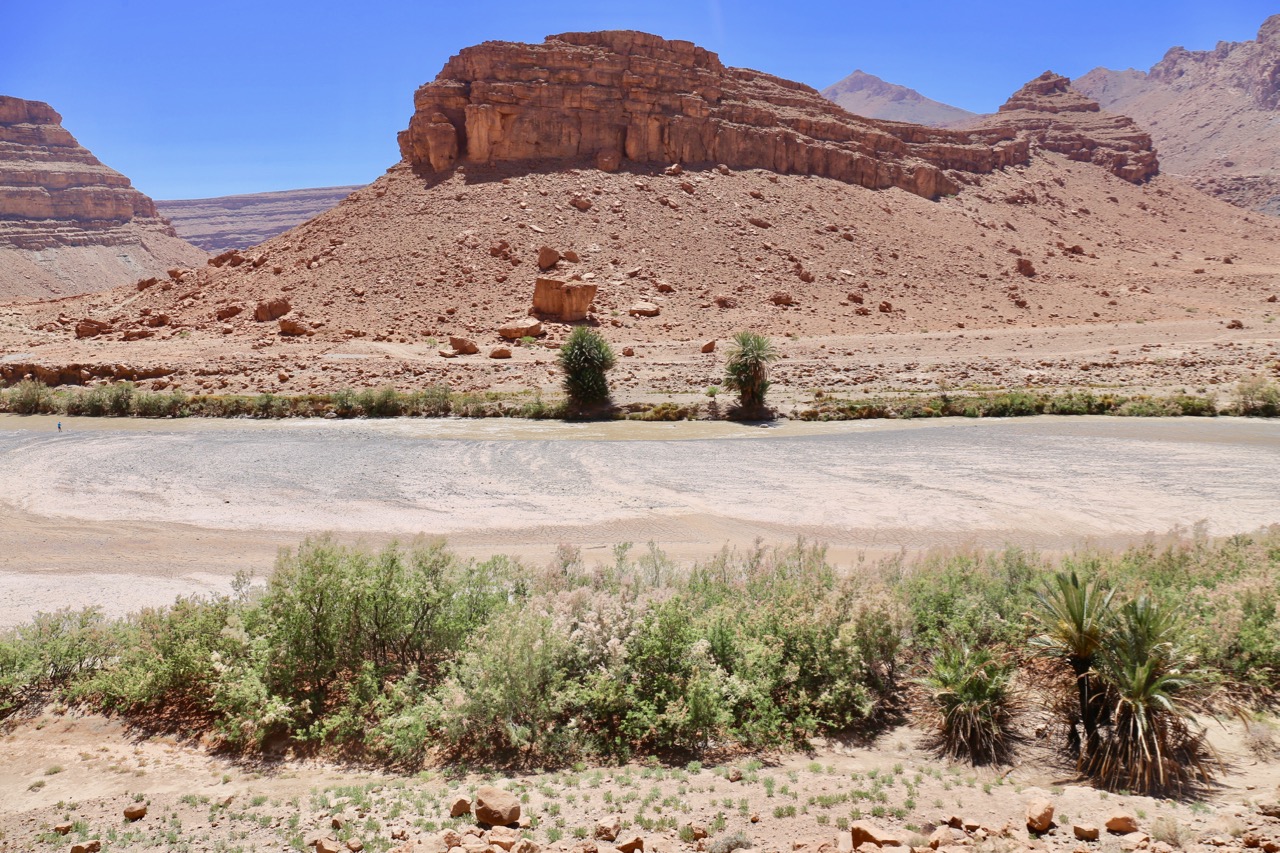 The Road to Erfoud

Morocco’s most scenic drive is The Road to Erfoud, an eight-hour drive which begins in Fès and finishes a stone’s throw from the famous dunes of Merzouga. While the drive is certainly exhausting, it’s also visually stunning as you zip across the Atlas Mountains. Your driver will do all the work here, so just sit back, relax, and nibble on snacks as you zig-zag along snake-like roads that hug dramatic mountains reminiscent of Arizona’s Grand Canyon. As you climb to the highest elevation you’ll spot snow-capped mountains, farmers herding hundreds of sheep, and camps of nomads’ tents. 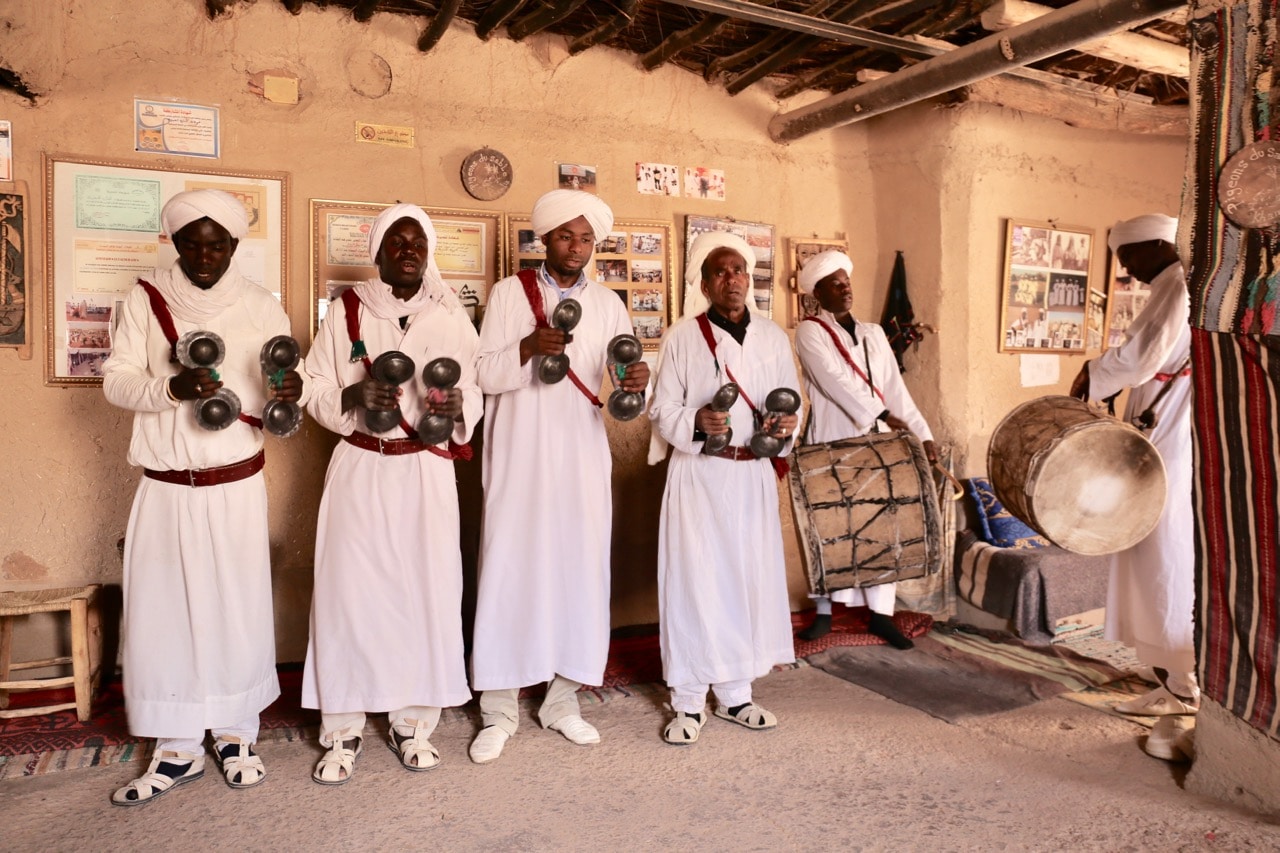 A popular stop on the road to Merzouga, Morocco’s jumping off point for overnight stays in the Sahara Desert, is the small town of Khemliya. The town is made up of 400 Gnaoua and Berber, who are famous for their song and dance performances. The Gnaoua are originally from Sudan and arrived generations ago to Morocco in desert caravans. Today their principle income comes from performing lively traditional folk shows, which are accompanied by glasses of hot mint tea. 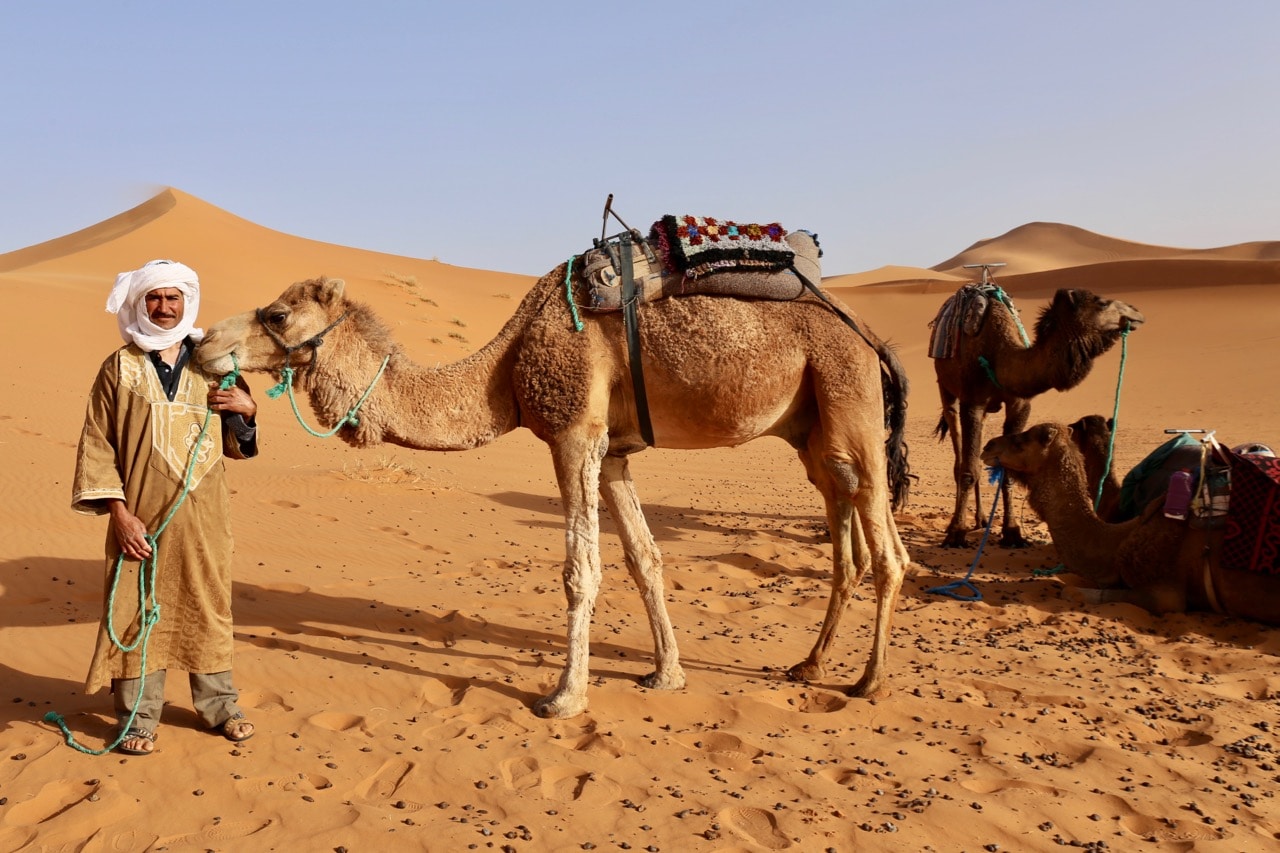 There are scores of tour companies that operate tented camps in the Sahara Desert just outside of Merzouga. Overnight guests are typically dropped off at 5 p.m. and greeted by a Berber guide and caravan of camels. The trek takes about an hour and offers a fun introduction to the Sahara’s epic sand dune scenery. 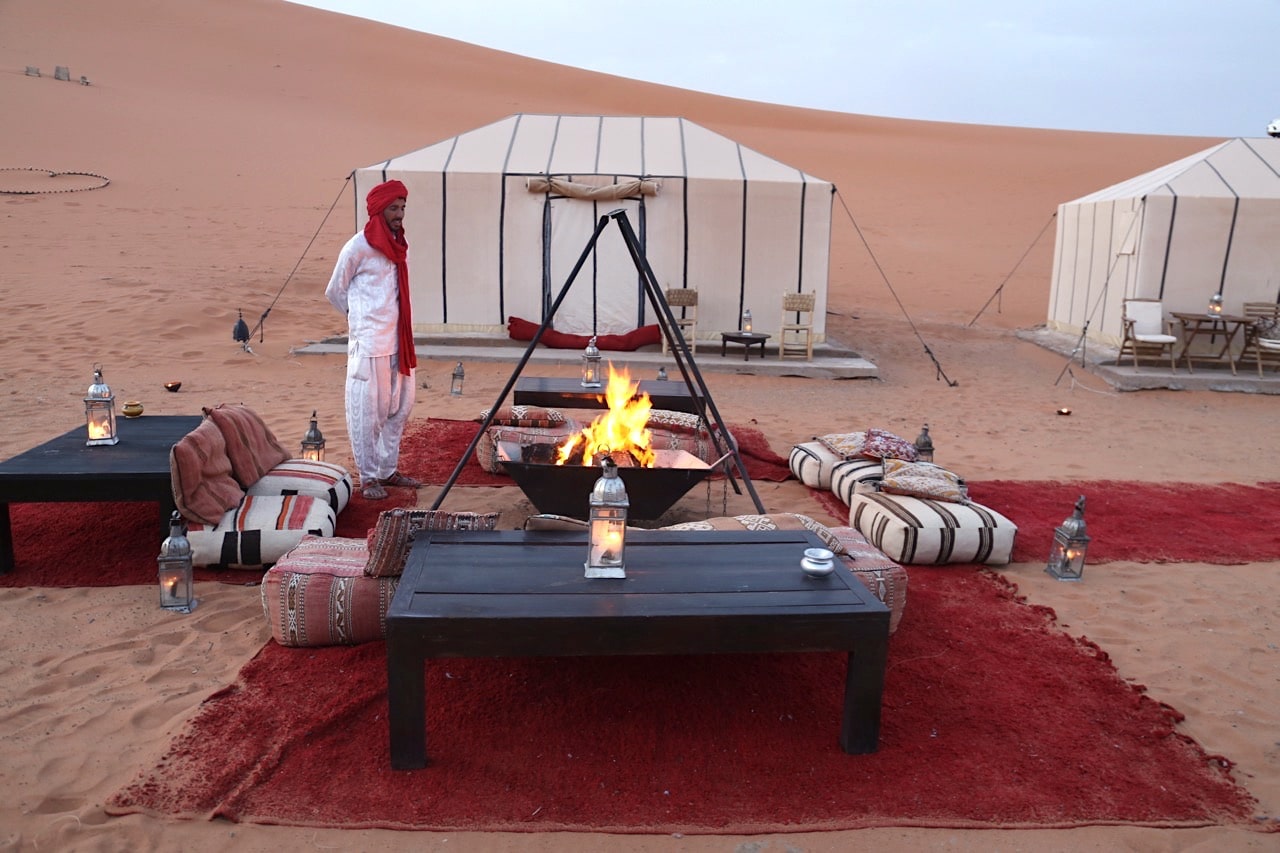 Once off the camels, guests climb up a wind-swept sand dune to get a tantalizing first glimpse of the Merzouga Luxury Desert Camp below. The camp features five private accommodations (outfitted with a comfy king bed and a bathroom separated by a curtain), a tented dining area where breakfasts and dinners are served, and a central fire pit surrounded by an abundance of plush pillows…an ideal spot to sit back and enjoy star-gazing at night. 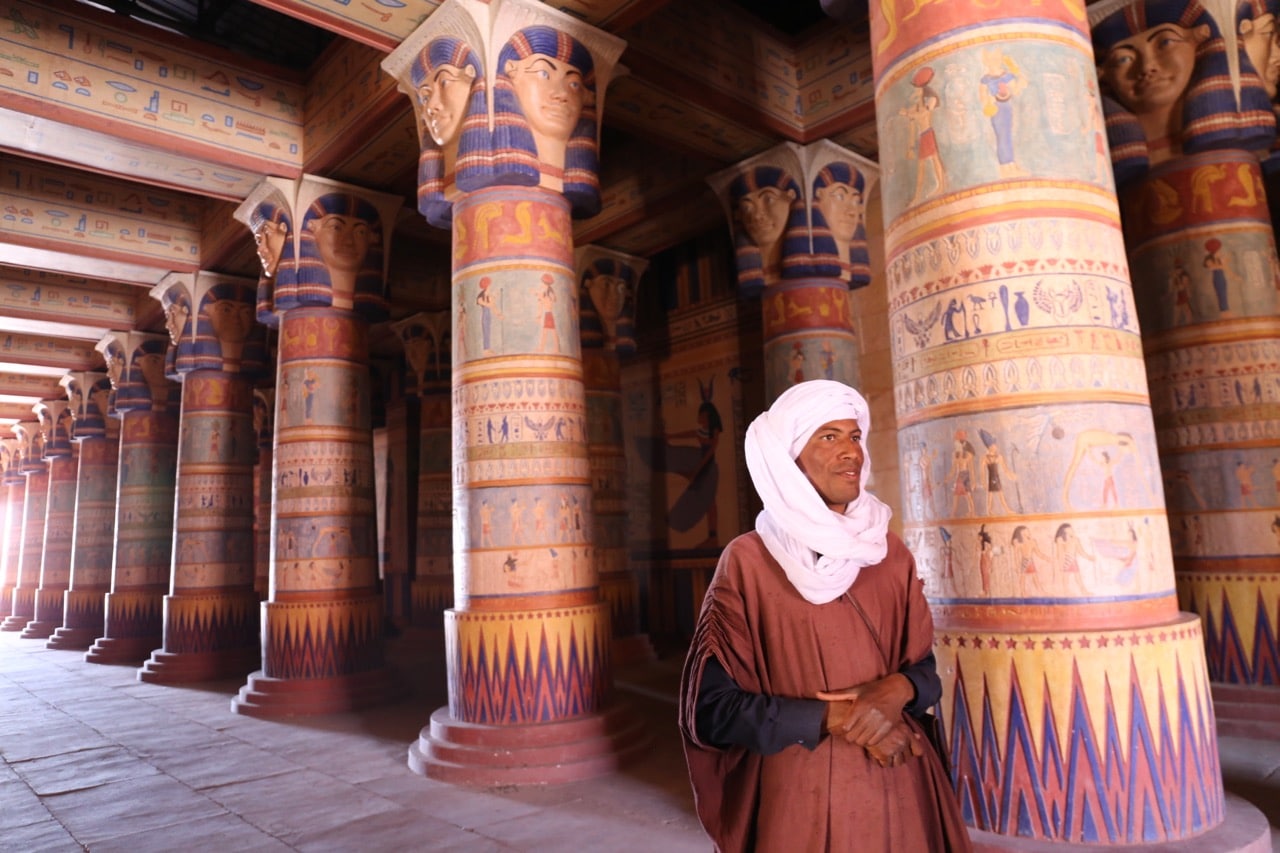 Located a short drive outside of Ouarzazate, a tour of Atlas Film Studios is a must-do for movie buffs. The 30,000-square-metre studio was originally built in the 1980s, and to this day it is one of the most famous film studios in the world, typically chosen by directors who are scouting for epic period films. Visitors are taken on a one-hour tour with a knowledgeable guide through each of the studio’s lavish sets. Hundreds of films have been shot here including Gladiator, The Mummy, Prince of Persia, Game of Thrones, Babel, Hercules, and Kundun. 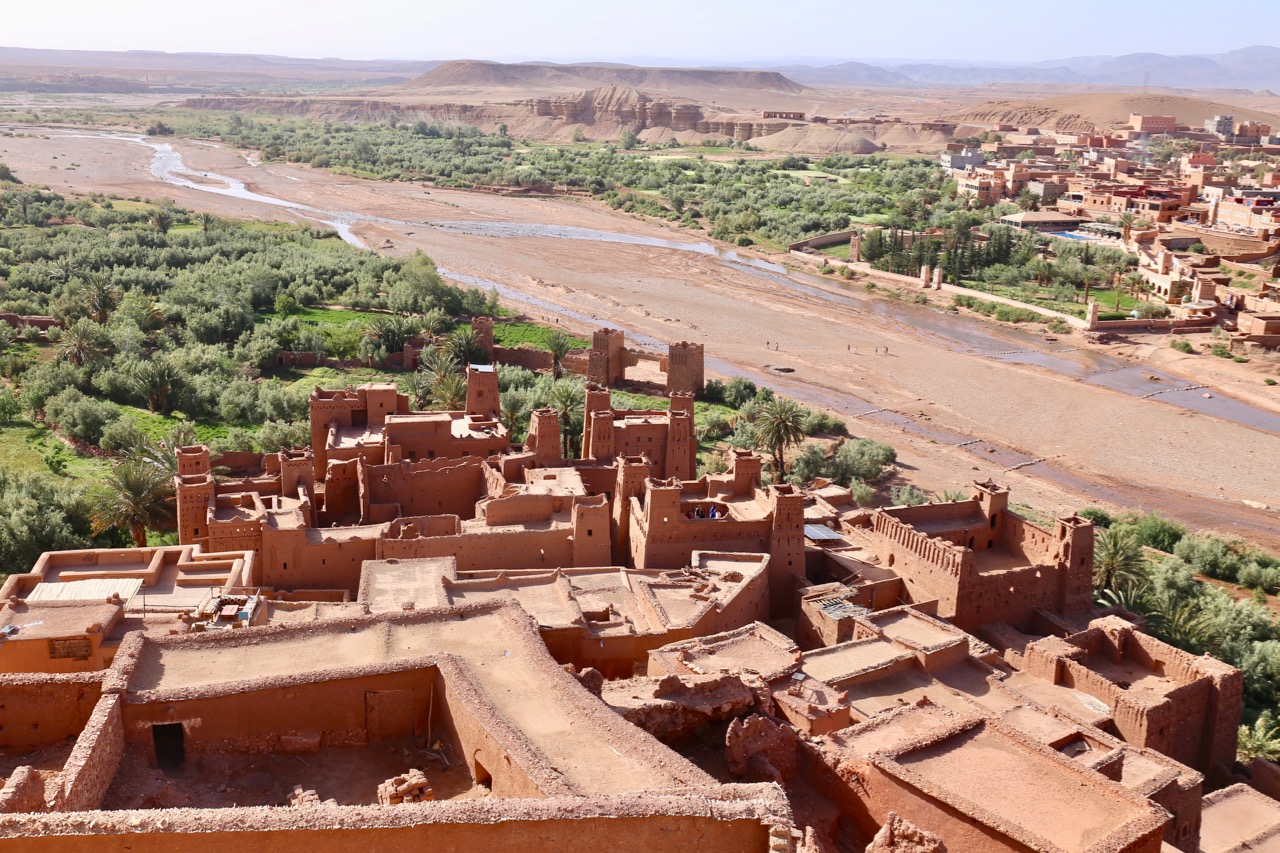 Backing onto a pinkish sandstone hill, the UNESCO heritage site Aït Benhaddou stands magnificently on the left bank of Wadi Mellah. The picturesque village, which has often been used as a film location, contains an impressive group of ochre pise kasbahs. You can easily explore Aït Benhaddou on your own. From the bridge, the gentle hike takes just 40 minutes, and once at the top the 360-degree views are guaranteed to take your breath away. 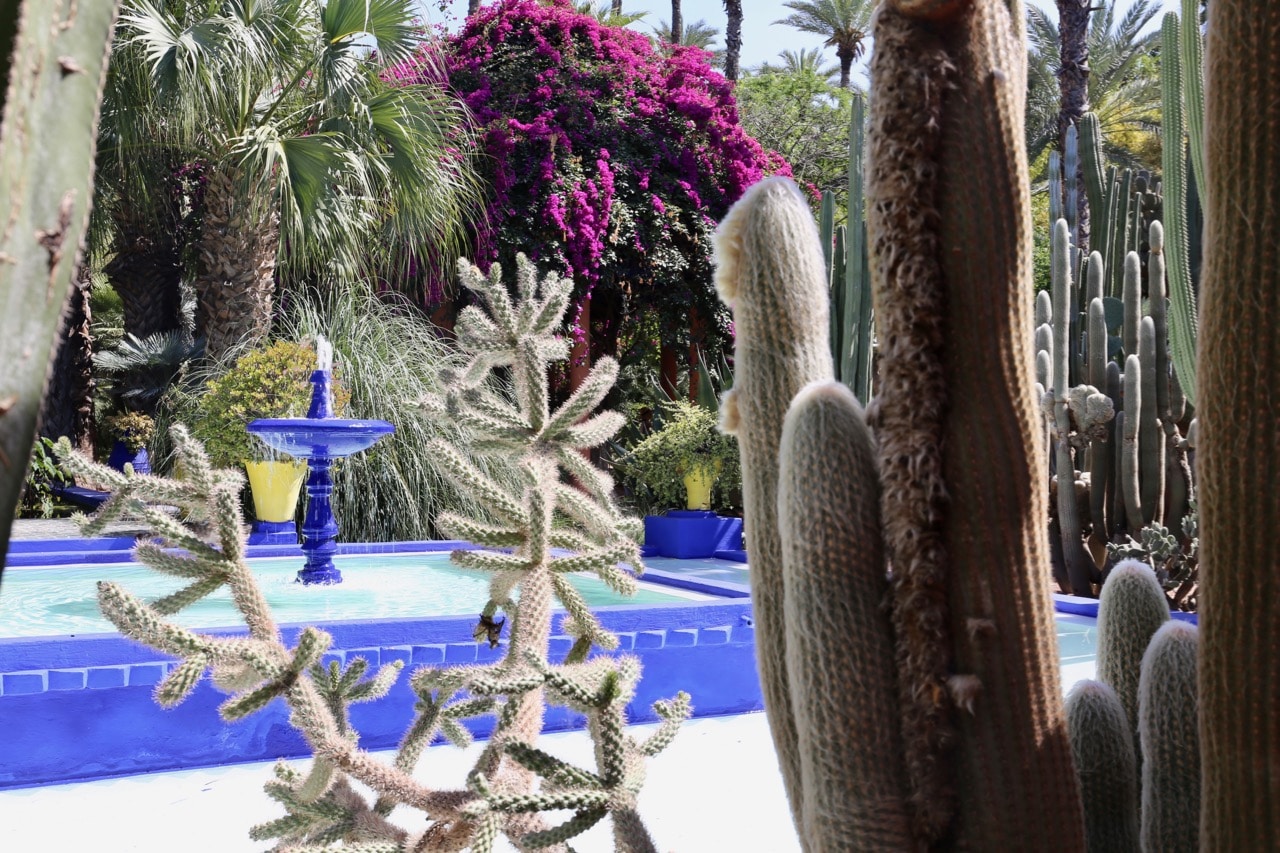 Majorelle Garden and its neighbouring Yves Saint Laurent Museum are the most visited attractions in Marrakech. Guests can purchase the duo as a combined ticket, starting at the recently opened YSL Museum, a design-tastic homage to the famous French fashion icon. The petite museum offers an exhibit that showcases a timeline of the designer’s work as well as a gallery featuring a parade of mannequins outfitted in eye-popping couture. The museum also features an intimate theatre, gift shop, and small cafe. Take a short stroll down the street and you’ll find hordes of horticulture fans lined up at Majorelle Garden. The now-iconic blue house located inside the lush gardens was bought by Yves Saint Laurent and his partner Pierre Berge. Besides yucca, bougainvillea, bamboo, laurel, geraniums, hibiscus, and cypresses, the garden has over 400 varieties of palm tree and 1,800 varieties of cactus. 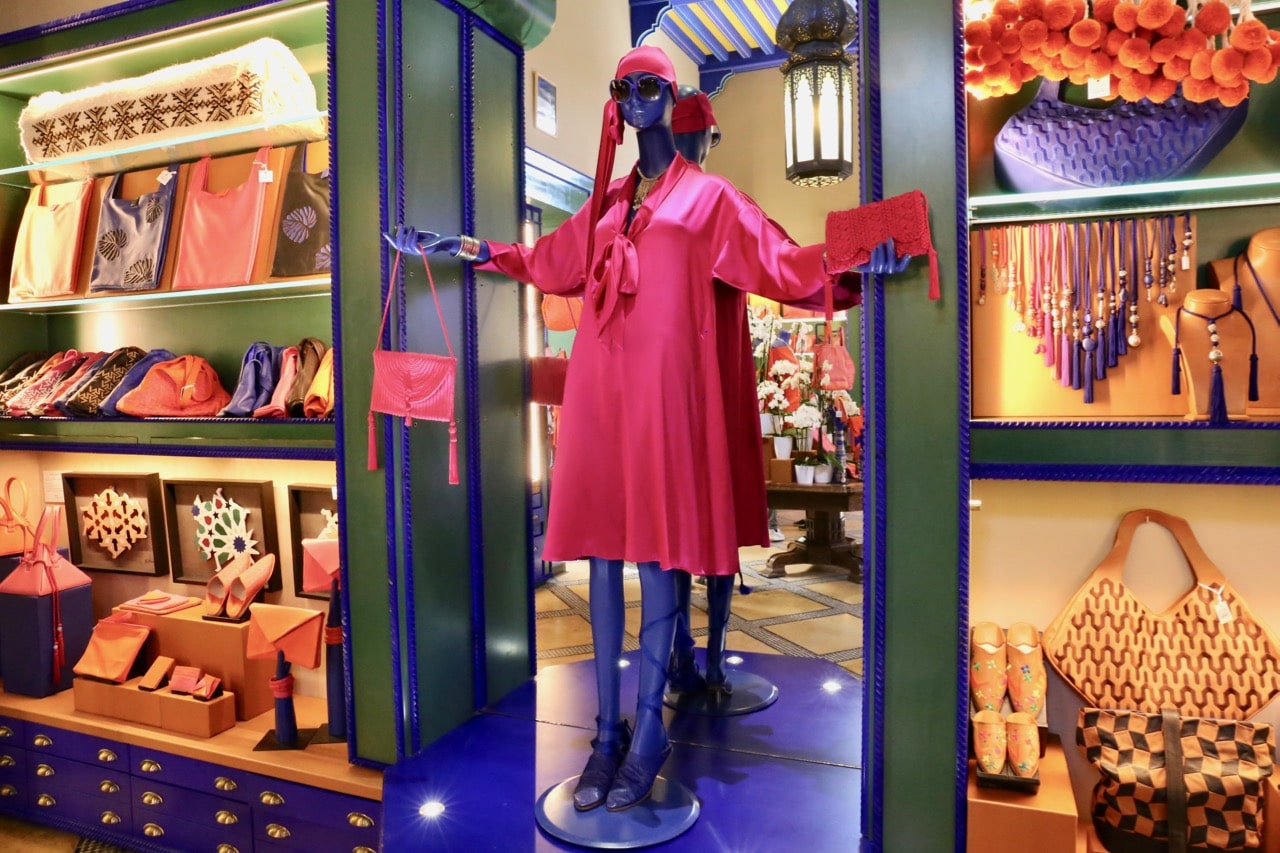