Many of Bali’s distinctive tastes and cooking styles were influenced by early Chinese, Indian, Arabic and Dutch traders and settlers. Flavoursome curries rely on freshly ground spices, and common seasonings include ginger, lemongrass, kaffir lime leaves and tamarind. Sauces feature coconut milk and the essential trio of cilantro, pepper and garlic. A paste of salted and fermented shrimp is also used to enliven and add depth to dishes. Hot fresh chilli appears in fiery accompanying sauces called sambals, and peanuts are typically present as a garnish, or ground into a paste to form a sweet and spicy sauce.

15 Must Try Tastes in Bali 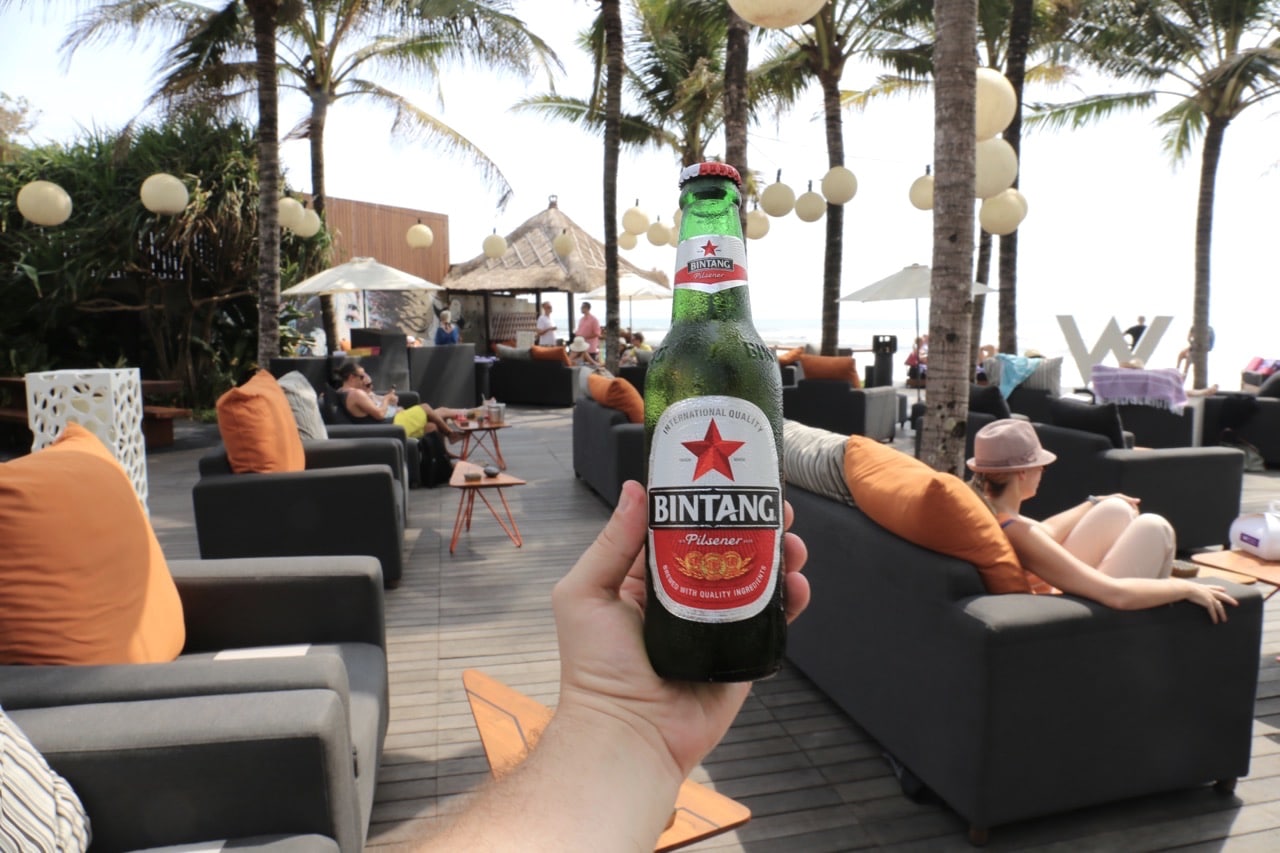 Bintang is the island’s iconic beer, a refreshing lager produced locally by Heineken. The beer is styled as an American Pale Lager, gold in colour, a little hoppy and absolutely refreshing on a hot day spent lounging on the beach. It pairs perfectly with Bali’s flavourful and spicy foods and at $1 a pop at the local grocery store (or $3 at most hotel bars) it’s a beverage you’ll soon find yourself familiar. 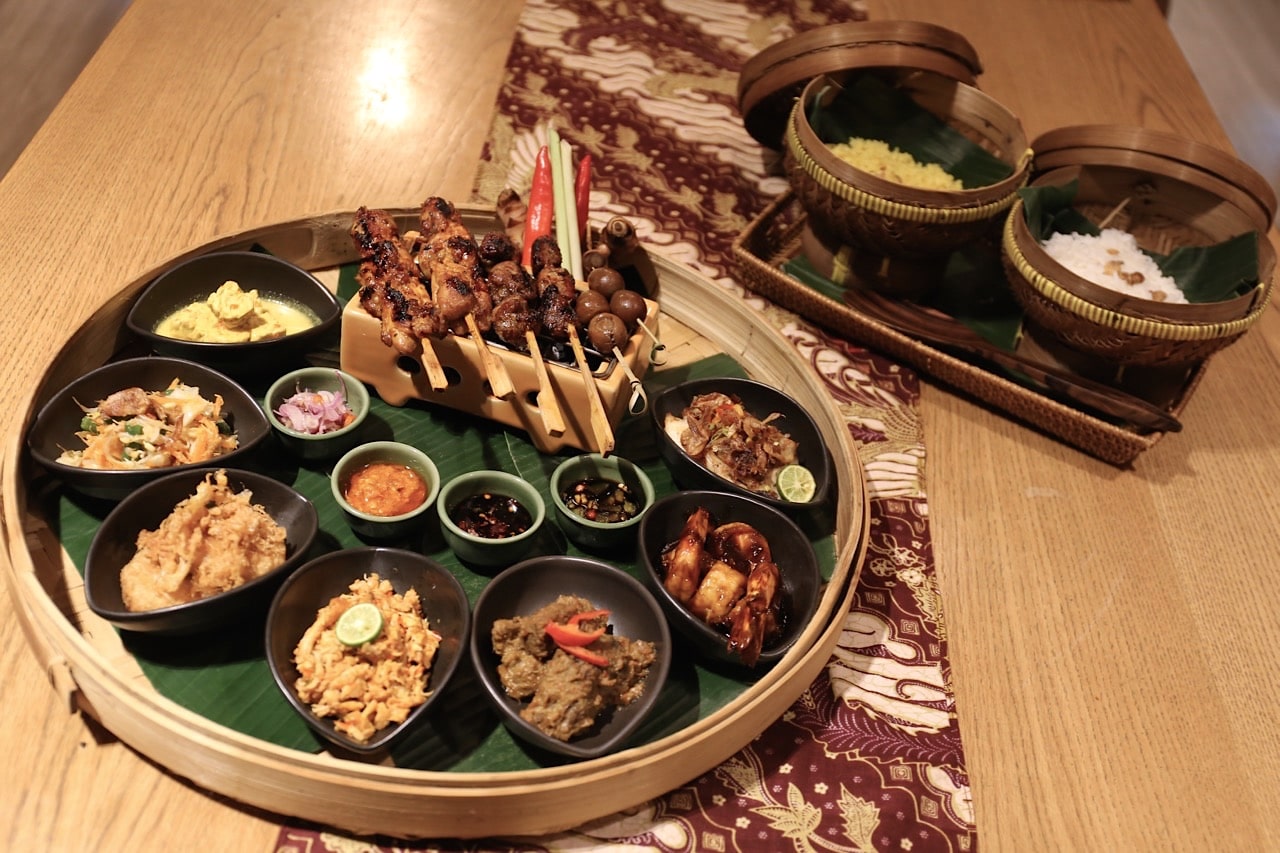 The name Rijsttafel literally meaning “rice table,” originated with the Dutch plantation owners, who liked to sample selectively from Indonesian cuisine. Steamed white and yellow rice is always the centrepiece and accompanied by a range of different meat, poultry, seafood and vegetable dishes. These boiled, grilled, roasted, steamed, wok-fried or deep-fried dishes are complemented by krupuk (rice crackers), acar (pickled sour vegetables) and a range of chili and onion sambals. 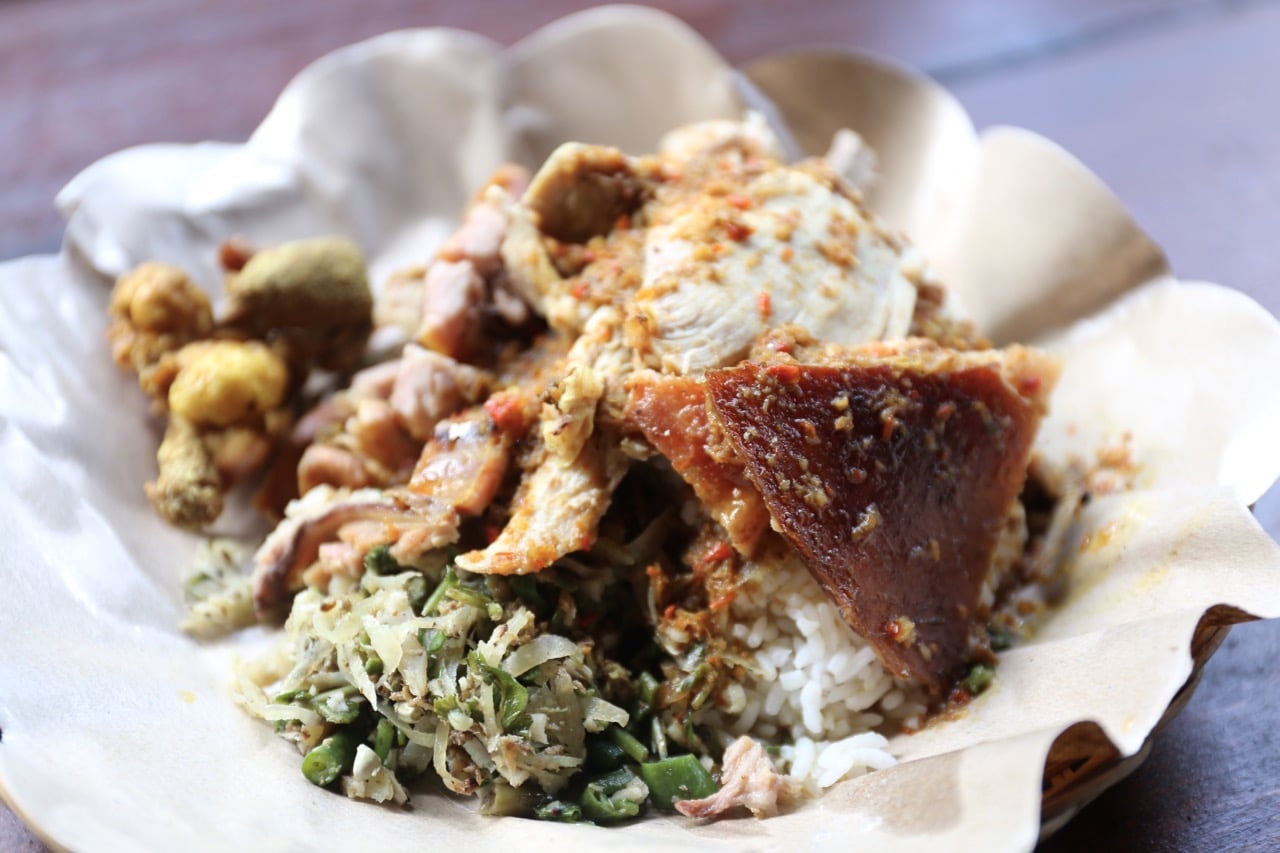 Babi Guling is Bali’s most iconic dish, spit roasted pig served with lawar and rice. If you’re traveling throughout Indonesia the dish will be somewhat of a shock as throughout the rest of the Muslim country you won’t find pork served a plenty. The best place on the island to feast on Babi Guling is in Ubud at one of the friendly Ibu Oka outlets.

5 Luxury Hotel Cocktail Bars to Sip Through in Bali

Travel Tips for Sidemen, the Undiscovered Masterpiece of Bali

How Much Does the Maldives Cost: From Luxury Resorts to Budget Travel Options 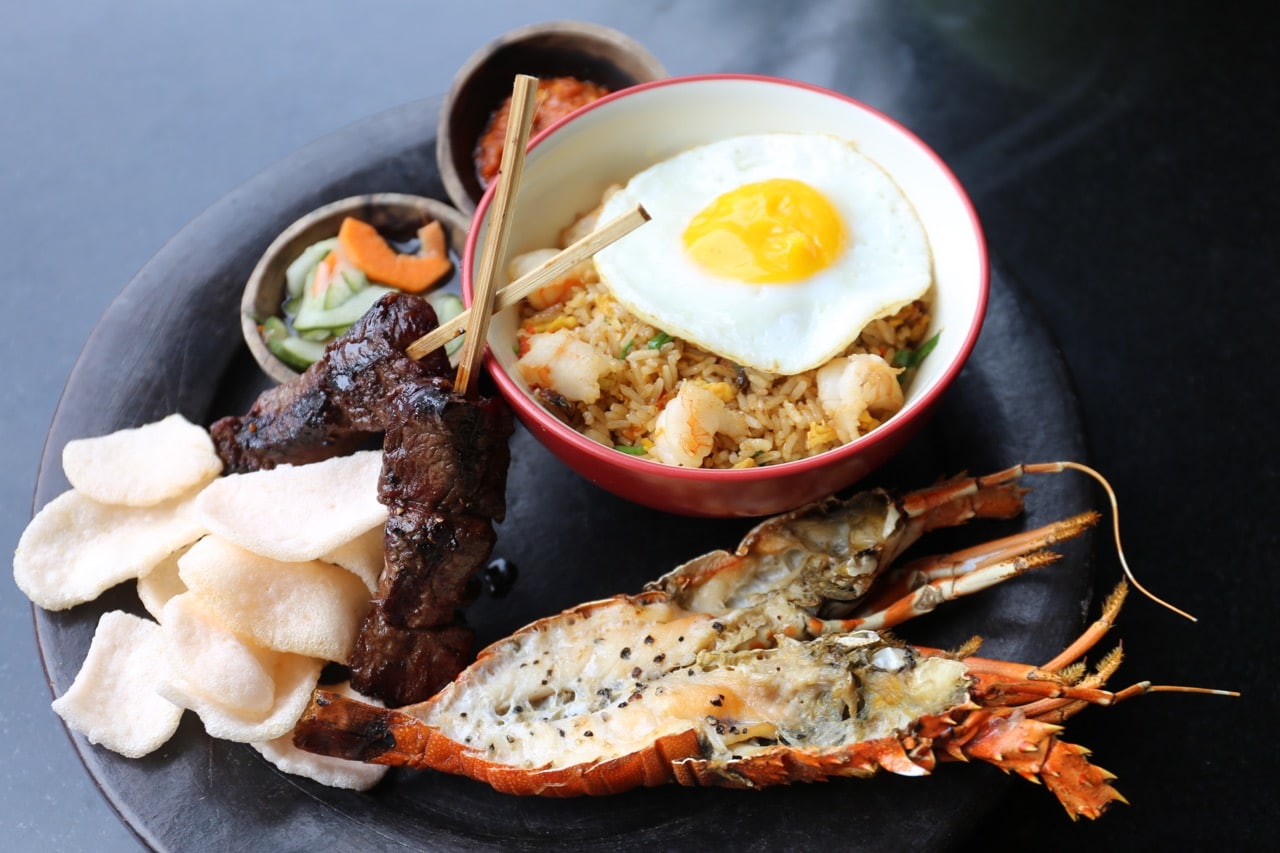 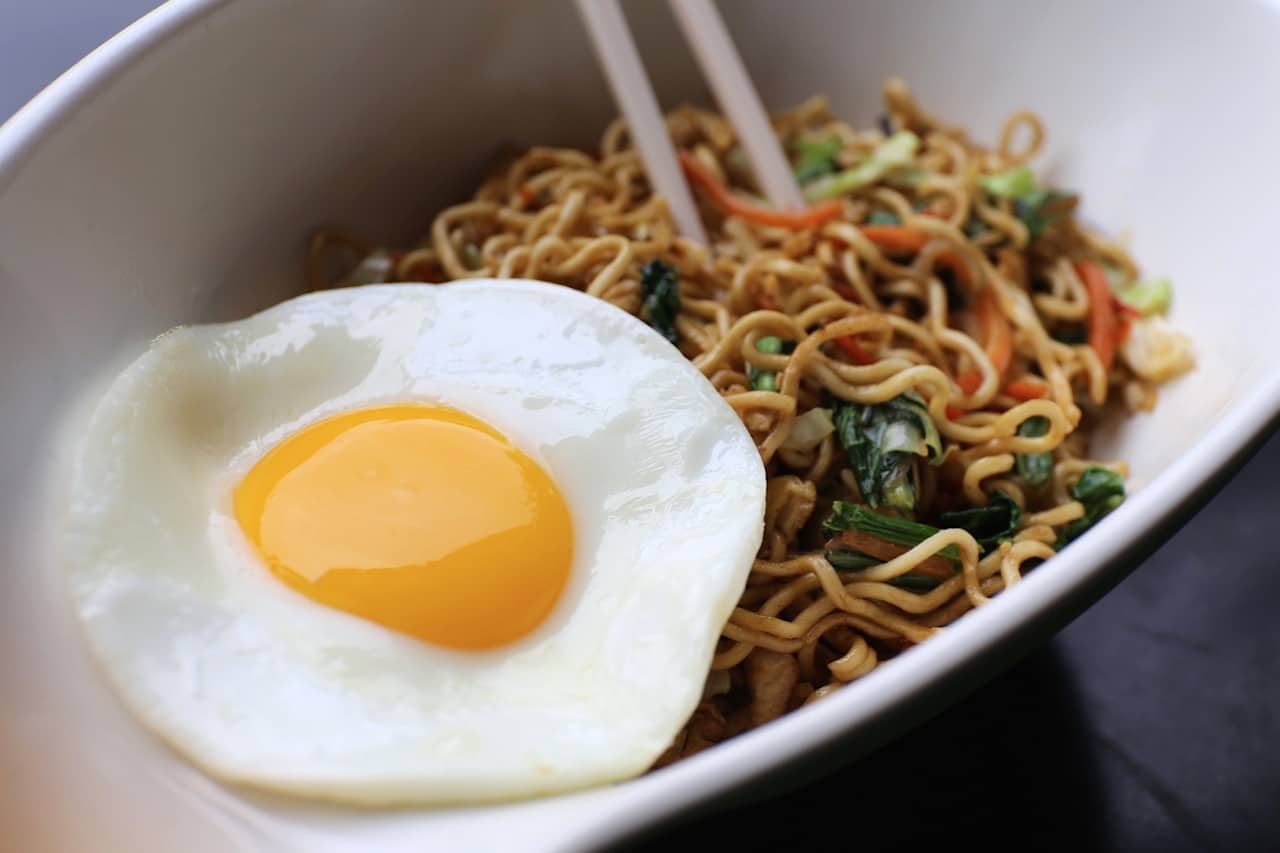 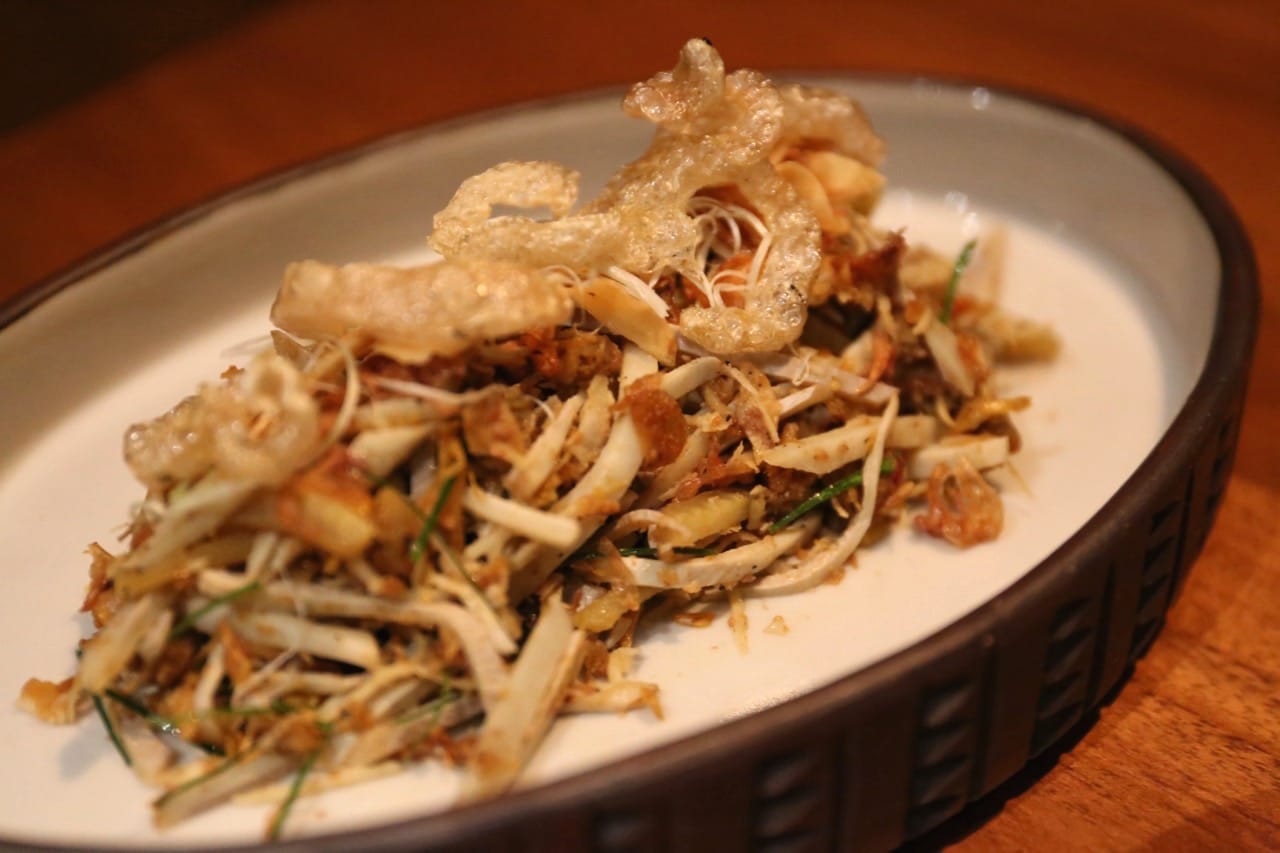 Lawar is a Balinese dish created from a mixture of vegetables, coconut and minced meat featuring rich herbs and spices. The dish typically consists of green beans, beaten eggs, kaffir lime leaf, coconut milk, palm sugar, fresh grated coconut and fried shallots. Lawar is named according to its additional protein, for example lawar with chicken is lawar ayam, lawar with pork is lawar babi and lawar with jackfruit is lawar nangka. 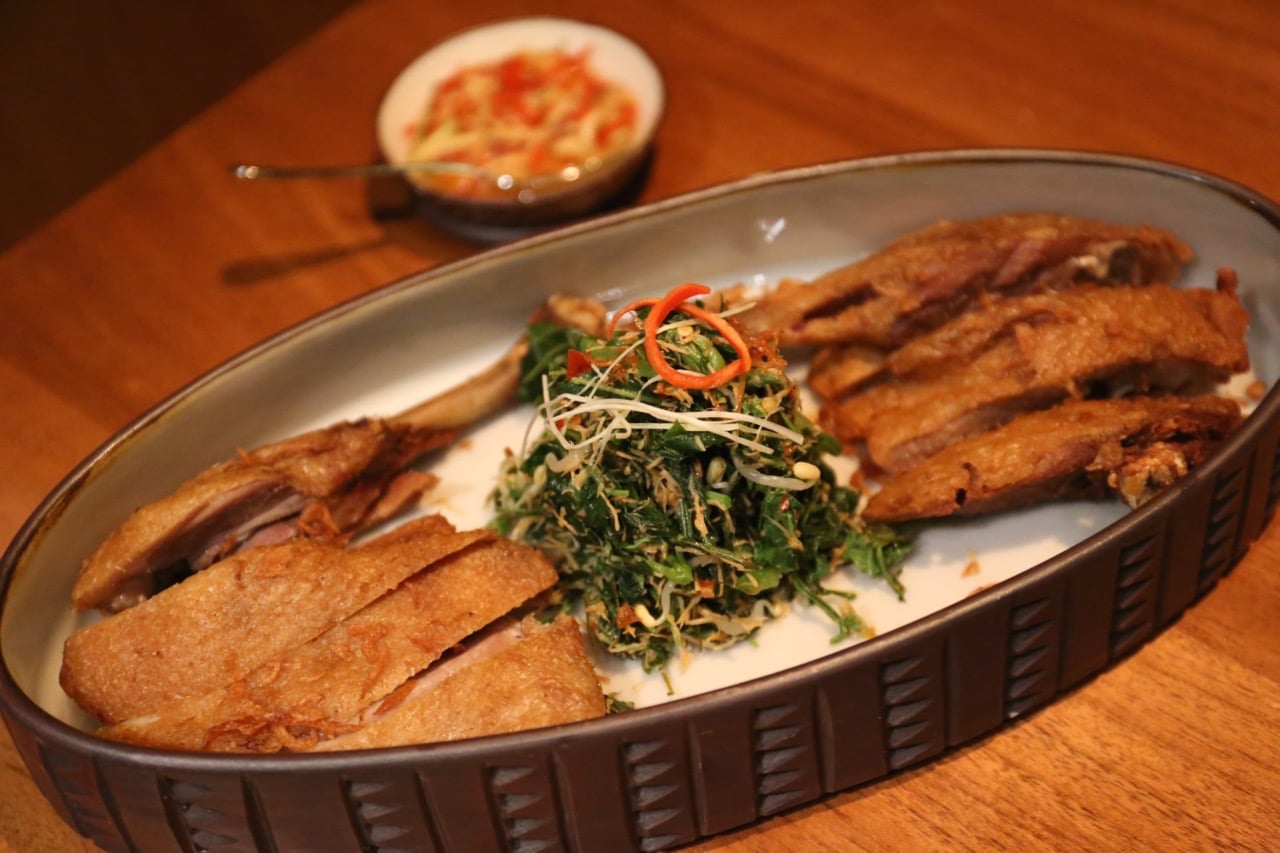 Bebek Goreng is a special Balinese dish where a young duck is seasoned and then steamed or boiled before being deep-fried. Expect the meat to be lean, flaking off the bone and incredibly tasty. Typically served with rice, sambals and fresh vegetable slaw. 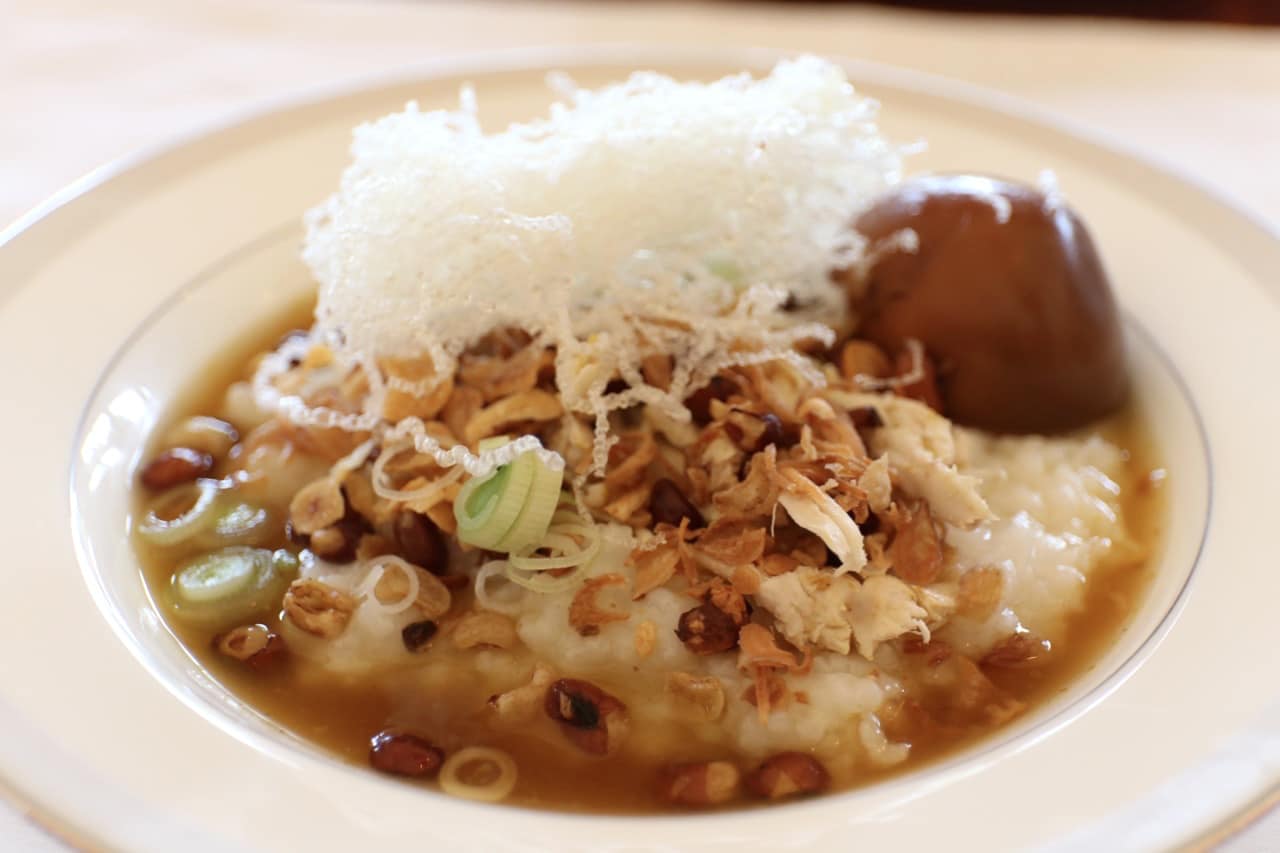 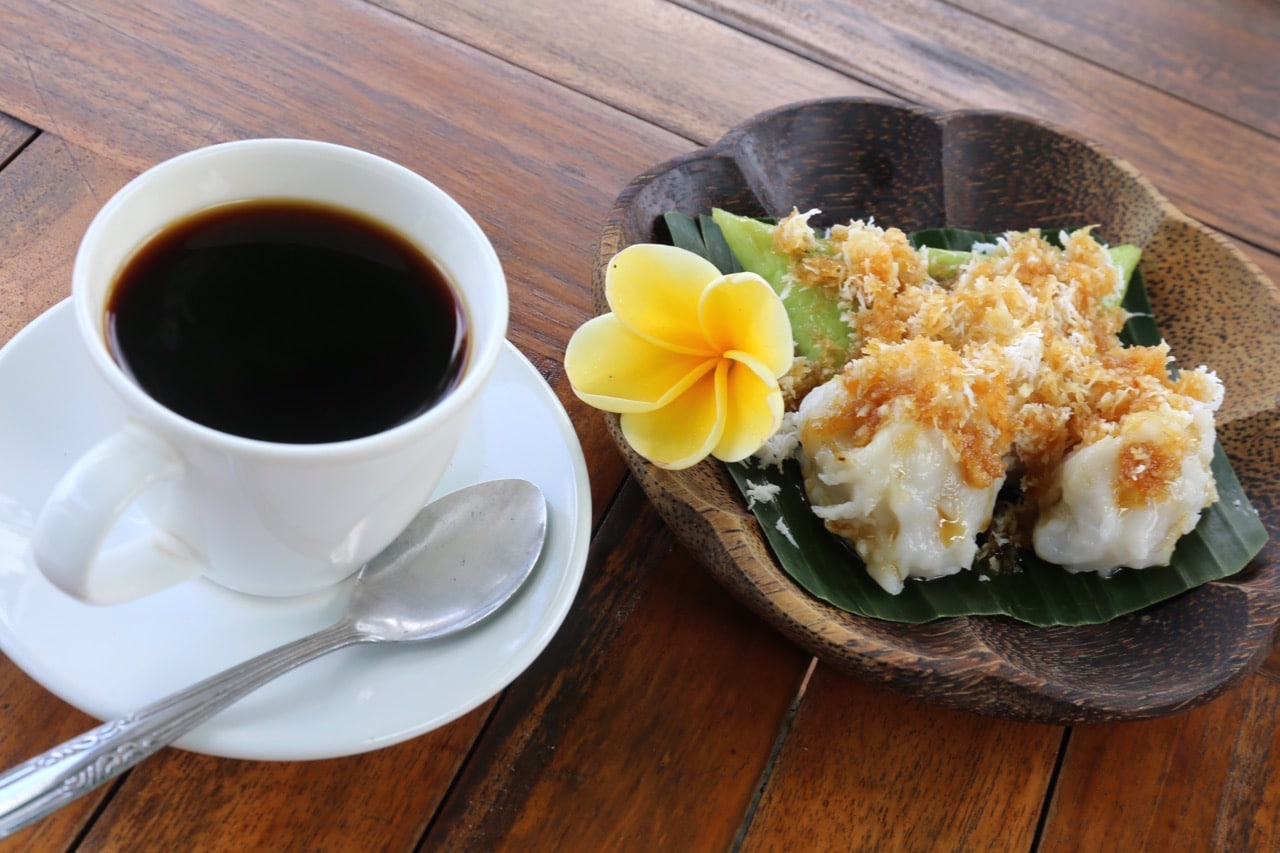 Kopi Luwak is the world’s most expensive cup of coffee. The steep price point (anywhere from $15-50 a cup) is attributed to the fact that the beans are sourced from partly-digested coffee cherries eaten and defecated by the Asian palm civet. The final product once it arrives in your cup has a light but distinctive aroma and has a refined taste on the palate, sometimes referred to as the ‘Champagne of coffees’. 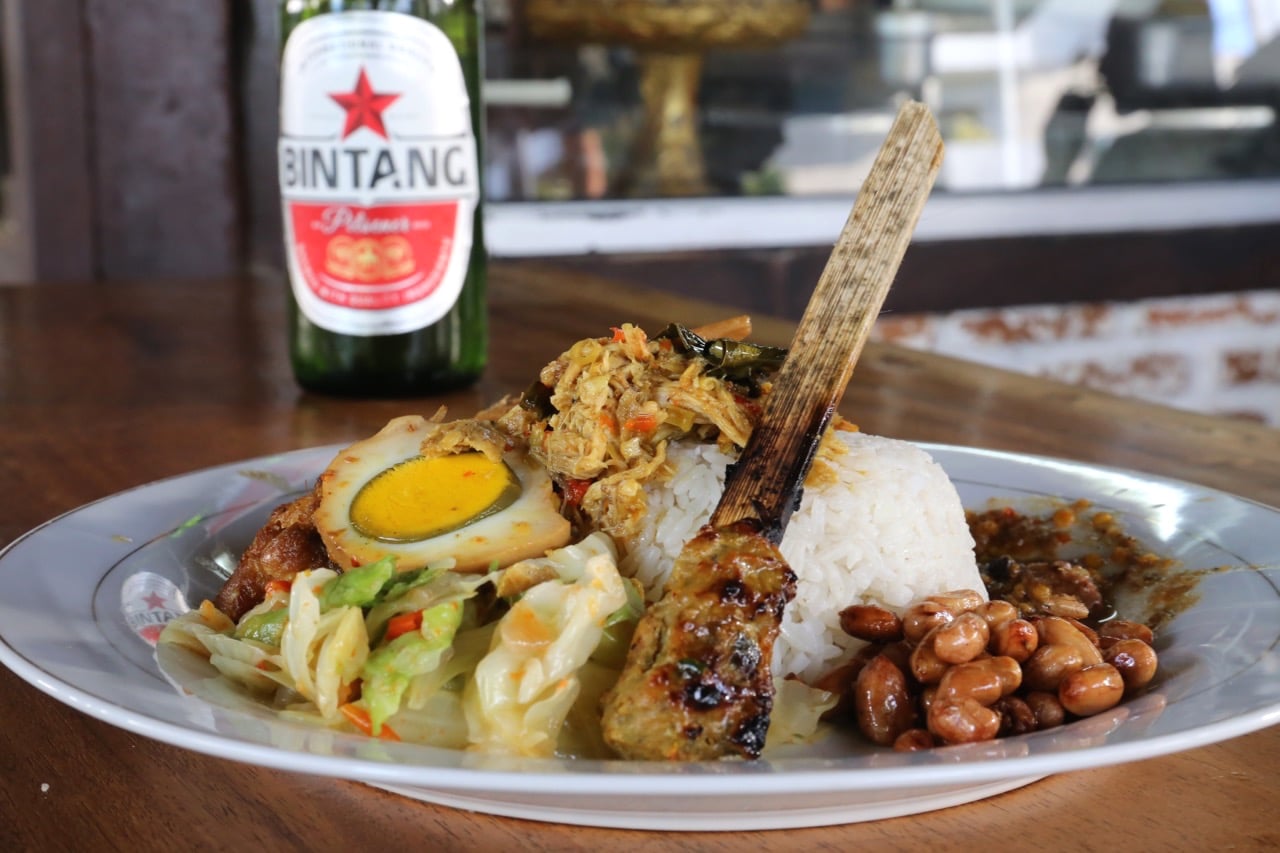 Nasi Ayam Campur is a classic Balinese street food served cheap (the dish above was just $1.50) at local warung (food stalls). The dish consists of a scoop of white rice which is accompanied by small portions of a number of other dishes which include fried peanuts, cabbage slaw, hard boiled egg, spicy fried chicken and grilled satay lilit skewers. 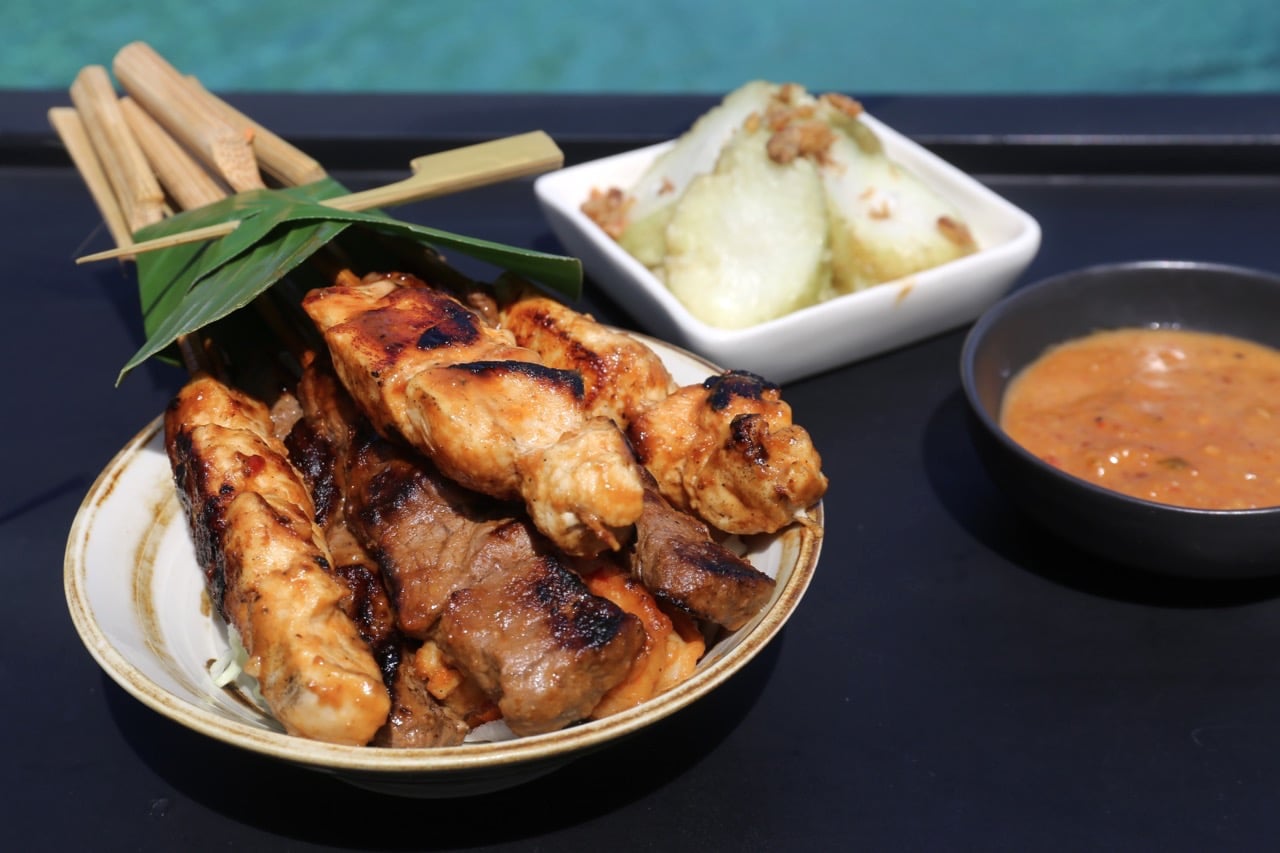 Satay is one of Indonesia’s most popular exports to the West, classically served as a street food with vendors tending skewers on roll away BBQ carts. Satay consists of seasoned, skewered and grilled meat served with a spicy peanut sauce. 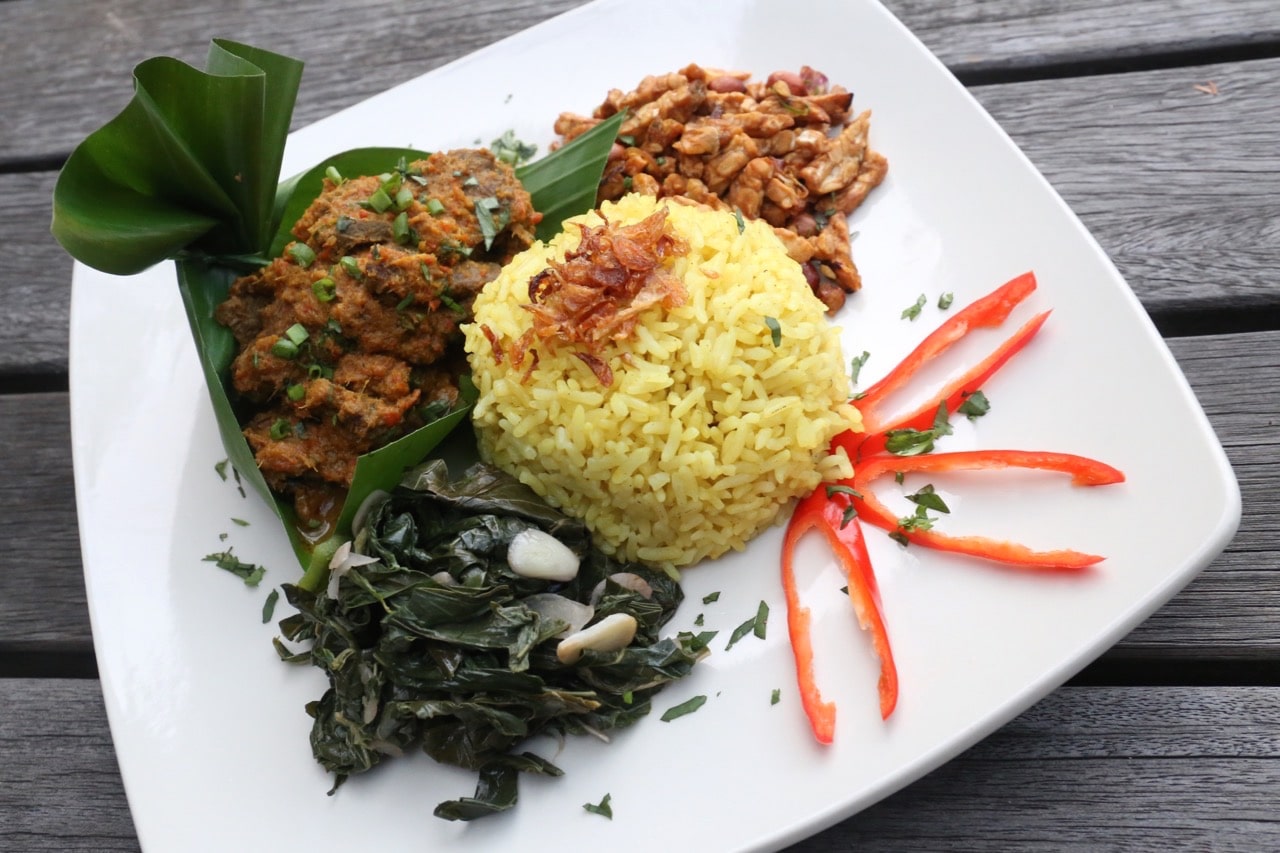 Beef Rendang is a spicy Indonesian meat dish which originated from the Minangkabau ethnic group and is now commonly served across the country. You’ll find the dish most commonly prepared with beef which is cooked in coconut milk, a paste of ground spices such as ginger, galangal, turmeric, lemongrass, garlic, shallots and chilli. 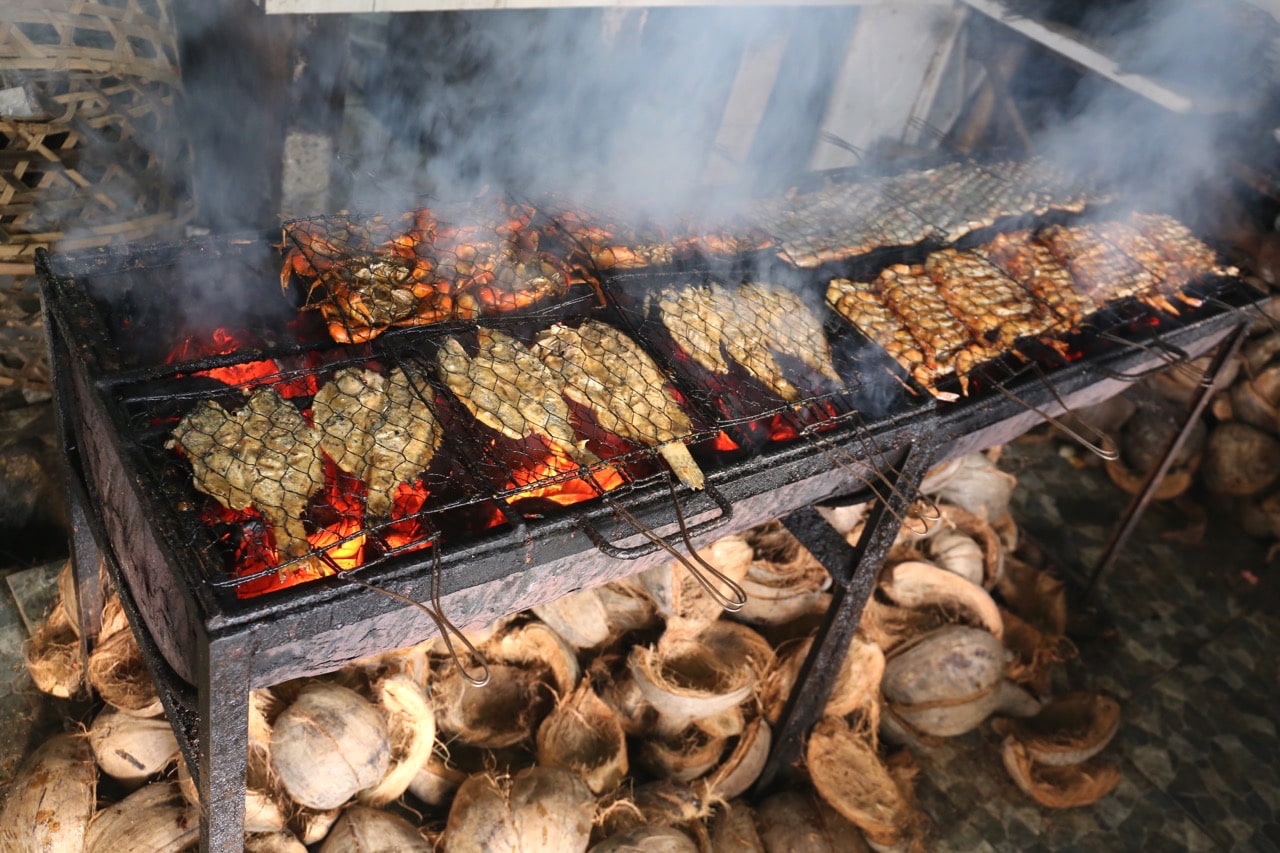 Every morning at dawn the Jimbaran fishermen return to shore to trade at the bustling Kedonganan fish market. At sunset the beach becomes the scene of a daily ritual as hundreds of visitors take their seats in the many warung – the simple seafood cafes that run the length of the bay and serve up the catch of the day which are fired up on coconut husks. The feast includes bamboo steamer of rice, along with tasty steamed Balinese water spinach, home-made garlic, tomato and chili sauces and baked potato. 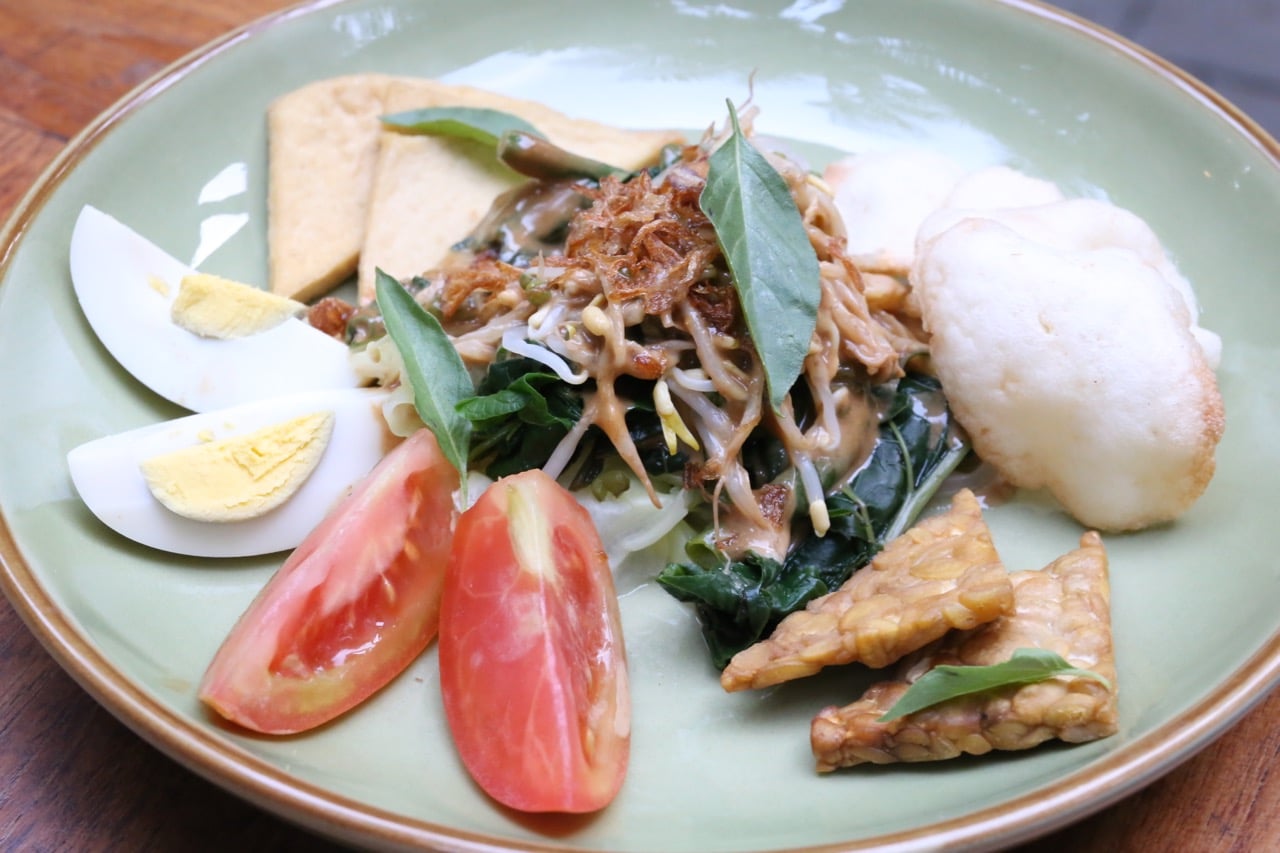 Gado Gado in Indonesian literally means “mix-mix” since it is made of a rich mixture of vegetables such as longbeans, bean sprouts, spinach, corn and cabbage. The salad is served warm (the vegetables are all steamed) and accompanied by krupuk a local cracker. 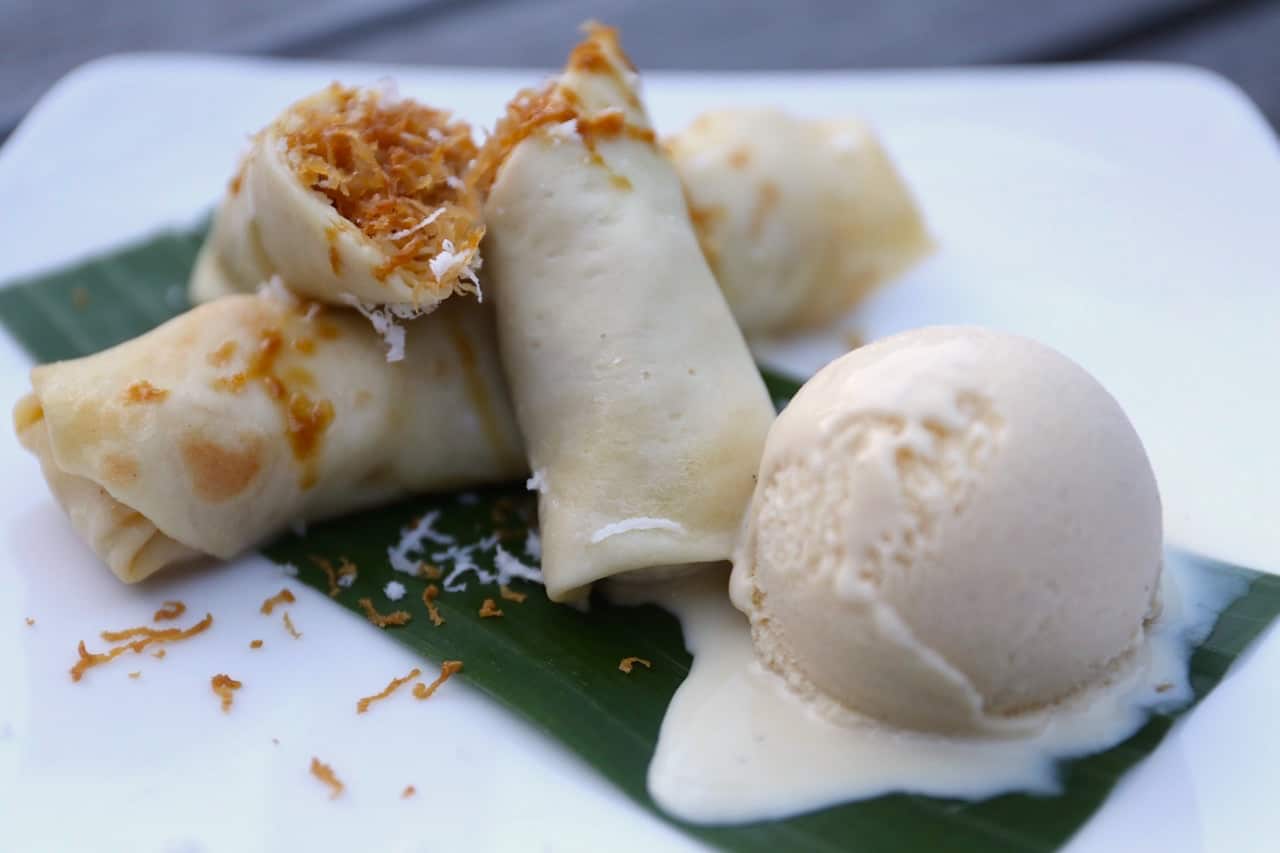