Stewed Pear is our favourite quick and easy dessert to make during the Fall harvest season.

Fresh pears are stewed and poached in a skillet on the stove then flavoured with cinnamon, cloves, white wine, dry sherry, Grand Marnier and Disaronno amaretto.

Serve this homemade spiced Pear Compote recipe on French Toast, pancakes, ice cream, or yogurt. You can prepare it as a chunky topping or smooth sauce.

My family loves making this easy stewed pear recipe during the Fall harvest season when orchards are thriving in Ontario.

The simple and versatile dessert recipe can be made with any kind of pear. Our favourites are Bartlett, Anjou and Bosc.

What Is Poached, Stewed & Compote Fruit?

So what’s the difference between poached, stewed and compote fruit?

Fruit Compote is the name of a particular dish, while poaching and stewing are terms used to describe the desserts required cooking method.

What Is The Difference Between Compote and Jam?

Compote and jam are two different products made from similar ingredients.

Compotes have bigger pieces of fruit in them, and smaller berries can and be kept whole, whereas jam has smaller pieces of fruit, sometimes even pureed. Compotes are not canned and have less sugar than jam.

What Is The Difference Between Coulis and Compote?

A coulis is smooth fruit puree that is sometimes strained, while a compote is usually pieces of fruit in a sugary syrup like sauce.

How Do You Thicken Compote?

Compote conformed to the medieval belief that fruit cooked in sugar syrup balanced the effects of humidity on the body. The name is derived from the Latin word compositus, meaning mixture.

In late medieval England it was served at the beginning of the last course of a feast, often accompanied by a creamy potage. During the Renaissance, it was served chilled at the end of dinner.

Because it was easy to prepare, made from inexpensive ingredients and contained no dairy products, compote became a staple of Jewish households throughout Europe. In modern French, the term refers to usually unsweetened fruit purée without fruit chunks, such as applesauce.

Today, it is widespread and often served in lieu of vegetables in Northern European countries such as Germany, The Netherlands, Belgium, in Scandinavia and France.

Dried fruit is often used for compote by cultures from Eastern Europe, and its syrup is also drunk as a beverage. Both are called kompot.

You May Also Enjoy These Fruit Compote Recipes…

You can serve homemade fruit compote warm, at room temperature or chilled.

You can enjoy it all on its own served in a small bowl with a spoon.

Since our recipe is boozy, you can use the syrup and stewed pears as a sweetener and flavour when making craft cocktails.

For dessert we love serving the syrup sauce and tender fruit with ice cream, cakes, pudding or in a milkshake.

You can also serve the syrupy fruit over a cheesecake.

My family likes to make a chunky stewed pear compote so we typically cook the fruit until fork tender.

The longer you stew or poach the pears in syrup the more they will break down. The texture of the pears is a preference and totally up to you. If you want the compote to have more of a thinned sauce consistency cook the ingredients for a few more minutes over the stove.

You can add stewed pears to a blender to create a smooth sauce for sundaes or breakfast bowls.

Have fun with your spirit collection by making substitutions based on what’s available on your bar cart. You can substitue dry sherry for other fortified wines like marsala or sweet red vermouth. On the sweeter side, swap out the dry white wine for a late harvest Riesling.

Add apple cider vinegar for a tangy and sweet-tart edge.

Add lemon juice to tone down the sweetness of the pears.

If you want to make a kid-friendly non-alcoholic pear compote substitute the wine, dry sherry, amaretto and brandy, with pear juice or water. You will likely need to add additional sweetener so taste while you’re cooking.

Want to make vegan pear compote instead of this vegetarian recipe? Simply swap the butter for your favourite vegetable oil like canola or rapeseed.

This stewed pear recipe is so delicious your family will likely finish eating it all in a day or two!

If you’re planning on double or tripling the recipe, store leftovers in a large jar at the back of your fridge for up to a week.

Compote can also be frozen and enjoyed once thawed.

You can not can or preserve pear compote and store it long term like you would a jam.

You May Also Enjoy These Pear Recipes… 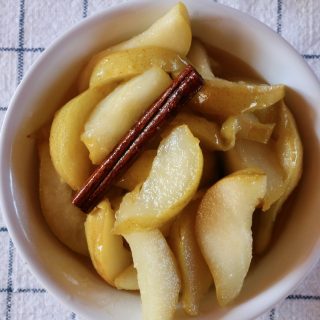