Is there really any region in America more delightful to adventure through then Down South? It’s got friendly folks, honest hospitality, spicy soul food, fascinating history, awe inspiring architecture…and for Canadians freezing away the winter, did I mention the heat?

Two years ago I finally made it to New Orleans and came home inspired by fluffy beignets, magnificent Mardi Gras and the heart of an enthusiastic culture best expressed via soulful Jazz and Blues. After falling head over heels with NOLA, Savannah was the next ever so obvious suspect on my hit list. Just to give you a heads up, I’ve even done some research into something like Landmark24 Homes, as I am considering moving here one day. After seeing all the things you can see and do here, you’ll get a better understanding why I love this city so much.

Most have familiarized themselves with Savannah through the famous films that have been shot here over the years. Tourists today like to live vicariously through these screenplays while on holiday, standing in front of the famous church where that feather floats in front of Forrest Gump, tip toeing through the eerie cemetery which appears in Midnight in the Garden of Good and Evil and enjoying a sip at The Six Pence Pub on Bull Street where Julia Roberts appeared standing in her nightgown in the classic 1995 hit Something To Talk About.

With its pedestrian-friendly layout and innovative urban design, Savannah serves as a balm for the senses. The city of Savannah inspires visitors with its emerald tree canopy, quaint cobblestone streets and majestic architecture. Take the time to wander off the beaten path and experience the history, beauty and charm of this beloved coastal city that tastes just as good as it looks!

15 Things to See and Do in Savannah 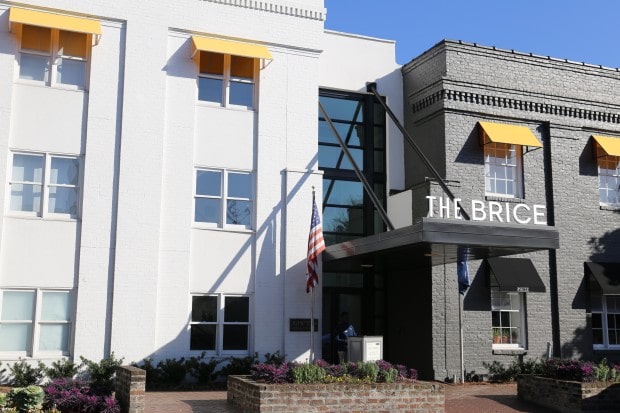 Located in Savannah’s Historic District, The Brice Hotel is perfectly situated so all of the city’s top attractions are but a short stroll away. The two-storey property was originally built in the 1860s as a cotton warehouse and later on, in the early 1900s it transformed into a Coca Cola bottling plant. For its last costume change it was a humble Holiday Inn before Kimpton swooped in and offered her a stylish makeover.

Each evening at 5pm the hotel hosts “wine o’clock,’ where smiling sommelier offers a complimentary glass for each guest to swish through. It’s a great way to get to know some of the other folks calling the hotel their home sweet home and quickly transforms the stunning whitewashed lobby into what feels like a house party at your rich and eccentric aunt’s living room. Skip out the door with that buttery chardonnay and you’ll find an al fresco Secret Garden where its ever so easy to wash the day away as crimson sunset splashes above. 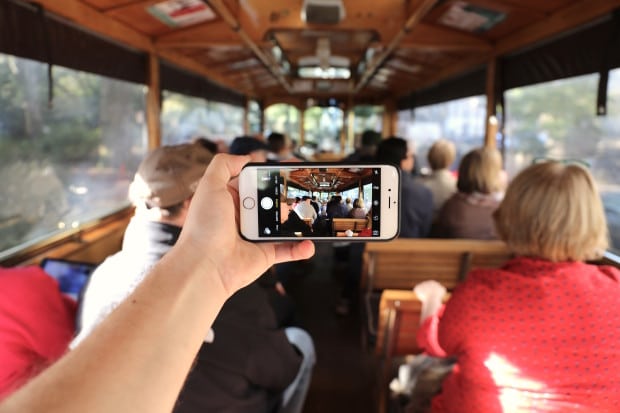 I’m not one to typically hop on a city bus tour but after several locals urged me to spend my first morning getting a lay of the land via organized tour I found myself hopping on one of the city’s ubiquitous trolleys. I sat perched on the back bench with Old Savannah Tours for their 90 minute zip around the city. The experts suggested I do the entire tour at once and then hop on/hop off throughout the rest of the day. The tour features 16 stops led by a friendly driver who chirps fun facts and local gossip about the city. Coast past historic River Street, stare up at the awe inspiring Cathedral of St John the Baptist and romance yourself while sun splashes through an overhead canopy of dangling Spanish Moss. 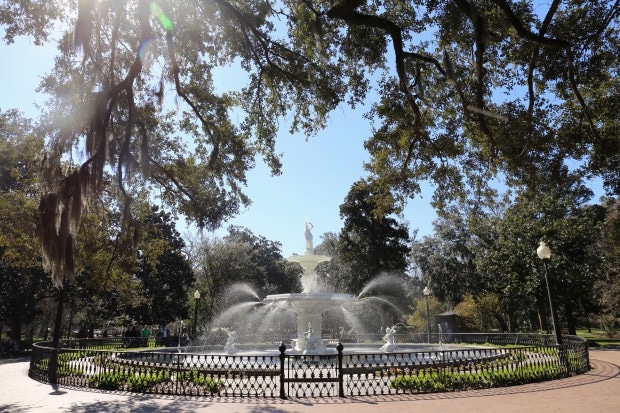 Forsyth Park is the largest park in the historic district. The park covers 30 acres of land just south of Gaston Street and north of Park Avenue. For locals and tourists, Forsyth Park is a hub of social interaction. It’s here where you can enjoy concerts, sports, people watching, sun bathing, reading, relaxing and tap your feet to a crooning sax player busking in the shade.

One of the most photographed spaces in Savannah is the fabulous, frothing fountain found at the north end of the park. Pro photographers stand for hours waiting to get a perfect shot, that split second when tourists hop out of their frame. I got lucky, only waiting 30 minutes to capture this magical moment of quiet calm. 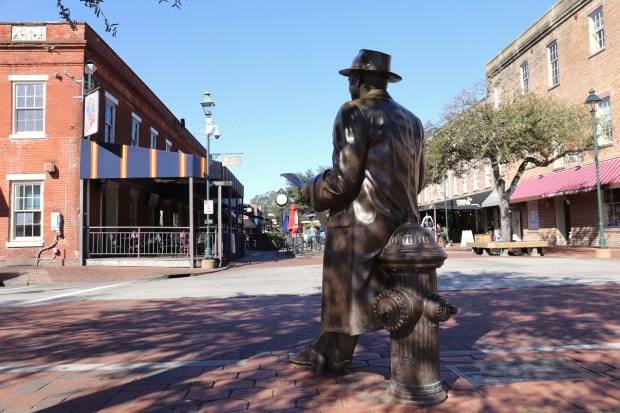 City Market has been the heart of Savannah since the 1700s. Centuries ago, Savannahians gathered here for their groceries, services and other goods. The Market thrived even after two fires, survived the Civil War and weathered Savannah’s great 1896 hurricane – only to fall in disrepair as the population and commercial opportunities spread out.

Today, thanks to Savannah’s preservation movement, City Market is home to some of the Historic District’s most popular restaurants, art galleries and boutique shops. They fill the historic storefronts and warehouses and spill into the shaded pedestrian courtyard between Ellis and Franklin Squares. 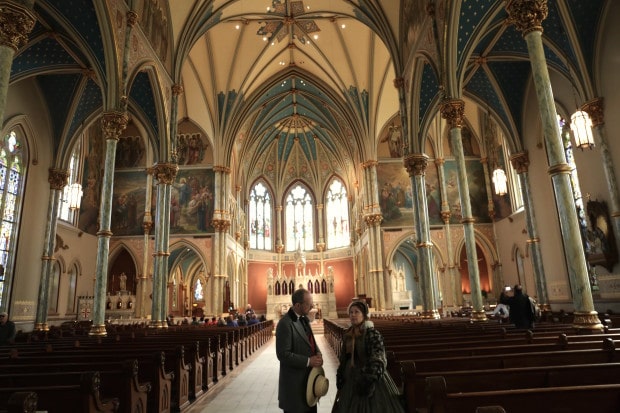 Cathedral of St John the Baptist

The Victorian Gothic Cathedral of Saint John the Baptist is home to the oldest Roman Catholic Church in Georgia. Designed by Baldwin and Price in the 1870s, the original building was nearly destroyed by fire in 1898, but it was immediately rebuilt using the original plans. The Cathedral is located on Lafayette Square and features impressive stained glass windows, colourful arched ceilings and ancient organ. 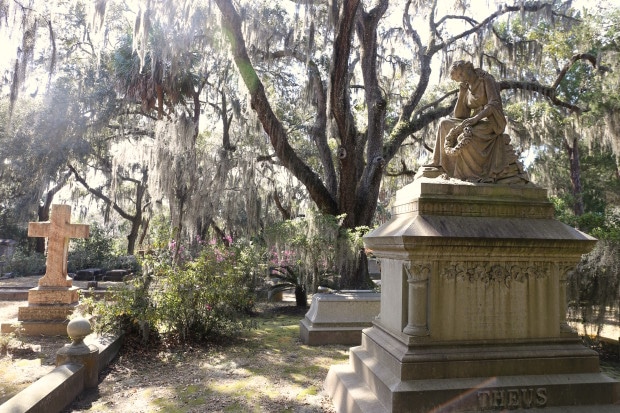 Bonaventure Cemetery is one of the most visited locations in and around historic Savannah. The grounds are widely considered to be one of the most beautiful cemeteries in all of America. The old growth oaks covered in Spanish Moss and the Victorian grave markers contribute to Bonaventure’s beauty.

There are a number of well-known individuals laid to rest inside the walls of Bonaventure. Perhaps the most well know is Johnny Mercer. The famous American song-writer is laid to rest in a part of the cemetery close to the Bull River. The most visited grave site on the property is Little Gracie Watkins. Gracie died when she was only six years old. Her father had a sculptor carve a true-to-life statue of Gracie for her grave. The wrought iron fence surrounding the grave is almost always adorned with flowers, stuffed animals and other trinkets that visitors bring as gifts in hopes of making the child’s ghost happy. 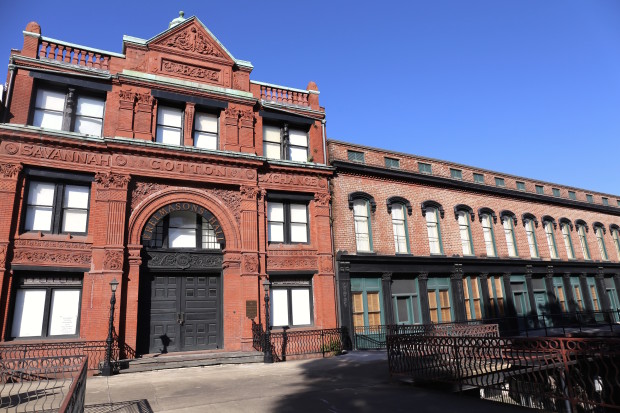 River Street is a glittering, multi-faceted gem along the broad Savannah River. The century old buildings, once cotton warehouses, have been converted to antique shops, distinctive boutiques, galleries, quaint brewpubs and elegant inns.

The cobblestone streets and rich history here remind me of strolling through the nooks and crannies of Old Quebec City. Be sure to pop by in the evening as the crimson sunset that splashes across the horizon is viewed perfectly from a park bench perched over the boardwalk. This is also where you can hop on a free ferry which putters to and fro across the riverbank. 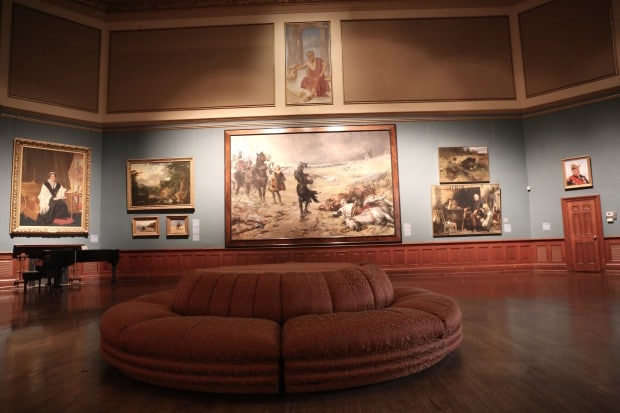 Designed by British architectural prodigy William Jay in the neoclassical Regency style, the Telfair Academy is a former mansion built in 1818 for Alexander Telfair, son of Revolutionary War patriot and Georgia governor Edward Telfair. Today the former mansion has morphed into a top notch museum which contains nineteenth and twentieth-century American and European art including paintings, works on paper, sculpture, and decorative art. 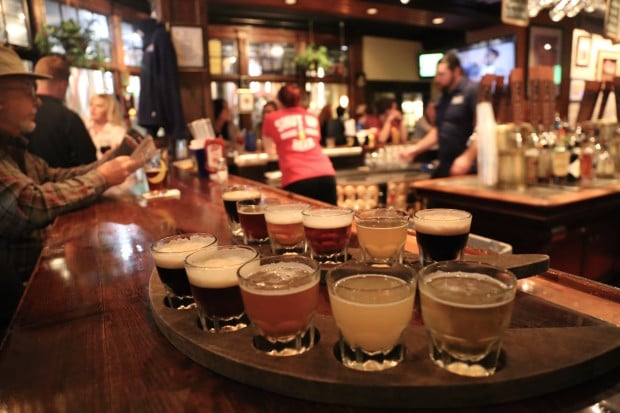 Hop up at the bar and order the bartenders beer sampler, featuring eleven of the breweries offerings of the moment. You’ll see locals flipping through the local paper as brewmasters worry over wort and get hop happy behind a wall of glass windows which offer a peak into the preperation. You’ll find yourself puckering with a grin while sipping through a list of hilarious brews such as Wild Wacky Wit, Swamp Fox IPA and The Bomb Irish-style Dry Stout. 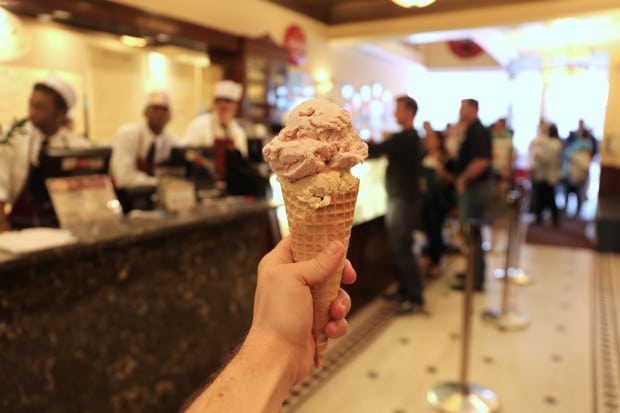 Looking to give your sweet tooth satisfaction in Savannah? Leopold’s Ice Cream has been serving up smooth, swoon-worthy scoops since its founders, three immigrant brothers from Greece, opened up shop in 1919. Generations of local folks have grown up loving Leopold’s, which perhaps explains why a massive line snakes out the shop and wraps around the street every day of the week. I do love a pretty parlour which offers a slice of history! Popular flavours include Butter Pecan, Lemon Custard, Peanut Butter Chippy and Huckleberry Cheesecake. 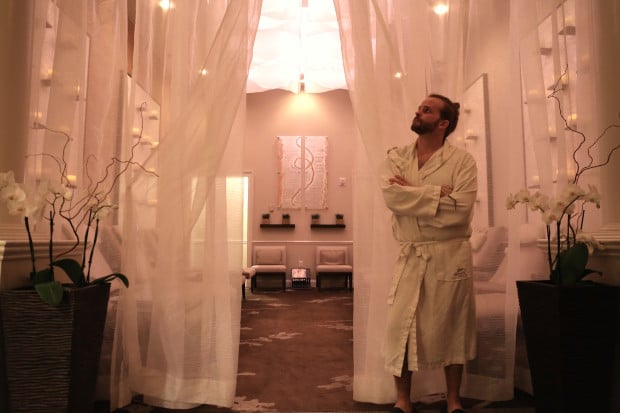 If you find yourself waking up with a hangover after a late night bar hopping binge the best bet for your body is enjoying a bit of rest and relaxation at the Heavenly Spa at The Westin Savannah Harbor Golf Resort and Spa. From Savannah’s historic district stroll over to River Street and hop on a free ferry which lands directly in front of the hotel. 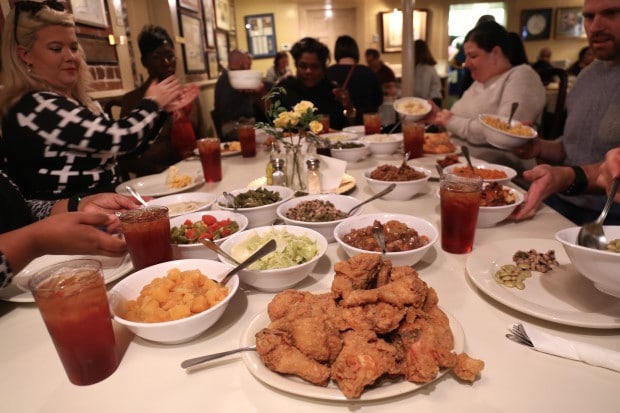 Mrs. Wilkes Dinning Room is Savannah’s most famous restaurant. Every day over the lunch hour a massive line snakes down Jones Street. Lips smack and stomaches growl. It’s a feast worth waiting an hour in line for.

Once inside guests are seated at communal tables and served over twenty dishes family style. Sip on sweet iced tea while gobbling up fried chicken, macaroni & cheese, butter beans, candied yams, collard greens, okra & tomatoes and peach cobbler. The dishes served here highlight the regions slave history, showcasing recipes which would have been prepared on plantations and inspired by ingredients indigenous to Africa. 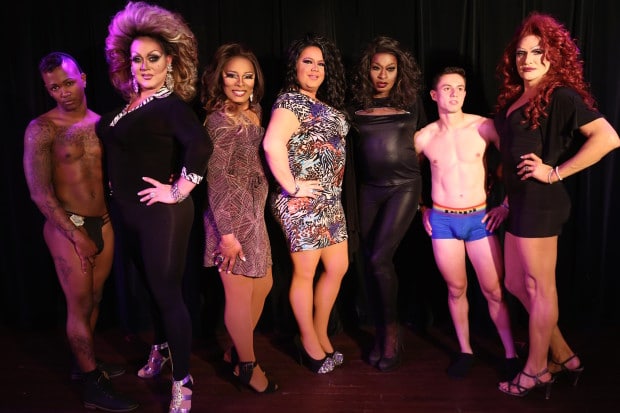 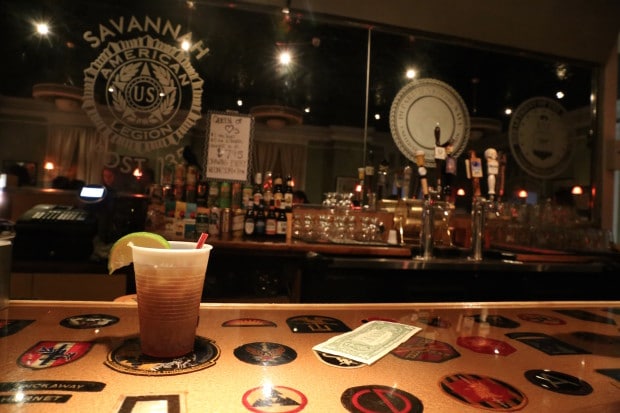 Drinks at “The Legion”

I’m always interested to suss out a local watering hole off the tourist trail and found happiness this time around in one of the most unassuming places. Head to The American Legion Post 135 on the edge of the Victoria District for the city’s most affordable libations. Each Friday strong-ass cocktails are served up for 2 bucks a drink. The crowd is almost 50% gay as historically Friday’s were known as mens night. That Don’t Ask Don’t Tell irony is not lost on me. 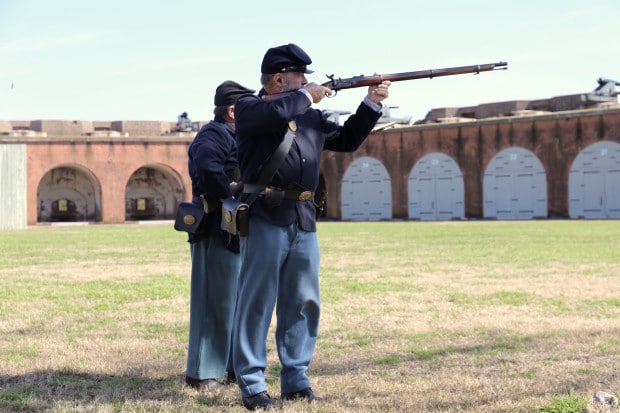 No trip to Savannah is complete without a day trip to Tybee Island. I was amazed at how easily one can whisk themselves from a bustling city to a slow and relaxing island way of life in under 30 minutes. Locals love Tybee for its beautiful beaches and cottage country vibe. If you’re a tan fan restless from beach bumming there are two great historical sites worth checking out.

Fort Pulaski’s construction was completed way back in 1845 but didn’t see very much excitement until 134 men from the State Militia seized the fort before Georgia officially seceded from the Union in 1861. Be sure to pop by before the lunch hour to watch two gents in old military costumes shoot rifles and blast off a booming canon.

The Tybee Island Light Station has been guiding mariners safe entrance into the Savannah River for over 270 years. It is one of America’s most intact having all of its historic support buildings on its five-acre site. Rebuilt several times, the current light station displays its 1916 day mark with 178 stairs and a First Order Fresnel lens which measures nine feet tall!