I was clutching my Big Mac and my eyes were darting from right to left. My cab was making rather ill sputtering noises and I wondered to myself what I would do if it broke in the middle of the highway. I had become comfortable in Manila and was a bit daunted by my plans for the next 48 hours. I would be getting on a 8 hour bus that drives north to the Cordillera mountainous region of Luzon. Arriving early in the morning I would be touring the famous rice terraces for the day and then hopping back on a night bus headed back to Manila. Sleeping in a chair for two nights straight: cringe. The taxi zoomed over expressways, bridges and through hundreds of shanty villages. We got off the highway and drove through a residential area which appeared to be having a Christmas block party. The street was full of dancing locals, chickens and wild dogs. The sky glowed with Christmas lights and shrines to the Virgin Mary could be seen illuminated on every block. 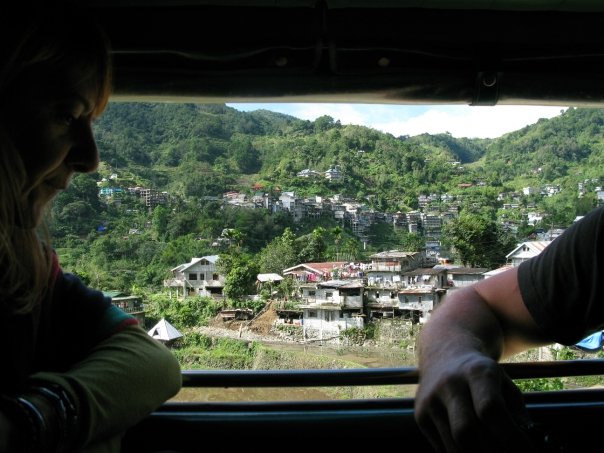 At the bus station I bought a ticket and then stared at the “tin can of a bus” which I would be spending the evening on. I met a couple from Brighton and we agreed that the bus smelled of feet. Once we sat down the interior looked grim. The ceiling was cracking and sagging and most of the windows had huge cracks and splinters. Our bus finally drove out of the lot at 10pm. A woman hopped on the bus clenching a bible. I watched her curiously as she put up her hands and the entire bus went quiet. Everyone closed their eyes as this lady spent the next twenty minutes praying for safety on our journey. I looked at my German friend sitting beside me and said, “Oh my goodness, what have we got ourselves into? Is this so dangerous that we need a prayer? Heaven help us!” 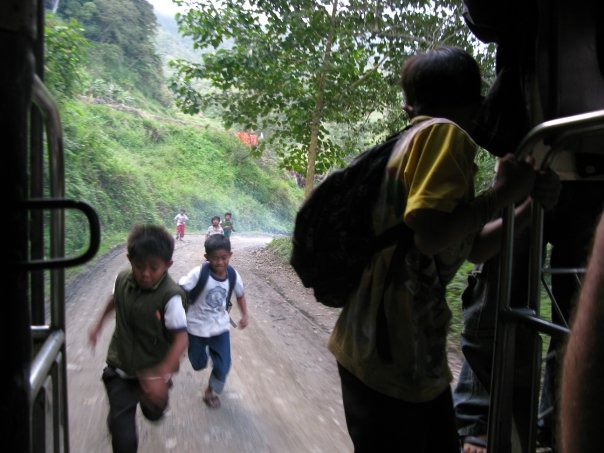 The journey was rather arduous as the driver stopped many times to drop off parcels and pick up mail. It seems like the bus companies are the countries national post service as they have regular access to the countries most remote areas. Falling in and out of sleep throughout the night I finally properly woke up at the first sight of the sun through my cracked window. The bus wound around the mountains for an hour as we drove through small indigenous villages. Our bus bounded across the dirt road which was full of pot holes and my teeth chattered. The driver would stop several times along the road whenever a local flagged him down. It seems like a courtesy here that locals get free bus rides since there are very few vehicles in the region. 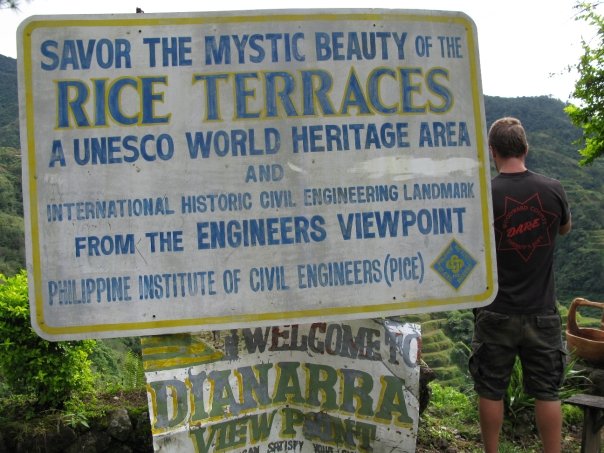 Once we arrived in Banaue I hopped off the bus and stretched every muscle in my body. In the next thirty minutes I was able to organize a group of eight tourists to pay for a private tour of the area on a Jeepeny. We all hopped in the back of the vehicle and soon found ourselves driving through the towns chicken and dog filled streets. The rock walls lining the street were covered in green moss and small waterfalls splashed onto the sidewalk from the mountains above. Our Jeepeny continued to travel up the mountain and at one point we all looked at each other in shock as we saw a school bus filled with children that also had about ten students clinging on the top of the roof. I burst out laughing when I stared in disbelief at a ten year old boy driving a small motorcycle taxi. It seems like only in the Philippines you will find an 11 year old cabby. The bones in my ass felt as though I had just sat on a rumbling washing machine for ten hours. We finally arrived at the rice terraces viewpoint and I hopped out of the back of the Jeepney as my teeth still shook in my mouth. 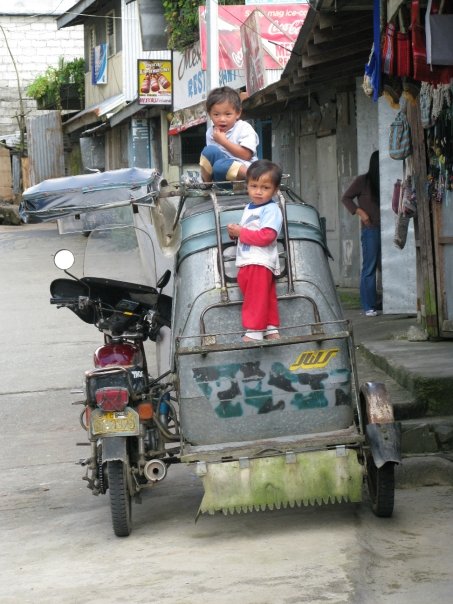 Luzon’s north is a vast expanse of misty mountains, sprawling plains and endless coastline. The region’s trophy piece is the central mountainous area known as the Cordillera, where the Ifugao built their world famous rice terraces in and around Banaue more than 2000 years ago. Legend has it that the god Kabunyan used the steps to visit his people on earth. The terraces from the Banaue viewpoint were postcard perfect. Several mountains had been transformed into pond filled terraces. A bit wild to realize these were built 2000 years ago by a group of indigenous people. 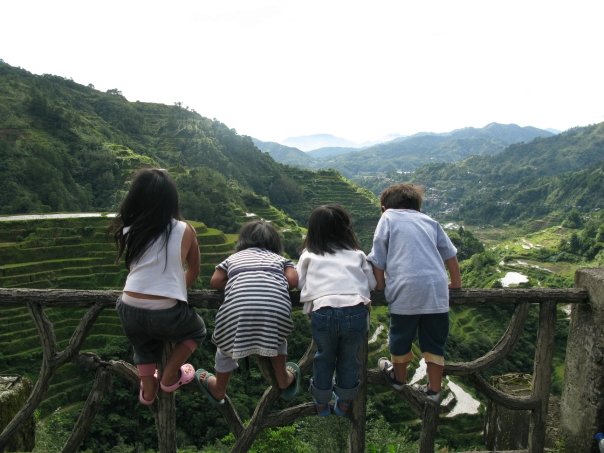 We walked down a path towards a proper patio which featured a tourist shop selling typical indigenous carvings and jewelry. We were entertained by four little local children who climbed up on the banister and barked like dogs into the wind. At the far end of the patio sat three indigenous women who I referred to as the Three Blind Mice. They each looked 100 years old, blind, wearing traditional indigenous feathered headdress and hand woven garments. Each of them had one tooth and their mouths were covered in red Beetle Nut juice. 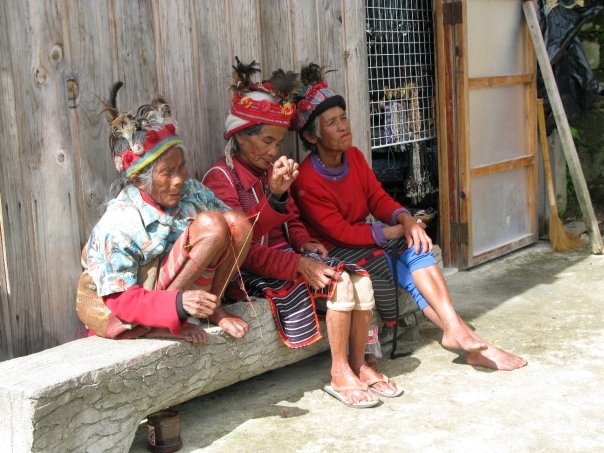 To really see the Ifugao rice terraces in all their glory you have to trek to Batad nestled halfway up an imposing amphitheater of rice fields. The trip to Batad was far more rigorous than I had ever expected. The town isn’t even accessible from the road! We had to drive from Banaue for approximately an hour on a one way roads covered in pot holes. Our Jeepeny actually got stuck twice in huge pools of thick mud due to frequent landslides. Again our backs and asses were being brutally tenderized. It seemed as though 70% of the road was under construction as men in hard hats prepared a cement road way for future tourists to enjoy. 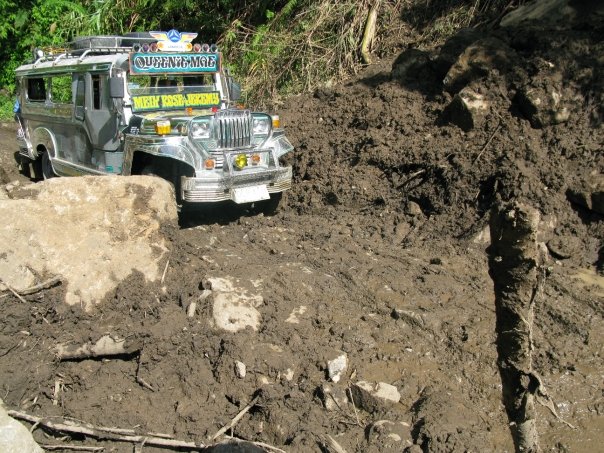 Suddenly our driver turned off the engine and told us we had arrived at the Batad Saddle. It is at the saddle (the top of a mountain and end of the road) that we had to hike down the mountain to the small village of Batad. At the top of the saddle we were quickly introduced to local animal herding customs as a large ox and several huge pigs were pulled off truck beds and herded into a small farm fenced in area. 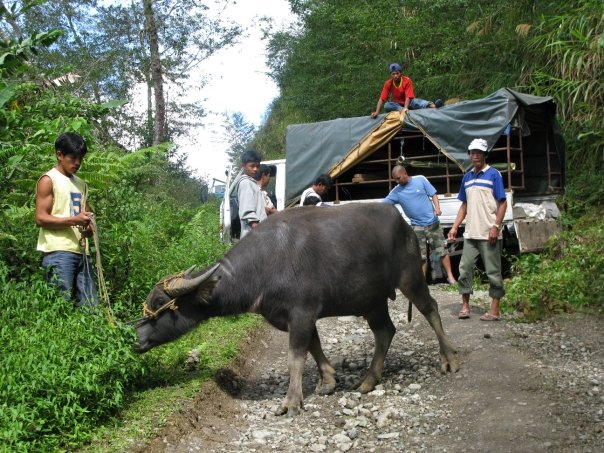 For the next thirty minutes my legs trembled as we climbed down incredibly steep, precarious and unsafe rock stairs which clung to the side of the mountain. Once off the stairs I took a moment to gasp and then spent the next ninety minutes walking along jungle lined rocky paths. The path featured a beautiful view of the surrounding mountains and jungle flora. I found myself walking around waterfalls and hopping over gushing rivers. I even ran into a wild horse and didn’t know exactly how to get around the beast. I assumed that wild horses aren’t particularly violent but I wasn’t willing to risk a sprained ankle in the middle of nowhere. So I waited for the horse to empty its bowels to run around the brute pony. 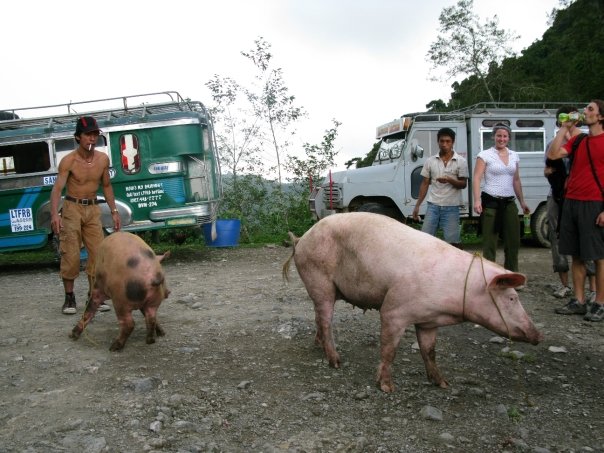 After a long, exhausting and scenic hike we arrived at the incredibly tiny village of Batad. We turned a corner around the local pub and were instantly greeted by a picture perfect panorama of the oldest rice terraces in the world. Thousands of rice paddies lined the mountain. At the base of the mountain sat about ten small shanty houses and a simple red church. Welcome to Batad. I decided to spend the next two hours sitting at the local pub eating fried noodles and a San Miguel beer. From my dinning table I was able to look out onto the terraces as if sitting on a cloud. A spectacular view! 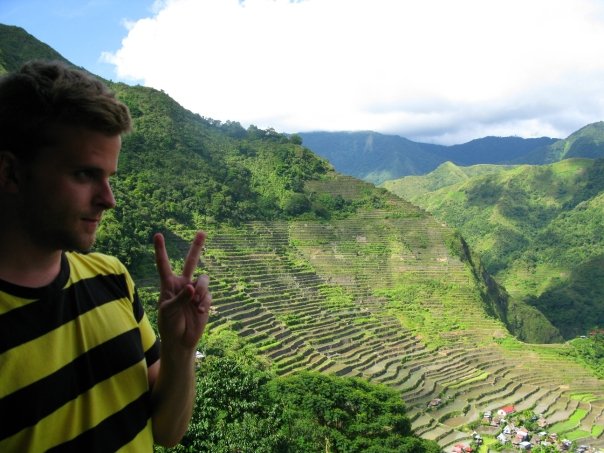 I walked back up the mountain by myself. After leaving Batad I could see way, way, way up to the top of the mountain where I could just make out the two little buildings at the Saddle. I couldn’t believe I had to walk up that far. I took a great deep breath and blasted “The Best of Abba,” in an attempt to zest up the exhausting climb. Two hours later I finally arrived at the top of the Saddle. My shirt was soaked with sweat and I sort of slumped into a chair. I gasped a few times and then once my breathing had regulated I stared across the mountains with a smile on my face as the sun set across the horizon. 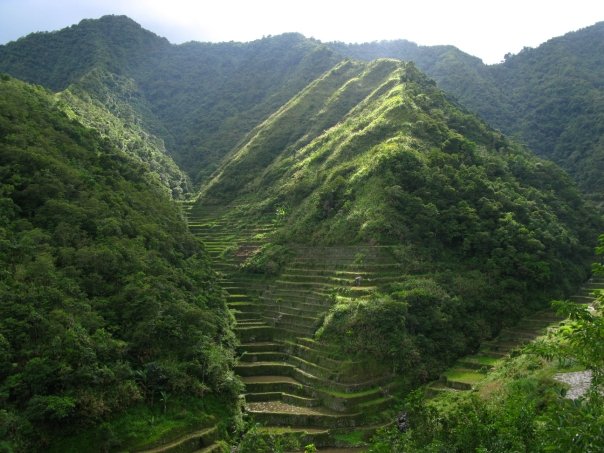 Once our Jeepeny arrived back in Banaue we had a quick dinner together. We all groaned as we hopped back on the next night bus back to Manila which would be just as uncomfortable. A lengthy eleven hours later we arrived at a garbage dump in Manila where we tried to open our eyes long enough to hail a cab back to Makati City where the world seemed a little less chaotic.