The capital of the Philippines sits on the Bay of Manila along the southern end of the island of Luzon. Manila’s moniker, the ‘Pearl of the Orient’, couldn’t be more apt – its cantankerous shell reveals its jewel only to those resolute enough to pry. No stranger to hardship, the city has endured every disaster both man and nature could throw at it, and yet today the chaotic metropolis thrives as a true Asian megacity. Gleaming skyscrapers pierce the hazy sky, mushrooming from the grinding poverty of expansive shantytowns. 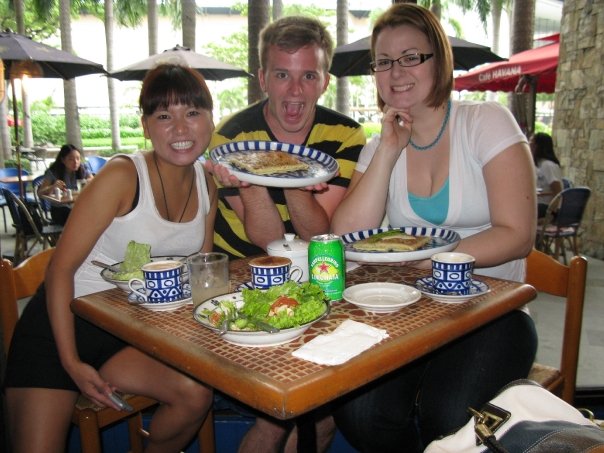 I arrived at Manila’s Ninoy Aquino International Airport in the very early morning. I was excited to be spending the next eight days in the ritzy neighbourhood of Makati with my friend from university Meaghan Misener. After passing through security I gave her a great big hug. We quickly grabbed a cab and drove through the underbelly of Manila before arriving at her apartment in the shopping mall obsessed Makati. Originally we were going to look at Condominium rental in Manila, my friends had a wonderful time when they did, but unfortunately I was little disorganised and never got it sorted! Still, we were in a great location, she lives right across from the huge Greenbelt Mall complex so we took a quick stroll of the shopping centres gardens, public terraces, restaurants and bars. Filipino’s have become addicted to the shopping mall. Locals gather here to avoid the hot oppressive weather outside. Greenbelt was full of Christmas decorations and yuletide carols. We enjoyed a light lunch consisting of salad, crepe and cappuccino at Café Breton. 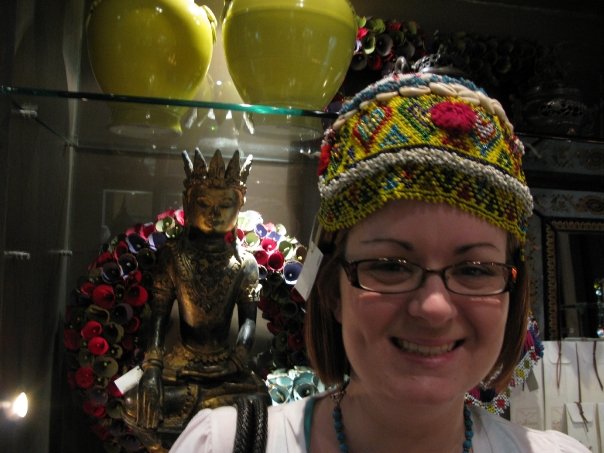 In the evening I met with Meaghan’s Japanese friend, Hiroko for a tour of the Makati Shangri-la. Hiroko is a bundle of energy and we hit it off instantly. The hotel palms decorated with Christmas lights and central garden fountain glowed in the night sky as we arrived at the hotel entrance. All vehicles have to be bomb checked and sniffed by dogs before they can drive into the hotel premises. Once arriving at the front doors we opened our bags so the contents could be scanned with metal detectors. The large ornate glass doors were then opened by four petite Filipino women with huge smiles on their faces and little top hats on their heads. We were then welcomed by approximately ten guest service agents (all tall beautiful women) who welcomed us. Hiroko used to work with these ladies so she insisted that we get pictures with them in the ornate central lobby space. She also told me that the staff are given seven uniforms for the week (each day of the week the dress is a different colour). These dresses were created by the famed designer Rajo Laurel. 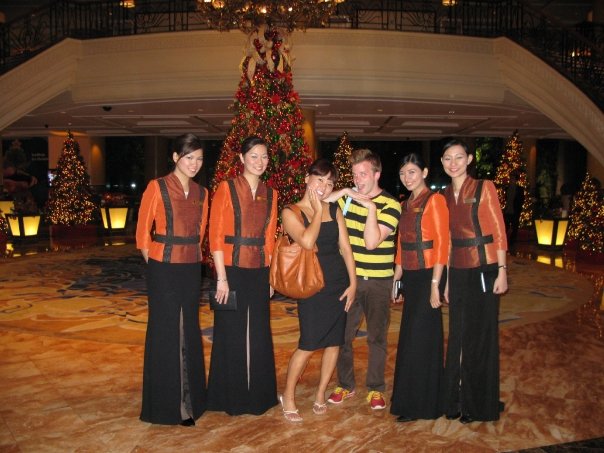 The Makati Shangri-la was by far one of the nicest hotels I had ever visited. Two “Gone With the Wind” staircases slid across both sides of the lobby and seemed to hug the massive Christmas tree which glowed in the centre. Another thirteen smaller Christmas trees were dotted across the lobby space to create a festive mood. After surveying the main floor it seemed as though an army of staff worked here. I was reminded of what Meaghan told me the night before, “in Asia the typical staff to room ratio is four employees for each room. In North America this ratio is drastically reduced to 0.6 staff for each hotel room.” When westerners comment on how amazing the service is in Asia you can understand why! The hotel is full of smiling employees who are ready to service your every need. This is only possible here because labor costs are drastically cheaper in the Philippines. 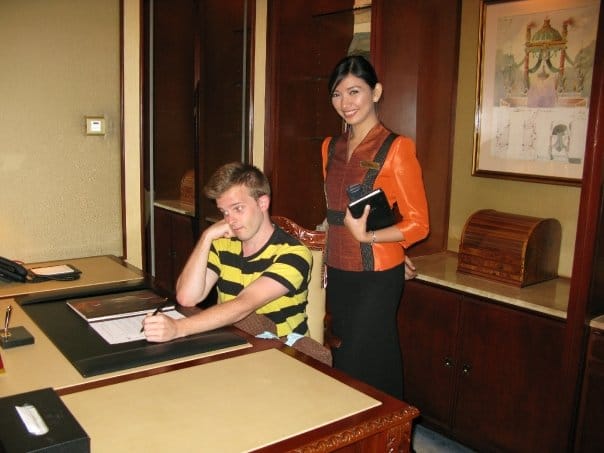 Hiroko had requested a tour of the Presidential Suite on one of the top floors so one of the elevator attendants escorted us. This hotel room is the most expensive in the country (approximately 3000 USD a night, which by 5 Star hotel standards is rather cheap). My jaw dropped as I walked around in disbelief. We entered through a beautifully carved oak door and walked onto a marble floored foyer. Directly in front of us was a large seated room with television and several couches. To the right of this area was a beautiful kitchen and large dining area. On the other side of the suite were two private studies, a spacious king sized bedroom and an opulent bathroom. The bathroom had a large power jet bath which was pressed right up against a large window. You could soak up the suds and stare out at the cities glowing skyline just over your shoulder! Incredible! 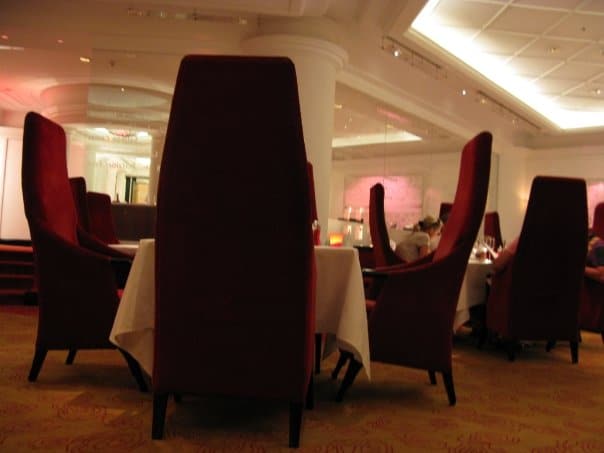 We spent the evening at RED, the hotels fine dinning restaurant, which Meaghan is currently managing. The restaurant ambiance is classical, comfortable and rouge. We sat at the Shangri-la Hotel’s huge throne cushioned seats which made us both look like we were small children. Over the next two hours we ate a delicious dinner featuring Villa Maria Gewürztraminer from New Zealand, an assortment of artisanal breads with butter and tuna cream, Foie Gras with coconut rice pudding, rosemary and port wine reduction, Roasted Duck Breast and Duck Leg Confit with green lentils and couscous and Cherry Compote, vanilla gelato on crushed pistachio and phyllo wrapped Verona chocolate.

AAfter Meaghan finished work she and I walked back to her apartment where we got into bed and spent the next several hours catching up on our lives. We updated each other on what our various mutual friends are up to these days. I gossiped about my year in Korea and she filled me in on her job. Her hotel stories fascinated me. She has seated the King of Brunei, President of the Philippines, oil tycoons from Qatar and the infamous shoe loving Imelda Marcos. She also joked about the countries most famous Catholic Cardinal who dines at the hotel regularly. His name is laughable: Cardinal Sin! 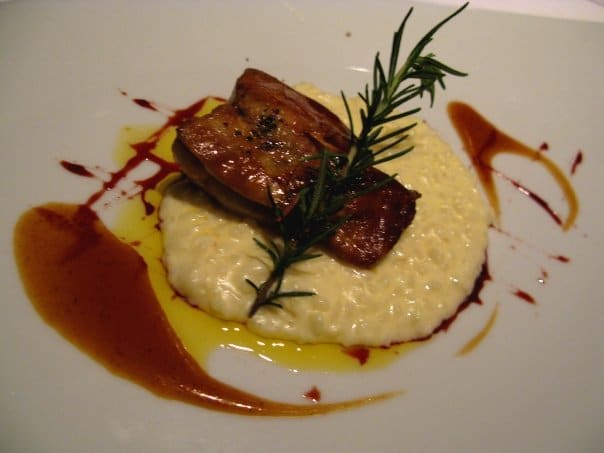 The following day Meaghan and I went out with a small group of her staff at a local bar. I have decided that Filipino food is by far the most unhealthy cuisine in the world. We ordered several plates of traditional Filipino food and my stomach lurched from the hit of fat to my system. We started with a plate of Crackling Liempo (deep fried bacon slices) which are dipped in a vinegar, cucumber, onion and chili sauce. The next dish, Sisig is a caloric nightmare of fried onions and deep fried fatty pork skin. We finally munched on a plate of deep fried tofu with a soy sauce, vinegar, raw onion and tomato sauce. My stomach rumbled all the way home. 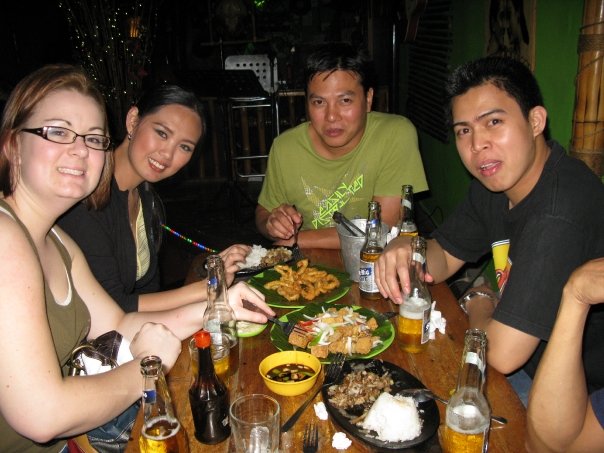 The following day was a national holiday so Meaghan did not have to go to work. We spent the morning eating at the classic Filipino diner Via Mar for breakfast. We ordered two of Meaghan’s faves: Bibirgka and Tri-coloured Puto Bumbong. Bibirgka is a circular pastry filled with cheese and smothered in butter and accompanied by fresh shredded coconut. Puto Bumbong is a sticky rice product which is mixed with three different fruits (hence the tri-colour) and eaten with butter, brown sugar and freshly shredded coconut. 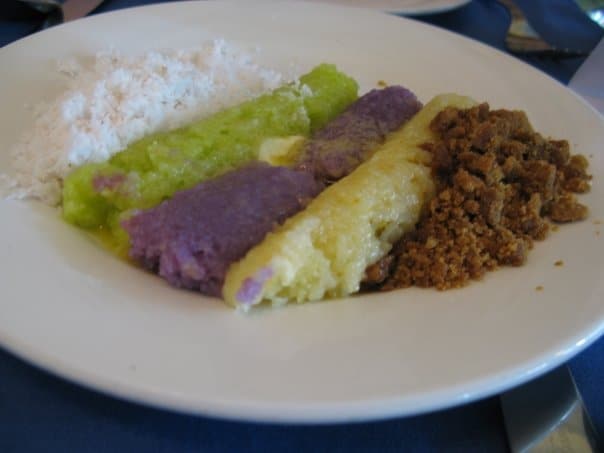 In the afternoon we headed to Serendra Bonifacio High Street. This area is home to the cities first mall complex, and has developed into a high end outdoor shopping centre filled with wine bars, restaurants, shops and dotted with water fountains, sculpture and gardens. After a bit of window shopping we stopped at Arabic restaurant Hossein. We were greeted by about thirty staff who sat us beside the only other couple in the restaurant (seeing that it was a holiday today the High Street was really rather dead). We sat beside each other on a leather love seat. While flipping through the menu I noticed that we were being stared at by the staff. The customer service here is almost excessive. My glass has certainly never been empty in the Philippines! We ordered tzatziki and naan, falafel, chicken Korma, chicken shwarma and a bowl of fragrant biryani with Persian essence. 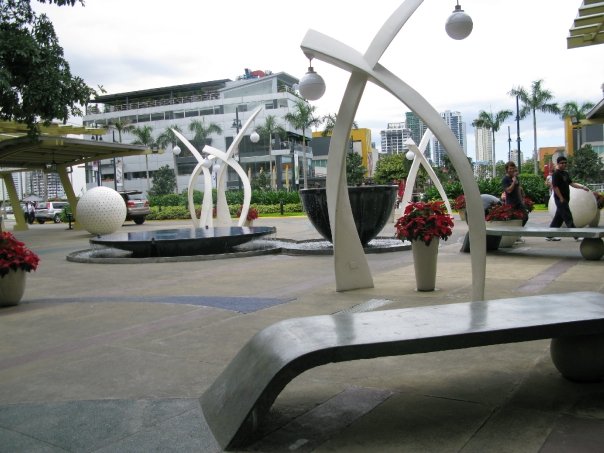 The following day I ate a large bag of dried Philippine Mango which tasted like candy and is somewhat addictive. I spent a few hours at Spicy Fingers where I slurped a bowl of Tortilla soup and nibbled on beef fajitas. After work Hiroko, Meaghan and I drove to Little Tokyo for dinner at Noda Sho Restaurant. We let Hiroko go a little crazy with the ordering (she seemed to gain even more energy when she was surrounded by a restaurant reminiscent of her homeland). We sat at a private traditional dining room on the floor with paper walls and sliding doors. We sipped on sake lemon cocktails and spent the next several hours filling ourselves with okonomayaki, spicy tuna maki, miso soup, fried tofu, California rolls, gyoza, cabbage and fried chip salad and a plate of shrimp and vegetable tempura. 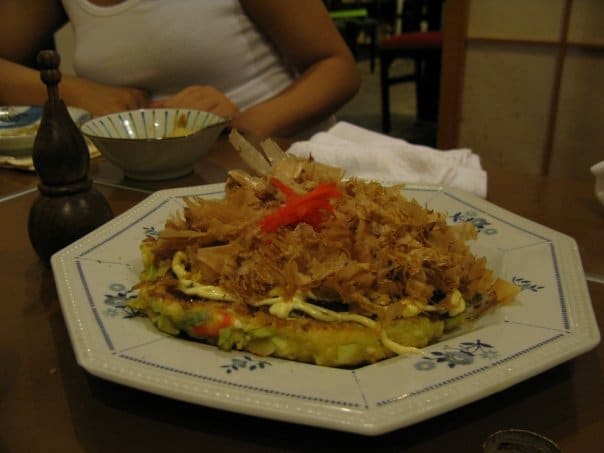 The following day I wandered to the Ayala Museum which has a beautiful outdoor garden featuring Bamboo groves, palms and a large pond filled with hundreds of orange Koi fish. I spent a few minutes staring down at the water as the fish seemed to move like a herd, one living organism made up of many beating hearts.

The Ayala Museum is the countries most prominent and museum. Crossroads of Civilizations is a tripartite exhibition celebrating the cultural crossroads that are the Philippines as seen through a millennium of contact with the great civilizations of South and East Asia. The first exhibition, Gold of Ancestors, features exquisite golden treasures recovered in association with tenth to thirteenth-century Chinese export ceramics. It features more than one thousand gold objects and celebrates the sophisticated cultures that existed in the Philippines before colonization in the 16th century. Adornments of elite individuals and their deities include a spectacular array of golden sashes, necklaces, pectorals, diadems, earrings and finger rings, bracelets and anklets. 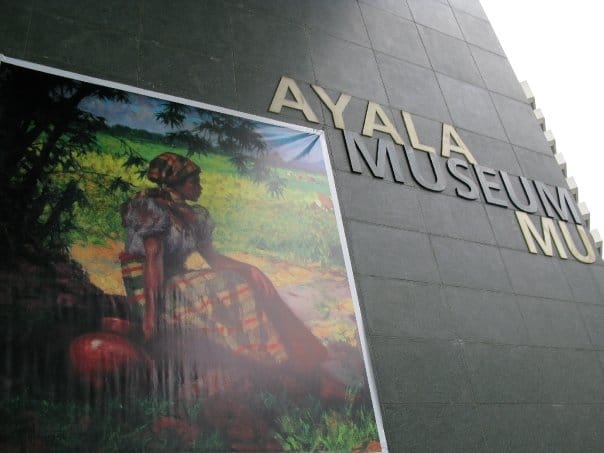 The fine arts collection features important works by three painters considered pioneers of Philippine art – Juan Luna, Fernando Amorsolo and Fernando Zobel. The museum does an amazing job at explaining the history of the Philippines, especially of the native peoples and the arduous conflicts which unfortunately have mauled the countries history. One really begins to understand that Filipinos have “known war in the modern world.” They have been invaded, occupied and tortured by the Spanish, British, United States and Japanese in the span of only a hundred years!

Throughout the historical wing of the museum they have posted life size cutouts of important historical figures so you can see how tall they are compared to you. I felt like a giant for the first time in my life when I realized that a typical native measured 4 feet 11 inches. These tiny people living harmoniously in the jungle must have been startled by the Spanish who averaged a height of 5 feet 11 inches. The final room of the permanent exhibit shows a very informative video that discusses the tumultuous times after World War II (the Marco years).