“Rochester, really?” This was the chorus heard repeatedly on the way both to and from Rochester. You might say the New York State city’s got a bit of a, erm, dull reputation with Canadians and Americans alike. While places like Chicago and Detroit are pinpointed as exciting weekend getaways for us northerners, Rochester has been overlooked. The thing is, it’s actually pretty great.

Located an hour past the American border, it’s relatively easy to drive from Toronto straight there on a Friday after the 9-to-5 (though, full disclosure, I am an eternal passenger). While there are buses and trains, if you’re aiming for a regular weekend getaway, driving is your best bet. Rochester really is a driving town, though for those keen to avoid hopping about in a car all weekend, it’s pretty bike friendly in the downtown core.

After checking into the Woodcliff Hotel and Spa, located on a golf course but a short drive from downtown, I had a whirlwind two-day tour around the city, causing me to completely revamp any previous notions about the place.

10 Things To Do in Rochester 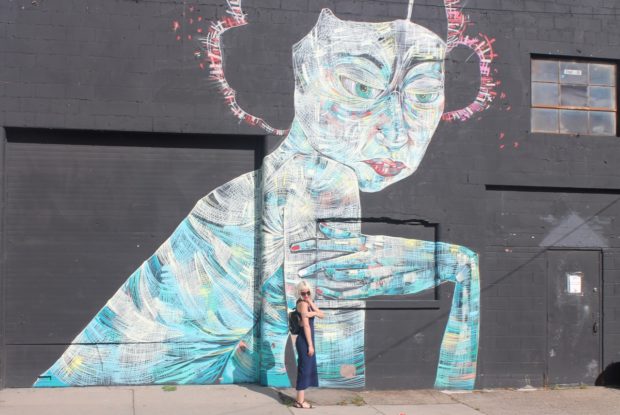 Breakfast at the Rochester Public Market

A great way to dive headfirst into Rochester is to pop by the market first thing on Saturday morning. Bustling is it ever, offering plenty of cheap ’n’ tasty foodie finds to satiate any level of hunger. Join the queue at Scott’s II for their breakfast sandwich (loaded up with fried egg and sausage rounds or bacon) or tuck into breakfast empanadas from Juan & Maria’s and wash it all down with a tasty chai tea from The Chai Guy.

Be sure to tiptoe out of the market boundaries to check out some of the amazing street art; gigantic murals abound and serve as a free outdoor art gallery. Works like the ‘Anabel’ by Faring Purth are reminiscent of Egon Schiele (a personal favourite) while others like ‘Love is Sacrifice’ by artists Soto and Max242 are well recognized around town. (Keep in mind that an annual event titled Wall Therapy has different artists painting walls around town, so the artworks are ever changing.) There’s also a charming garden space that acts like a beacon for Burners (aka Burning Man festival-goers). 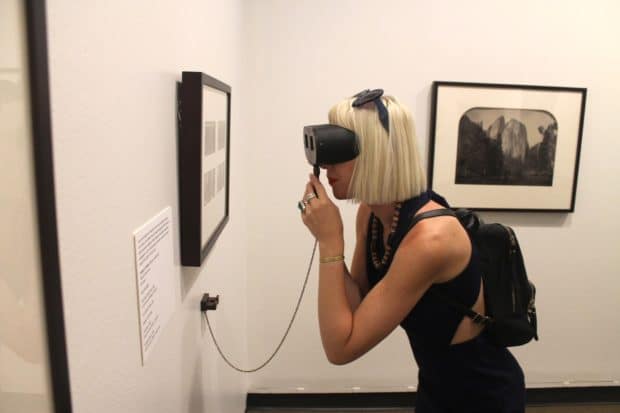 A Snapshot of History at the George Eastman Museum

Chances are, you hadn’t a clue that Rochester is basically the birthplace of modern photography. Founded back in 1947, the George Eastman Museum is actually the oldest photography museum — worldwide, that is — and houses a collection that reaches back to the dawn of photography. Because of the extensive archive (a cool 400,000 photographs) and photography equipment, the exhibits change fairly regularly.

And who is Mr. Eastman? Well he was a school dropout who ended up as mastermind behind the Kodak camera, allowing average citizens to snap photos with the press of a button. (“You press the button, we do the rest”) He was also responsible for popularizing the use of roll film once upon a time. Kodak is still headquartered in Rochester.

A real draw of the museum is the estate, which has received the official historic landmark stamp. Roam through the rooms, which have been completely gussied up in original furnishings (and careful reproductions) from when Eastman resided there until 1932. Keep your eyes peeled for incredible ashtrays made from antelope feet (he loved a good safari hunt) and be sure to step into the lush gardens, which make a compelling case for symmetry in nature. 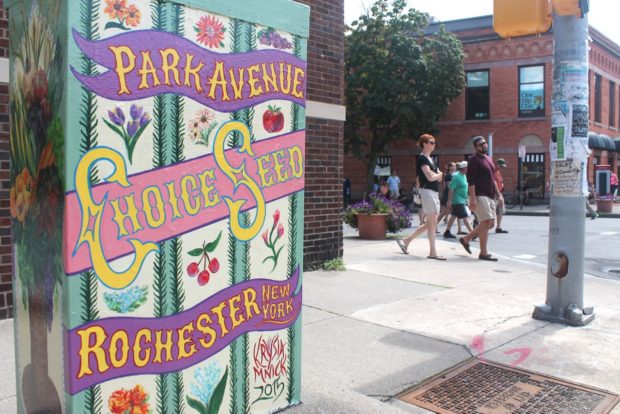 The Park Ave strip has plenty of goodies to offer visitors—even when it’s not in festival mode. With houses from the late 19th Century (think Tudor mansions and Princess Anne cottages) dotting the street, it pretty much exemplifies the American northwest ideal. A great spot for an afternoon bite is Roux, which dishes out bistro faves. Tuck into bites like the salad Niçoise, the classic burger or the croque madame, an indulgent sandwich that matches ham with Gruyere and tops it off with a fried egg and mornay sauce. A smart cocktail list includes seasonal tipples such as the Rhubarb Swizzle with tequila, rhubarb shrub, Thai basil, strawberry and a splash of rosé.

It’s not all about the food; plenty of quirky shops dot the landscape. Be sure to pop into the award-winning Parkleigh where gifty items jump out from every corner. They have an insane collection of cards that’ll check off all the boxes, whether you’re looking to congratulate your peculiar uncle on his golf tourney or one to toast your best pal’s engagement. They also have a wild selection of treats, such as mammoth Rice Krispies squares. Vintage lovers can swing by the adorably small Treasure Trove Vintage where frocks from the 1920s sit pretty alongside Sixties chiffon maxi dresses and more. They have a great selection of clothing and accessories (hats!) for creative spirits who eschew fast fashion. 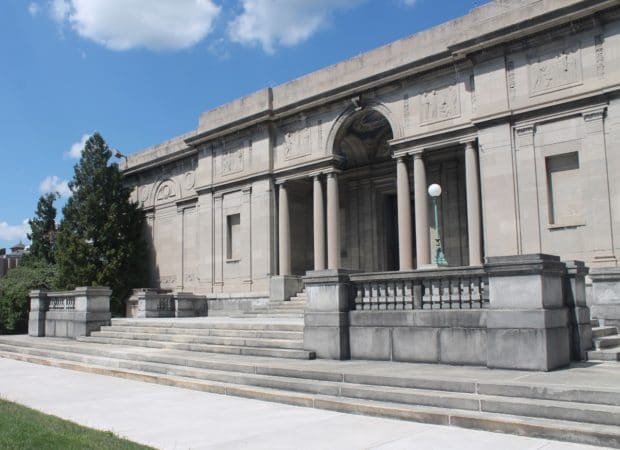 Taking in All the Art at the Memorial Art Gallery

Complimented by the rather handsome Centennial Sculpture Park, the Memorial Art Gallery and its surroundings is definitely worth a visit. Outside, works by Wendell Castle and Tom Otterness dot the landscape, while inside the gallery walls, artworks reach back 5,000 years, skipping from ancient Greek ceramics to Monet and Matisse to Mickalene Thomas’ 2015 work ‘Portrait of Qusuquzah #16’ (it boasts rhinestones!) Boldfaced American names like Georgia O’Keeffe and Norman Rockwell and Andy Warhol can be found throughout. 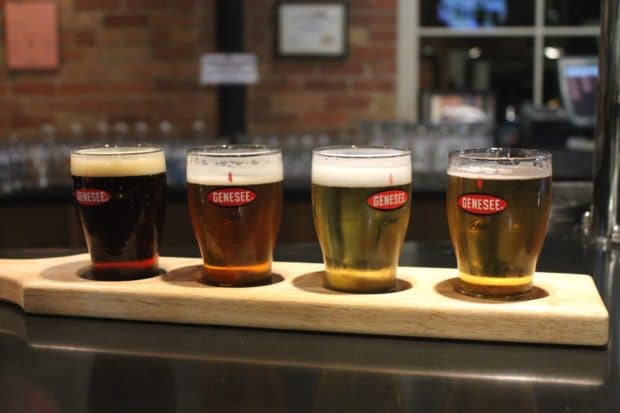 Pints at the Genesee Brew House

With a birthdate reaching back to the year 1878, the Genesee Brewing Company is one of America’s oldest breweries. This translates into the perfect excuse to head to the Genesee Brew House for late-afternoon, pre-dinners sips. Located in a former packaging centre, the space offers up sweet views of the High Falls waterfall from the rooftop. If you’ve time, take in a free brewery tour; if not, order up a flight of beers to get a well-rounded idea of the offerings. I sipped on the Scotch Ale, the Pilsner, 12 Horse Ale and their new Oktoberfest number. 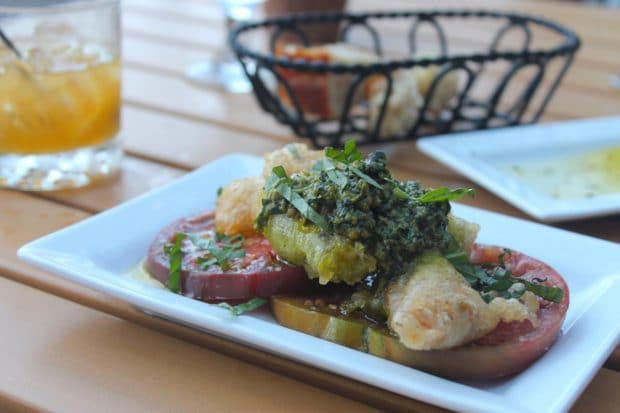 After a long day of sightseeing, it was time to dine well at Lento, a picturesque downtown eatery that trains much of the focus on local and seasonal fare. Seat yourself on the lively patio and be sure to order the amazing house-made charcuterie (I sampled the rabbit bacon — wow! — and rustic lamb and fig terrine) and fresh oysters from the seafood bar. Entrees include dishes like wild Alaskan sockeye salmon with tomato risotto and local pork chop with kale and heirloom tomatoes. But the best eats were the battered squash blossoms stuffed with herbed chevre from local cheesemonger First Light. I could have eaten multiple servings of those puppies. 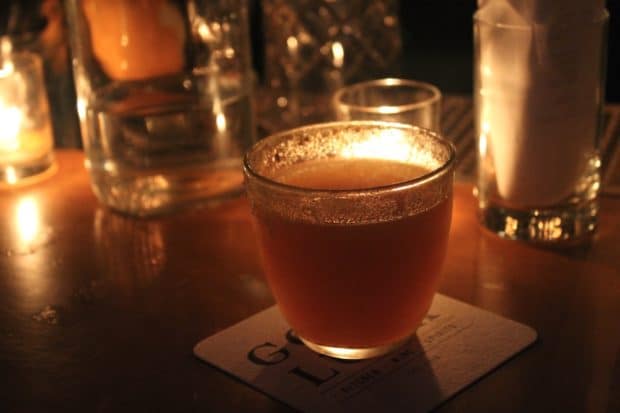 Just around the corner from Lento sits Good Luck, a rollicking bar-slash-restaurant you’d never expend to encounter down an alleyway. Established back in ’08, they’ve already racked up eight years of good luck. The cocktail menu includes tipples on tap (like Moscow Mules), classics (think Manhattans) and originals such as La Escopeta. Marked with chilies, the libation can be spiced to your personal preference, and pairs Espolón tequila blanco with Ancho Reyes — a chili liqueur — some mango cordial for sweet, as well as Serrano chili, Bermuda pepper sauce and orange dust (of course!) If that’s not a convincing enough argument, do note that Esquire mag included on its 2016 list of the America’s best bars. Go. 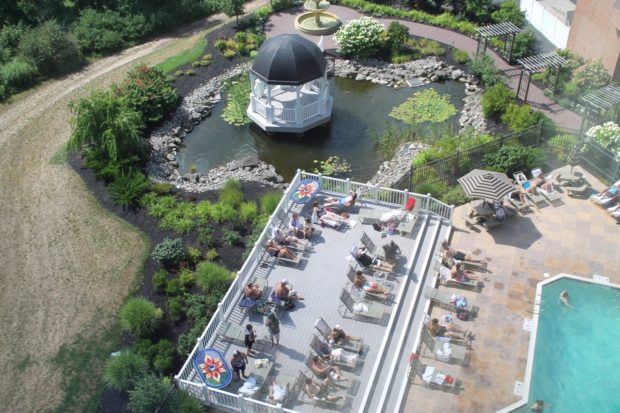 Morning Massage at the Elan Spa

I started my Sunday off on the right foot by promptly laying down again for a massage at the Elan Spa, located smack dab within the Woodcliff Hotel. One of the top spas in town, the place offers a selection of massages including deep tissue, hot stone or, if you’re with your paramour, go for the couples Swedish massage. It’ll relieve any stress and tension you’ve been holding onto and stimulate circulation—much needed before heading out for the day. After, up the relaxation ante with a quick soak in the whirlpool. 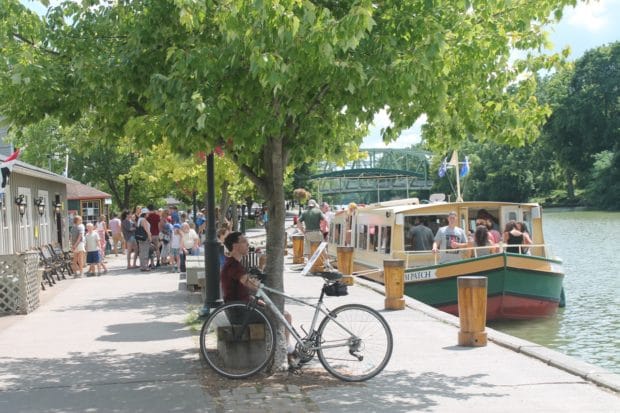 The nearby village (slash suburb) of Pittsford will charm you from the get-go. This place has New England-in-capitals written all over it; the Erie Canal winds and weaves its way alongside a waterfront dotted with businesses that focus on things like beads (Beads ’N Things) or wood (Pittsford Lumber and Workshop). Start with brunch at Erie Grill where they’ll fill your belly with faves like pancakes (topped with seasonal fruit) or the skillet studded with eggs, taters and house-made chorizo made weekly. Pair with a Bloody Mary, and you’re golden. Once full, stroll along the canal towards Schoen Place and, if you’ve time, hop on a boat for a waterside tour. 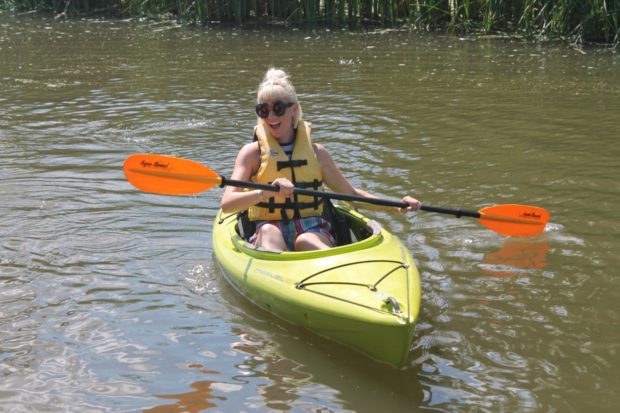 I was somewhat surprised to learn that kayaking in the Rochester area is a feat that is easy to accomplish. The wetlands of Irondequoit Creek are known as Roc’s secret wilderness and water keeners can rent canoes or kayaks from the BayCreek Paddling Centre. Both water vessels are available as singles or doubles (if you’re feeling particularly romantic), and paddling around the cattail marsh is a soothing way to experience nature before hitting the road.