Canada’s East Coast is renowned for its jaw-dropping coastline, friendly people and stellar seafood. Foodies planning a road trip of Nova Scotia should be sure to stop to explore the quaint town of Wolfville. It’s here, in the picturesque Annapolis Valley where you’ll find the epicentre of the province’s food and drink scene.

If you’re looking to tackle a few of the regions wineries be sure to sample the unique l’Acadie grape which thrives in cold temperatures and produces Tidal Bay, a local favourite named for Nova Scotia’s first wine appellation. While Wolfville and the surrounding area is best known for its wine, thirsty travellers will be delighted by world class distillery, cider house, craft breweries and fair trade coffee cafe. 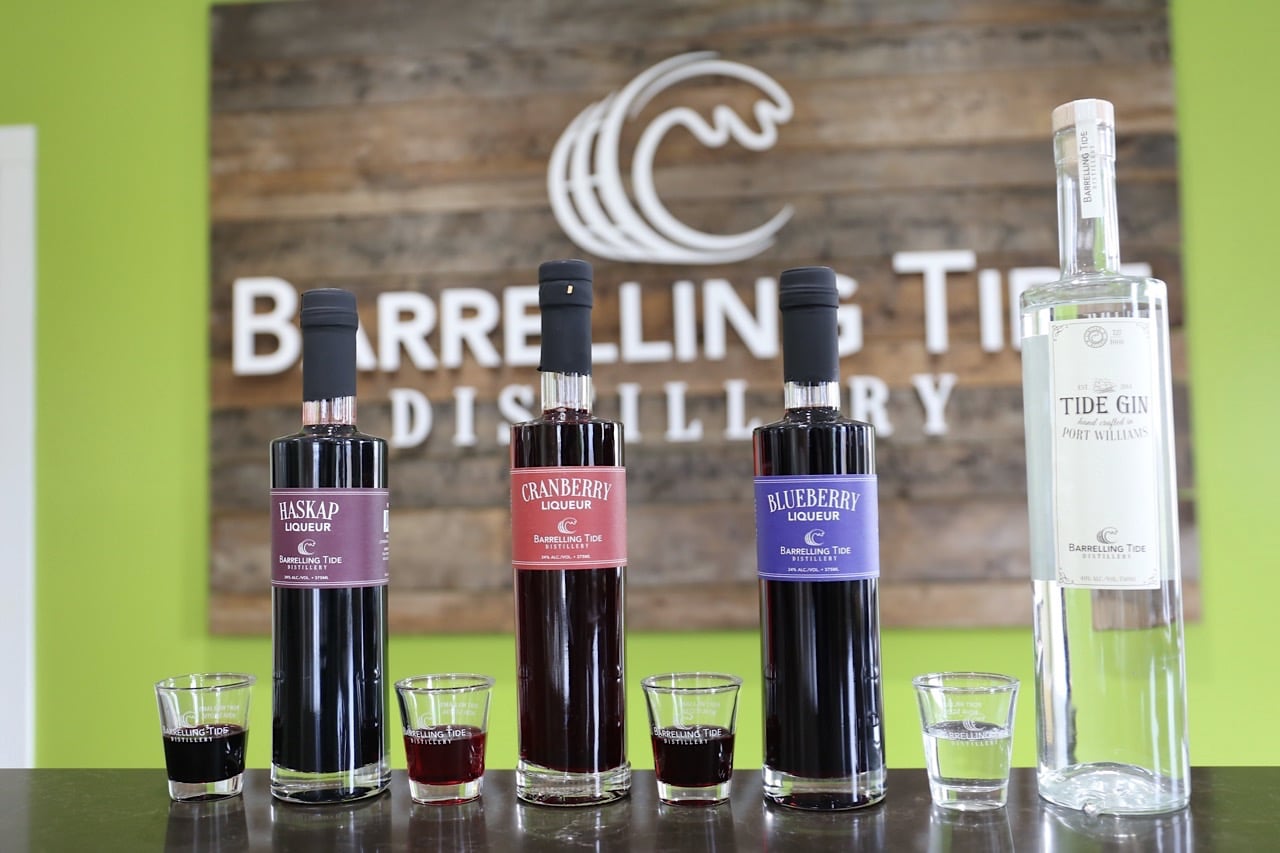 is located on the Cornwallis River in Port Williams. Drop by for a tour and tasting followed by a stroll on the picturesque dykelands overlooking Wolfville. All of the spirits at Barreling Tide Distillery are hand crafted in small batches and utilize the fruit-forward bounty found on farms nearby. You’ll find classic favourites such as vodka and gin but it’s the distillery’s sweet liqueurs that impress most as your slosh a glass of ripe blueberry, cranberry and haksap under your nose. 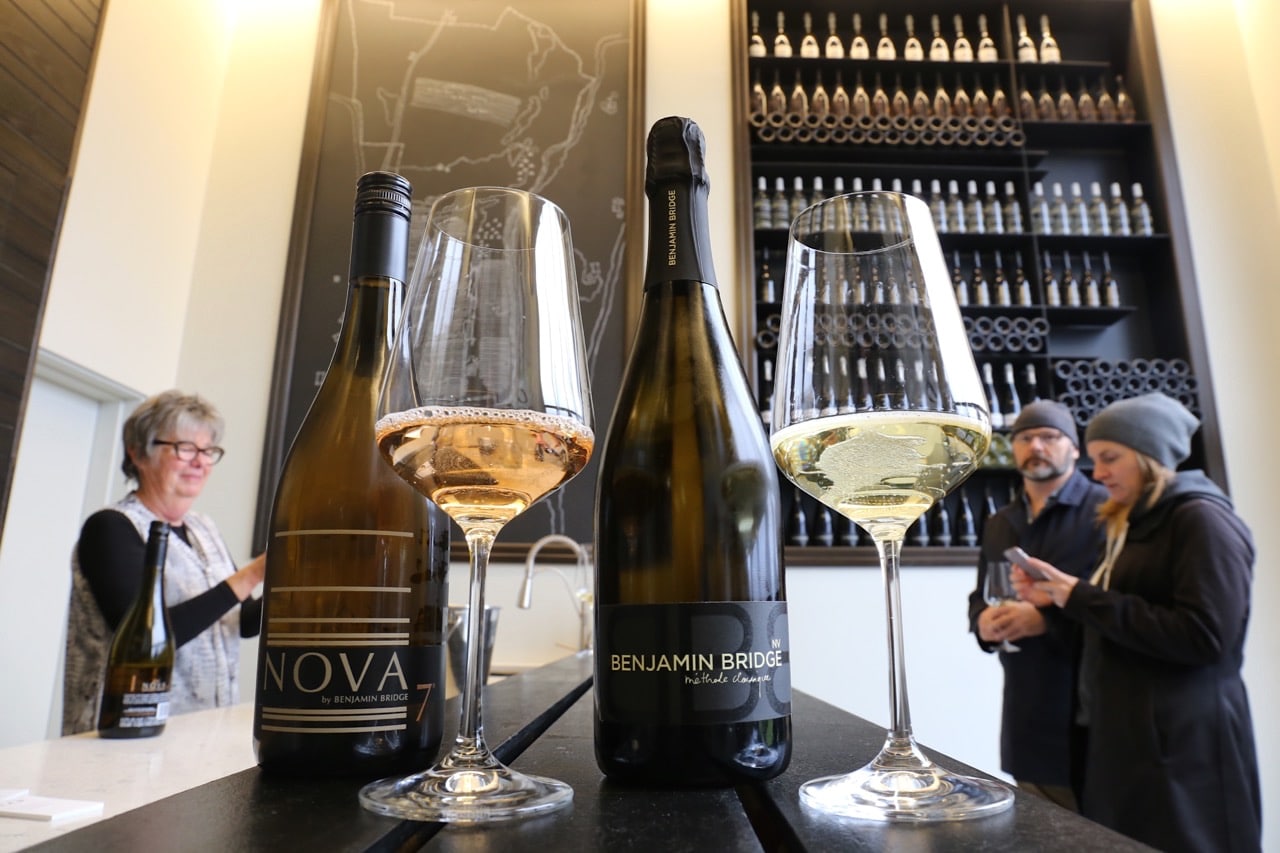 is Nova Scotia’s most celebrated winery, offerings guests stunning views of the Gaspereau Valley on the Bay of Fundy. The winery’s award winning bottles of Méthode Classique sparkling and collection of hand crafted fine wines, including perennial sell-out Nova 7, have helped raise the profile of Nova Scotia terroir and its winemaking around the world. 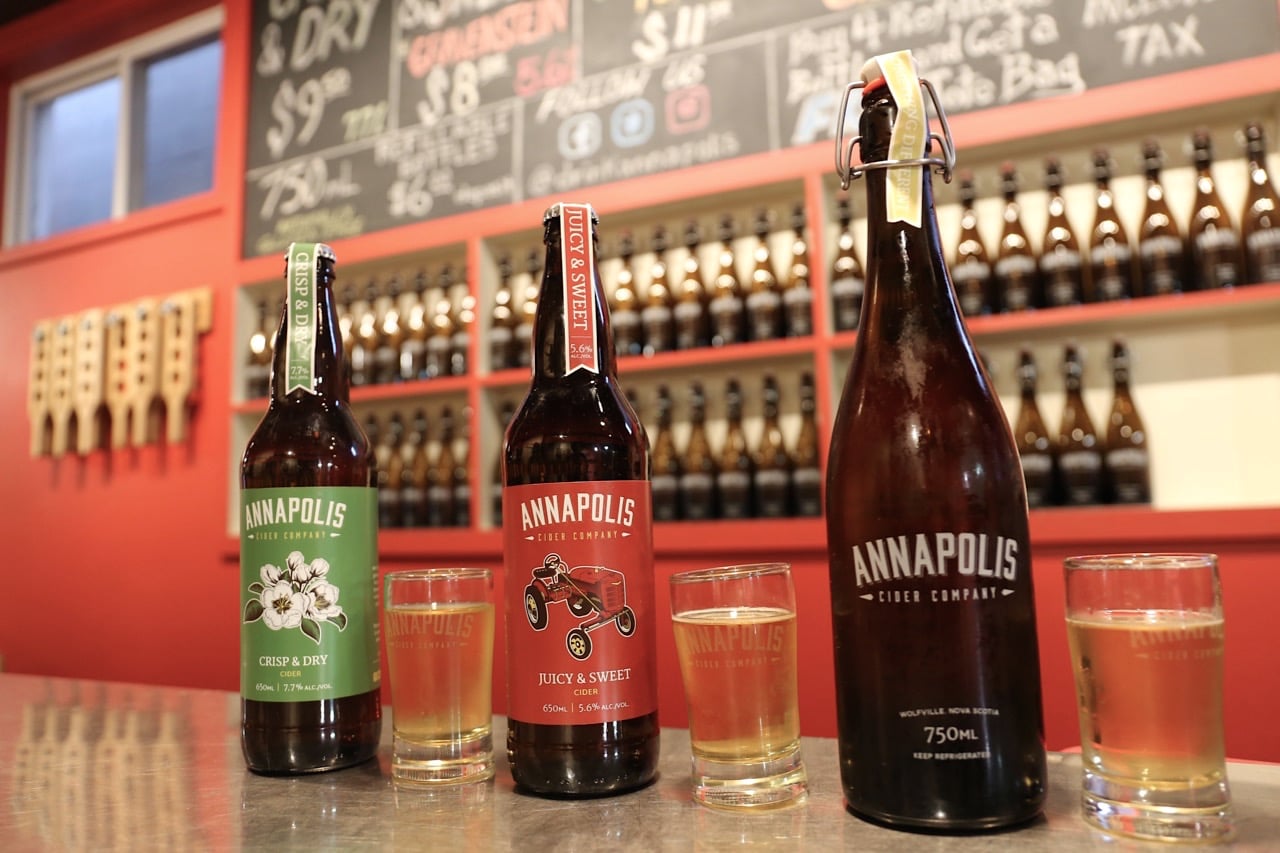 is located on Main Street in Wolfville. The recently launched shop features ciders made from 100% Annaplolis Valley apples which arrive freshly juiced and ferment in tanks on site. Be sure to sip through their two signature bottles: Juicy & Sweet (dry fermented cider muddled with freshly-pressed apple juice at 5.6% alc/vol) and Crisp & Dry (hyslop crab apple combined with a touch of freshly-pressed apple juice at 7.7% alc/vol). 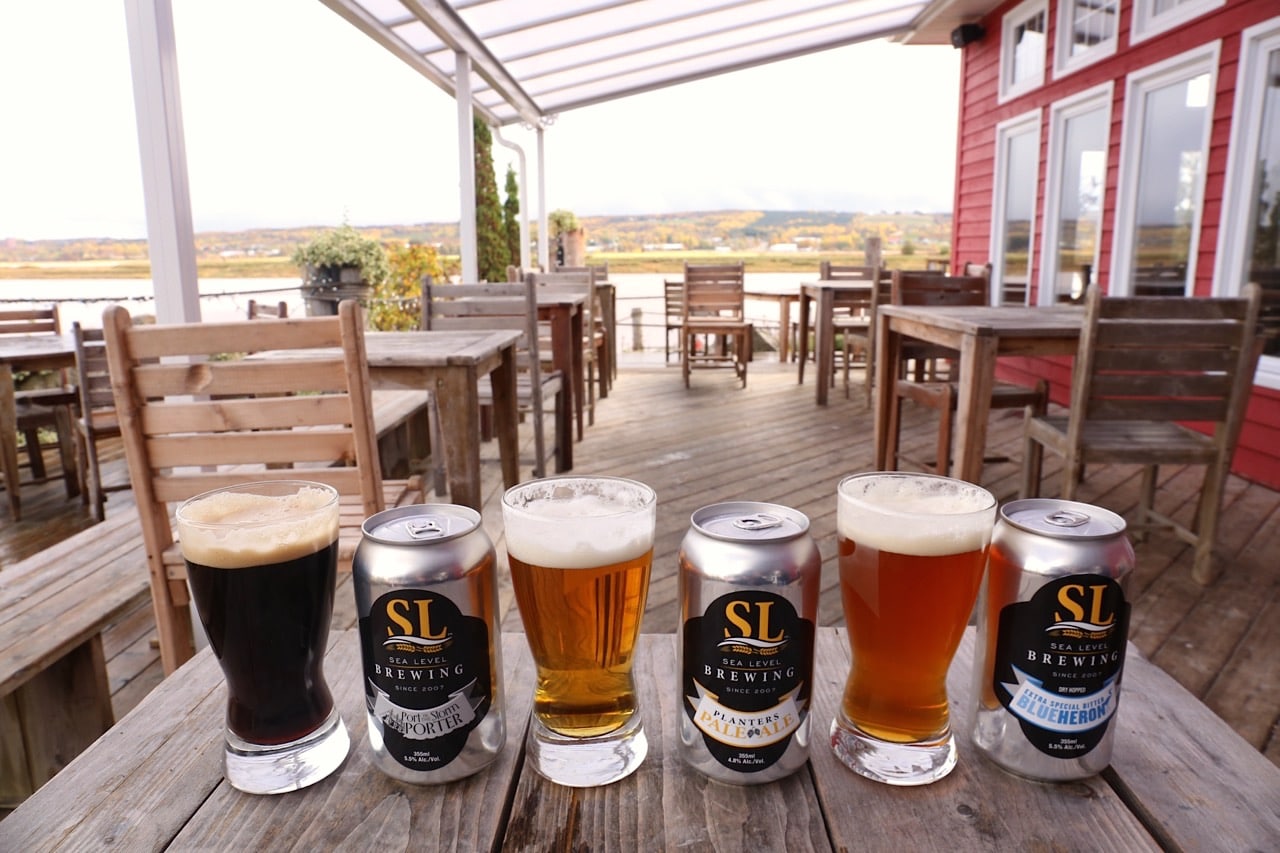 is a micro brewery in Port Williams managed by Brewmaster Randy Lawrence. The petite brewery is attached to Port Pub and offers one of the Annapolis Valley’s prettiest patios. I ordered a flight of craft beer and sipped each to find my fave while a warm breeze wafted over the river. Highlights include Blue Heron Extra Special, Rojo Mojo Red Ale (featured in East Coast Living as the best red beer in the Maritimes) and Blooberry Pail Ale featuring the juice of locally grown blueberries. 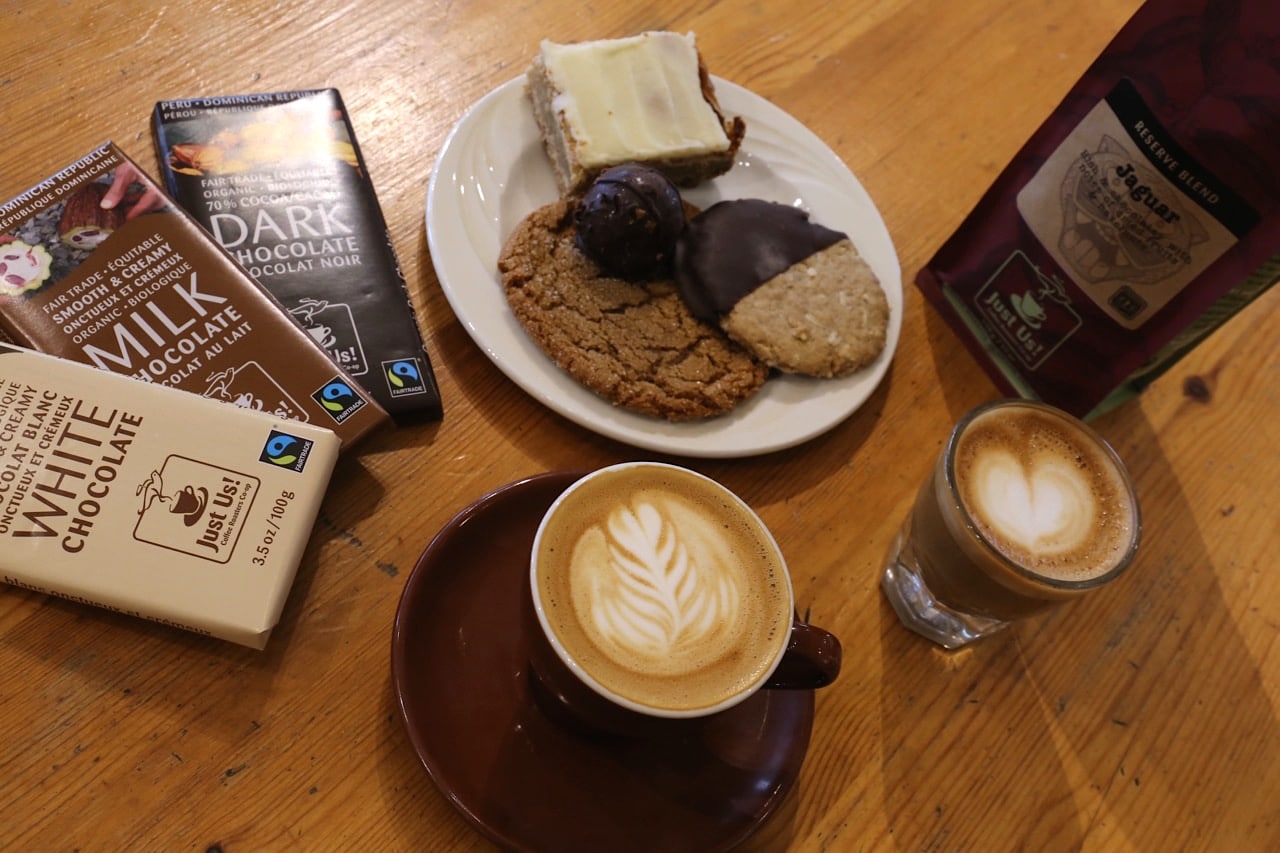 launched in 1995 as a co-op which would become Canada’s first Fair Trade coffee roaster. The company’s HQ is located a short drive outside of Wolfville and features a packed retail shop (filled with bean bags sourced from small-scale organic coffee farms) as well as loose leaf tea and chocolate. If you’re looking to wake up to the world order a frothy latte, best enjoyed with a plate filled with freshly made baked goods. The lemon square and massive ginger snap are so addictive you’ll want to pack up a few for the road.